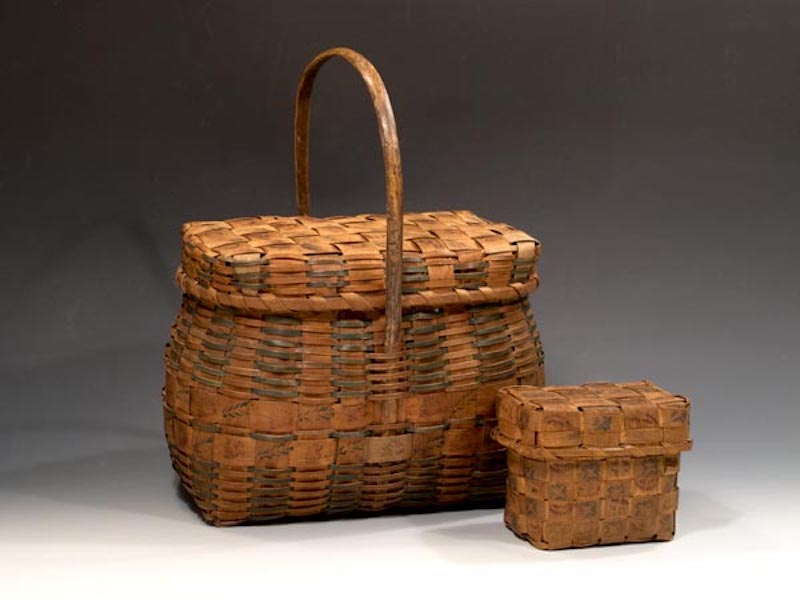 August 10 – December 29, 2013Most Native American peoples weave baskets using various forms of grasses and shrubs, everything from sea grass, used by Eskimos and Aleuts, to willow, bracket fern and redbud used in California and the Great Basin. Fewer use materials derived from trees. On the Northwest Coast, cedar tree bark and spruce root is the foremost material used for baskets. Across the continent, in the Eastern United States, a number of peoples use strips of thin wood derived from the indigenous black ash to make both plain and decorated splint baskets, the subject of this exhibition. Ash splint basketry goes from practical storage and market baskets to fanciful and exquisitely worked decorative splint work with stamped, painted and dyed decorative elements. Men and women collaborate on the preparation of materials and execution of the weavings. Today’s basket makers fine-tune and hone their skill working in traditional as well as with newly inspired shape and decorative elements.Starting in the 19th century basket making became a most important source of income for many Native people. The baskets were sold and traded in many different ways. Basket makers went door to door, to markets, and sold their goods at trading posts where tourist and travelers met. Traders distributed catalogues and mail-order businesses circulated baskets far from where the baskets were made.The circulation of objects and materials through trade, travel and tourism were instrumental in establishing the industry, but today a result of global trade is threatening the industry. The art form is facing a powerful enemy: the emerald ash borer. The beetle was accidentally imported from Eastern Asia in the late 1990s, possibly in cargo pallets. It has killed at least 50 to 100 million ash trees so far and threatens to kill most of the 7.5 billion ash trees throughout North America.A majority of the baskets in this exhibition were on loan from the Ralph T. Coe Center for the Arts, Inc. in Santa Fe, New Mexico
← 2013 The Ralph T. Coe Legacy “Instruments of Passion” exhibition 2014 Woven Relations: Baskets from the Ralph T. Coe Center Collection →