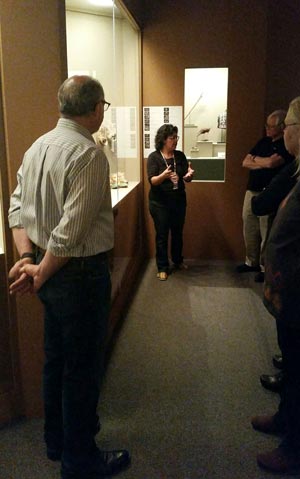 For each event, both visitors and participants were brought together to experience a guided tour of Connoisseurship and Good Pie: Ted Coe and Collecting Native Art, while engaging in compelling dialogue around the nature of collecting and curation. Each walk-through resulted in an amazing and compelling conversation—a series not to be missed. Please join the experience by watching the videos below:

Jonathan Batkin, Director of the Wheelwright Museum; Henriette Lidchi, Keeper of the Department of World Art in the National Museums of Scotland in Edinburgh; and Tad Dale of Tad Dale Tribal Arts gallery and collector. September 29, 2015

Scott Hale of Southwest Art Appraisers, taught at the University of Oklahoma, curator, and author. February 24 2016

Not filmed was the walk-through on April 5, 2016 with Ken Williams (Northern Arapaho/Seneca), manager of the Wheelwright Museum’s Case Trading Post and artist.