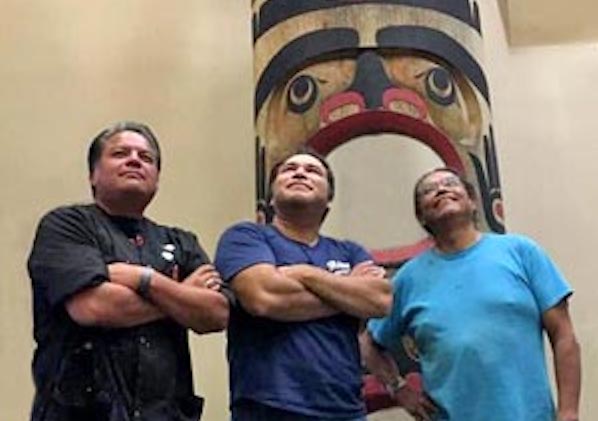 For our first event, IAIA Artists-in-Residence Jason Garcia, Gerry Quotskuyva, and Luke Parnell spent time exploring the Coe Center’s extensive collection of global indigenous arts; finding points of connection and inspiration for their own artistic practice resulting in pop-up curation, including public conversations, investigating how an artist finds inspiration through the work of others and what can be learned from this process. All three artists create work that honors the tradition of Northwest Coast art but are not devoid of contemporary meaning.

Jason Garcia (Tewa) uses his artwork to document the ever-changing cultural landscape of his home of Santa Clara Pueblo, New Mexico. Tewa cultural ceremonies, traditions, and stories, as well as 21st century popular culture, comic books, and technology, influence Garcia’s art. This is his first residency since completing his MFA at the University of Wisconsin.

Gerry Quotskuyva (Hopi) is a member of the Bear Strap Clan from the Second Mesa Village of Shungopavi in Northern Arizona. He currently resides in Rimrock, AZ, where he maintains a studio. His remarkable style has been nationally recognized in various media including public television, newspaper articles and books including “Art of the Hopi” by Jerry and Lois Jacka, “Katsina” by Zena Pearlstone, and “Ancestral Echoes” a ten-year retrospective.

Luke Parnell (Nisga’a and Haida Nations) is a Vancouver-based artist and a member of the Nisga’a and Haida nations and he is both traditionally and classically trained with a bachelor’s degree in Sculpture and installation, a Master’s degree of applied arts, and an apprenticeship with Master Tsimsian Carver Henry Green. This diverse training and epistemology has influenced his practice. “The Burden” the artwork to be completed in Santa Fe, utilizes this training to address issues of ownership and responsibility as an Indigenous artist.