The Ralph T. Coe Center for the Arts presented A View from Here: Northwest Coast Native Arts opening August 12, 2016, through April 2017. On exhibit were exquisite carvings and prints from the collection of Richard and Joan Chodosh. Including works from some of the region’s most 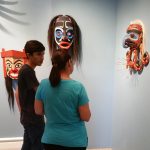 influential artists. A View from Here: Northwest Coast Native Arts, provided a unique occasion for the public to engage with arts rarely seen in New Mexico.Far from the bright sun and high-desert landscape of Santa Fe, Northwest Coast artists create works driven by a cultural heritage deeply rooted in the sea, the rivers, and the forests. The resulting objects represent a complex visual language meant to express relationships of people, oral traditions, and land and sea, through abstracted, flowing continuous lines. In two- 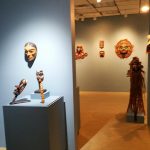 dimensional design and rich carvings, Northwest Coast artists create work that speaks of the inter-changeability of the natural and supernatural worlds as expressed through the movement of dance, ritual, and inherited visual forms passed down through the generations.A View from Here: Northwest Coast Native Arts expressed a form of cultural agency, defiance, and self-preservation, as the represented artists all work to create formal continuity with a past that faced severe restrictions and violent suppression. Artists such as Bill Reid, David Boxley, Beau Dick, Dempsey Bob, and the Hunt family, among others, were leaders active in the resurgence of Northwest Coast art and other traditions, including most significantly potlaches, which were long banned in the region. As Richard Hunt (Kwa-Guilth) explains, “It is a great way to go through life, loving what you do for a living and owning the culture that belongs to you.” The power of that cultural ownership is apparent in every chisel stroke and surface detail of the works gathered in this exhibition.This opportunity to view such works, alongside the Coe Center’s own diverse collection of historic and contemporary material from across North 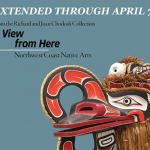 America and beyond, expanded the conversation around Native American art in Santa Fe.

Richard and Joan Chodosh have been collecting Northwest Coast art from artists and galleries for over forty years. The cultural meaning of the works continues to inspire and influence the Chodosh’s selection, as well as their continued admiration for the people and arts of the Pacific coast. The collection spans the time period of great revival and resurgence of Northwest Coast First Nations ceremonialism that for three generations had been suppressed and legislated against in Canada. The Chodoshes are fortunate to include pieces in their collections from revival leadership, including Bill Reid, David Boxley, Beau Dick, Glen Rabena, and David Neel. 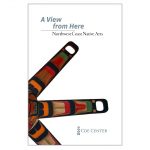 “A View from Here” catalog Click to see more!

Accompanying the exhibition was a small full-color catalog.