Unknown (Pomo, Mendocino and Lake Counties, California), Feathered Gift Baskets, c. 1900. Two single rod baskets are woven on a foundation of willow sticks and sewn with sedge roots. Yellow feathers are from the breast of the meadowlark, and iridescent green feathers are from the head and neck of a mallard duck, both baskets trimmed with quail top knots. Yellow: 2.25 in. diameter (5.7 cm); iridescent green, 2 in. diameter (5 cm). NA0538ab.

Pomo basket makers are widely admired for their breathtaking skills, as seen in these miniature baskets. Each is a virtuoso performance of selecting, harvesting, preparing plant materials, and the artist’s choice in using either all yellow or all iridescent green feathers. The feathers are not applied after the basket has been woven, but are an integral part of the weaver’s conceptualization and the artistic process with each feather being carefully placed under a stitch before the stitch is pulled and tightened. 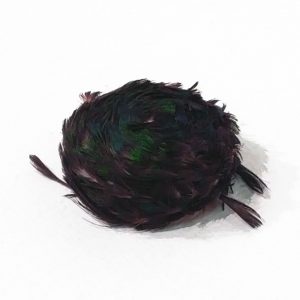 Creating a miniature basket requires exquisite skill to accommodate the reduced size of materials used, and that although the piece is smaller, it must still be strong and resilient. Weaving it is exponentially more difficult. The maker(s) of these baskets have chosen not to trim the feathers, leaving them long, which creates a pattern. The quail plumes used on each basket’s lip elevates the rim outward and upward, beyond the bowls’ own presence. Combined with the beautiful natural colors, the basket seems to hover in a corona separate from its physical body.

Miniature and feathered baskets were made as payment for doctoring by Native healers; gifts to mark life’s stages such as births, marriages, and deaths; as well as to trade with merchants for food and other manufactured goods such as cloth, and metal and chinaware containers.

Baskets provided much-needed income to purchase back their lands for Pomo people in Lake and Mendocino counties. Decimated by planned genocide and systemic racism, Pomo peoples did not shrink from continuing their cultures and societies. They adapted and kept their traditions and mixed them with new ideas and products. Selling baskets to voracious basket collectors of the early twentieth century is an example of Pomo people’s and communities’ survival and strength. Using Pomo artistic legacies and money earned from sales to purchasing back their lands to live with dignity and sovereignty is the ultimate dramatic irony. Purchasing back their homelands helped Pomo people to endure as a people and lift themselves above the destructive governmental policies and actions. 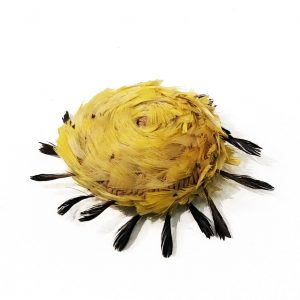 Ted purchased this pair of baskets in the 1960s. They were included in the 1976-77 Sacred Circles: Two Thousand Years of North American Indian Art exhibition. In his records, he suggests the same weaver made them. While we cannot dismiss this idea, there is no hard evidence to rely upon other than the two miniature baskets themselves, which offer enticing, but inconclusive information that the same weaver made the pieces. Like many historic Native artworks, the maker names are absent. Sometimes this is because of language barriers; other times, it was to protect a dealer’s basket sources from other buyers. However, primarily the lack of names and the assignment of the general terms “Pomo” and/or “Indian” decries a misperception by the dominant culture of Native people as being homogenic. Unfortunately, we hear or read of this mistaken classification through words like “race” and/or “The Pomo.”

For baskets, “experts” abide by a set of diagnostic features that they use to identify a basket’s tribal origin, like materials and how the basket starts and finishes. These are important, but using them in the absence of considering the people who made them and the vicissitudes facing a weaver, removes the human aspect, and replaces it with a mechanistic viewpoint. It is akin to scholars putting Native artists into Anglo art classifications that have nothing to do with their motivations and, therefore, excludes meanings of Native conceived and produced art. Historic Native artists do not belong to European and American art categories and movements. Rather, we must understand and write about Native art on its own terms and language. Woven into these two fine miniature baskets is the woman’s understanding of her world and its values, and the principles that are part of her being as a Pomo person.

The Coe Center is working hard to ensure that we, and our visitors, see the people behind the Native art objects first. Putting people first places the object within the culture and its heritage and its families. Placing objects back within the contexts of its making allows us to “see” and recognize and appreciate more of the object’s beauty. Yes, indeed, there is an intangible of aesthetics in how we perceive and understand beauty.

Consider for a moment that a less than perfect pot is sitting on your mantle; it is incredibly beautiful because its acquisition started a life-long passion and friendship. I may not see that when looking at the pot, but you certainly do each time you look at it. Beauty is not hardwired in humans but something we train ourselves to know. So, it makes perfect sense that when we see a basket maker’s motivations and cultural surroundings, we can increase our ability as appreciators and judges of what we consider to be beautiful and meaningful.

Truly one of the wonderful aspects of the Coe collections and Ted’s curatorial work is how hard he worked to orient his viewers and readers to see artists first. It is not happenstance that he went from the objectivity of all historic art in Sacred Circles to the people-centric viewpoint of his next major exhibition, Lost and Found Traditions: Native American Art 1965-1985. The two exhibitions had equal doses of beauty to appreciate. The shift in Ted’s curatorial work from absorption to reflection is the difference in his intent between the exhibitions.

Ted wrote about these two baskets: They have about them an unassuming dignity which alludes to one of endless facets of poetics and aesthetic sensitivity, which defies definition because of the complexities involved with Pomo basket artistry. But it has to do with a rare modesty to which nothing could be added to the statement already made.