Hours walking over the old village…

Nampeyo (1859-1942) was a widely influential potter who lived and worked at Hopi. She is regarded today as one of the finest Hopi potters and one of the most important figures whose work is displayed in museums and collections around the world.

The Coe Center is fortunate to include in its collections three ceramic pieces by the Nampeyo. In addition, the Coe collection includes a Polacca Polychrome jar (1860-1900), the type of pottery that her grandmother made and taught the young Nampeyo to make. Also, in the Coe collection is an Ancestral bowl, generally known as Sikyatki pottery (1375 to 1625 CE).

Much of the pottery produced since 1890 at the Hopi Mesas was inspired by Sikyatki pottery, named for the Ancestral village on the far eastern edge of First Mesa, where the pottery was produced and used by families and the community. Sikyatki wares inspired Nampeyo. She and her husband, Lesou, spent many hours walking over the old village, studying the potsherds. 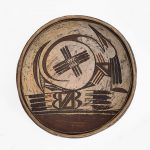 Nampeyo produced these bowls around 1893. The change from one style to another style of pottery is neither sudden nor complete; here, Nampeyo combines two pottery styles, the designs an inventive interpretation of Sikyatki iconography and the thick white slip characteristic of Polacca Polychrome. Both bowls include ecstatic bird forms morphing into prayers and plants. Nampeyo used expanding and contracting forms to develop volume and to help move the 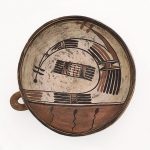 viewer’s eye across her painted surfaces. Pot NA1272b includes thick-lined triangular forms adapted from circa 1300 San Bernardo wares, the precursor to Sikyatki pottery. Both bowls were formerly in the collection of Lucy Davidson Peabody, who was an early champion of the American Southwest Indigenous cultures and was instrumental in establishing Mesa Verde National Park.

Rather than simply creating copies, Nampeyo chose to reinterpret these ancestral designs. The quality, consistency, and enduring popularity of her works led to her becoming one of the most important figures in the history of Pueblo Indian artwork. Many of today’s Hopi potters—which includes many of Nampeyo’s descendants, do exactly as Nampeyo did, recreating and reinterpreting the works of their ancestors. Because of Nampeyo and the other potters of the twentieth century, Hopi pottery persists and is broadly collected today.

Nampeyo was an artist who lived to experiment and who was intellectually engaged in contemporary and Ancestral pottery making. Moreover, she was an extraordinarily skilled potter—her technical skills of mixing clays and controlling the open fires that serve as kilns at Hopi surpassed the other potters of her generation. In addition, the steady lines and forms that she painted reflected her keen aesthetic sensibilities. Through experimentation in the 1880-1900 period, Nampeyo located clays and firing materials, experimenting with techniques to turn her pottery yellow, orange, or white. She taught herself to stone polish slipped surfaces for a smoother and better finish on which to paint her iconography, through which she displayed her vast knowledge of Hopi cosmologies and religious practice. She truly revolutionized Hopi pottery through its reconceptualization and development of a new market. 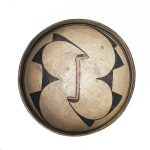 This is another early example of Nampeyo’s work, incorporating glazed Polacca slip with a minimalistic interpretation of a Sikyatki design in two colors. The red form might be a prayer stick or a type of stick used to kick in competitive activities designed to bring blessings and moisture to Hopi agricultural fields.

Polacca Polychrome (1780-1900) was the style of pottery made at Hopi in the tumultuous years following the Pueblo Revolt and Spanish Re-conquest (1680-1700). Hopi potters also learned about Zuni and Keresan pottery due to successive decades of drought that required Hopi people to move to Zuni to farm. During other drought years, Zuni people moved to Hopi to be able to farm. As a result of the movement of people, Zuni and Keresan iconography was adopted by Hopi potters. Polacca Polychrome is identifiable by its crackly slip, untidy painting style, and use of Zuni pottery designs. 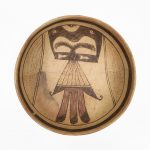 This is the style of pottery that intrigued and inspired Nampeyo. Note the yellow color clay and smooth surface, a thick band at the opening with a line break, and an abstracted design surrounded by stippling. As non-Hopi people, we cannot accurately read the design; we have neither the cultural knowledge nor are we living one-half millennia ago to learn, practice, and speak the language embodied in this bowl. However, Nampeyo, like other Hopi potters and people, understood the pot’s reference points or language. Perhaps we can suggest that the combination of iconographic elements appears to be a person or one of the Hopi Katsinas or deities. Or we might see the eagle tail at the bottom of the figure and a flower serving as its body, which we might suggest as prayers represented by feathers and birds to bring moisture which grows flowers.

Nampeyo learned to make Polacca Polychrome from her paternal grandmother, a Walpi potter. Her mother-in-law was also from Walpi. Living in a matrilineal society, Nampeyo traced her primary and residence lineage through her mother; therefore, Hano was her home. In contrast to the crackly yellow and brown wares of her grandmother’s village, the Tewa-Hopi village of Hano made plainware large storage jars and canteens. Hano’s Tewa ancestors had established the village in the post-Pueblo Revolt era, seeking refuge from further Spanish persecution. The Tewa were invited to settle at the western edge of Hopi in exchange for protection from marauding Navajo and Ute tribes. 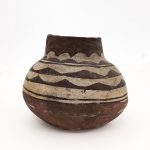 Polacca Polychrome (1780-1900) was the style of pottery made at Hopi in the tumultuous years following the Pueblo Revolt and Spanish Re-conquest (1680-1700). During the eighteenth and nineteenth centuries, successive decades of drought required Hopi people to move to Zuni to have enough water to farm. During other drought years, Zuni people moved to Hopi to be able to farm. As a result of the movement of people, Zuni and Keresan iconography was adopted by Hopi potters. Polacca Polychrome is identifiable by its crackly slip, untidy painting style, and use of Zuni pottery designs. The Zuni designs on this jar are the wavey designs at the jar’s shoulder and the body. The jar is typical of Polacca C style, the type of pottery made at Walpi, Nampeyo’s grandmother, and mother-in-law’s village.

There are a few researchers who suggest other superb potters were working during the same late nineteenth century period as Nampeyo, although there is no documentation or information as to who these potters might be and whether they might be from Hano or Walpi. The best potters’ work is neither stagnant nor repetitious. It does seem irresponsible in crediting every well-made and Sikyatki-inspired pot of the late nineteenth century to Nampeyo because it discredits the skills of anonymous artists and suggests Nampeyo as the sole source and progenitor of every excellent Hopi pot circa 1900. But Nampeyo perhaps was that much better than her contemporaries. 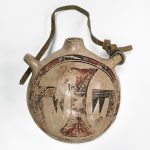 The Sikyatki Revival style of pottery was shared by Nampeyo with her daughters and community. By about 1900, it had replaced all other styles of Hopi pottery. In the pre-1900 era, Tewa-Hopi potters made plainware canteens, as seen in the historic photograph. Canteens were either large gallon-sized or small, individual-sized. This canteen was most likely made for sale as evidenced by its in-between size and the use of bowl designs to decorate its surface.

Nampeyo’s work is instructive in teaching us how innovation can be applied to inherently artistic conservatism. The techniques used by potters do, indeed, suggest the potters are individualists; personal habits and preferences appear in their methods of shaping, decorating, and firing pottery. Their paste and paint are not always the same; they measure with cupped hands, judge consistency by taste or feel. Form, finish, and, most of all, decoration, are the diagnostic criteria that visually distinguish the wares of one potter to the next. But not every potter is immensely talented as was Nampeyo. As with any art form from any culture or time period, Nampeyo pushed Hopi pottery toward new forms and ideas, creating a school or style. But while the larger body of Hopi potters created pottery in less lofty ways, their work is of equal importance because it forms the foundations of what we identify and know of as Hopi pottery. And it is only through their conformity that we can define and identify Nampeyo’s genius.

Nampeyo was less interested in innovation than perfection and took an early interest in Hopi Ancestral pottery, which she believed to be superior to the pottery being created by her contemporaries. Her enduring work emphasizes aspects of objects that are beautifully expressed in visual form yet exist beyond the aesthetic. These include intangible hereditary properties—the expression of ancestral, cosmological, and ceremonial relations—as well as ontologies that do not center on the human subject.

← An Unassuming Dignity The voice woven into my sister’s clothes… →