James Kivetoruk Moses (1903-1981) was a self-taught Inupiaq painter who created profoundly perceptive narrative works about the Seward Peninsula region of northern Alaska and its Indigenous peoples, histories, and environment. His images provide rare glimpses of Alaskan Native life in the early and mid-twentieth century, as modern technology increasingly encroached upon traditional lifestyles and subsistence hunting. The Coe Center is planning an exhibition of his work to open in summer 2021.

In 1954, when injuries from an airplane crash ended his hunting days, Moses began a new career by teaching himself to paint. Through his work, he was able to retain and share his life as a fur-trapper and subsistence hunter. With a passion for accuracy, his pencil, watercolor, and ink paintings portray landscapes, animals, and people in intimate detail. Kivetoruk Moses painted community and historical events, forming a vast remembering of Inupiaq traditions and oral narratives, people, historical events, and details about his hunting days.

Kivetoruk Moses’ works are generally not dated, but his mature style and self-assured rendering suggest that this piece dates from the last two decades of his life. This image depicts the story of The Giant Eskimo—the story of three brothers. The mightiest of the three was the only one able to swim the cold and wide Buckland River.

The narrative, as detailed by Moses in an accompanying text, also explains the presence of large, abandoned house structures. We might even learn about Inupiaq values and culture; the sending away of two brothers, and the strongest and largest of the three being kind—as indicated by his being of great assistance to his family and community. Included within the tale are details about the values of hunting, the timing of hunting and fishing, and the care taken to preserve fishing success for the community.

The narrative takes place at Cape Espenberg, near to where Kivetoruk Moses was born and raised. The area is covered with extensive ancestral Inupiaq sites, which might explain the story’s reference to unfamiliar house types from times past. Finally, Kivetoruk Moses uses Eskimo, a term no longer used for Inupiaq people or as a general term for all circum-polar Indigenous populations.

The narrative was probably recorded by his wife and embraces Kivetoruk Moses’ spoken word. All of his paintings are his own life’s narrative, whether actual events or recorded local stories.

We assume, too, that The Giant Eskimo documents Kivetoruk Moses’ personal travels and familiarities, and his deep understanding of the natural cycles of the Seward Peninsula. They explain the world as it was created, as it continues, and the lessons one can learn by being a careful observer of the natural and cultural worlds. 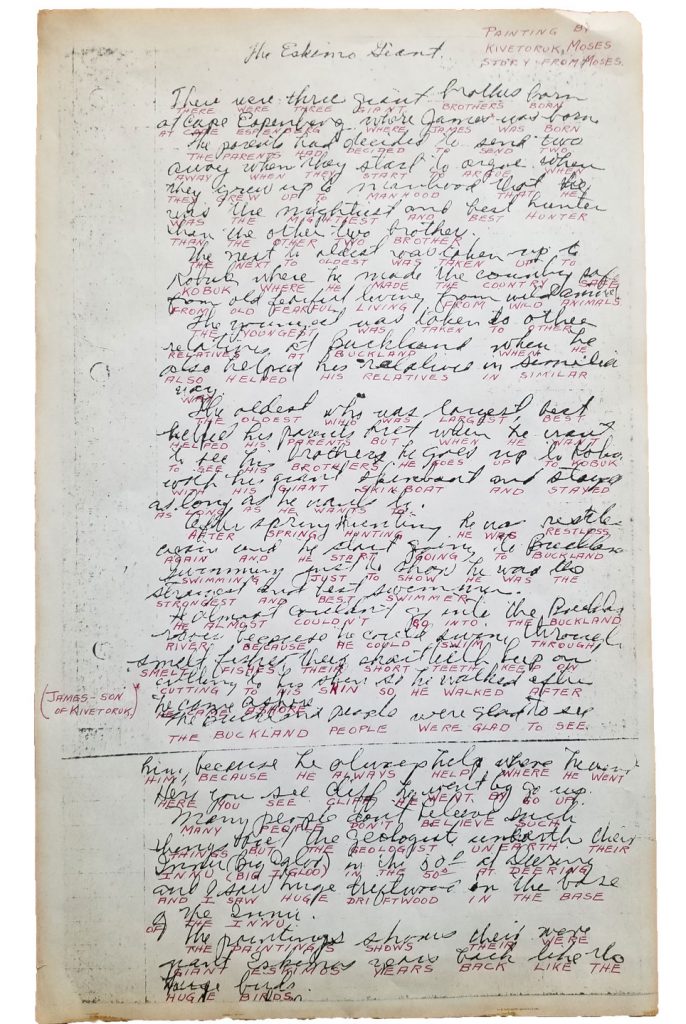 There were three giant brothers born at Cape Espenberg where James [Kivetoruk Moses] was born.

The parents had decided to send two away when they start to argue. When they grew up to manhood that he was the mightiest and best hunter than the other two brother.

The next to oldest was taken up to Kobuk where he made the country safe from old fearful living from wild animals.

The youngest was taken to other relatives at Buckland when he also helped his relatives in similar way.

The oldest who was largest best helped his parent but when he want to see his brothers he goes up to Kobuk with his giant skin boat and stayed as long as he wants to.

After spring hunting he was restless again and he start going to Buckland swimming just to show he was the strongest and best swimmer.

He almost couldn’t go into the Buckland River because he could swim through smelt fishes their short teeth keep on cutting to his skin so he walked after he came ashore.

The Buckland people were glad to see him, because he always help where he went.

Here you see [in the painting] cliff he went by go up.

Many people don’t believe such things but the geologist unearth their Innu (Big Igloo [house]) in the 50s at Deering and I saw huge driftwood in the base of the Innu.

The paintings shows their were Giant Eskimos years back like the huge birds.    —James Kivetoruk Moses

← SPRING IS FOR THE BIRDS An Unassuming Dignity →