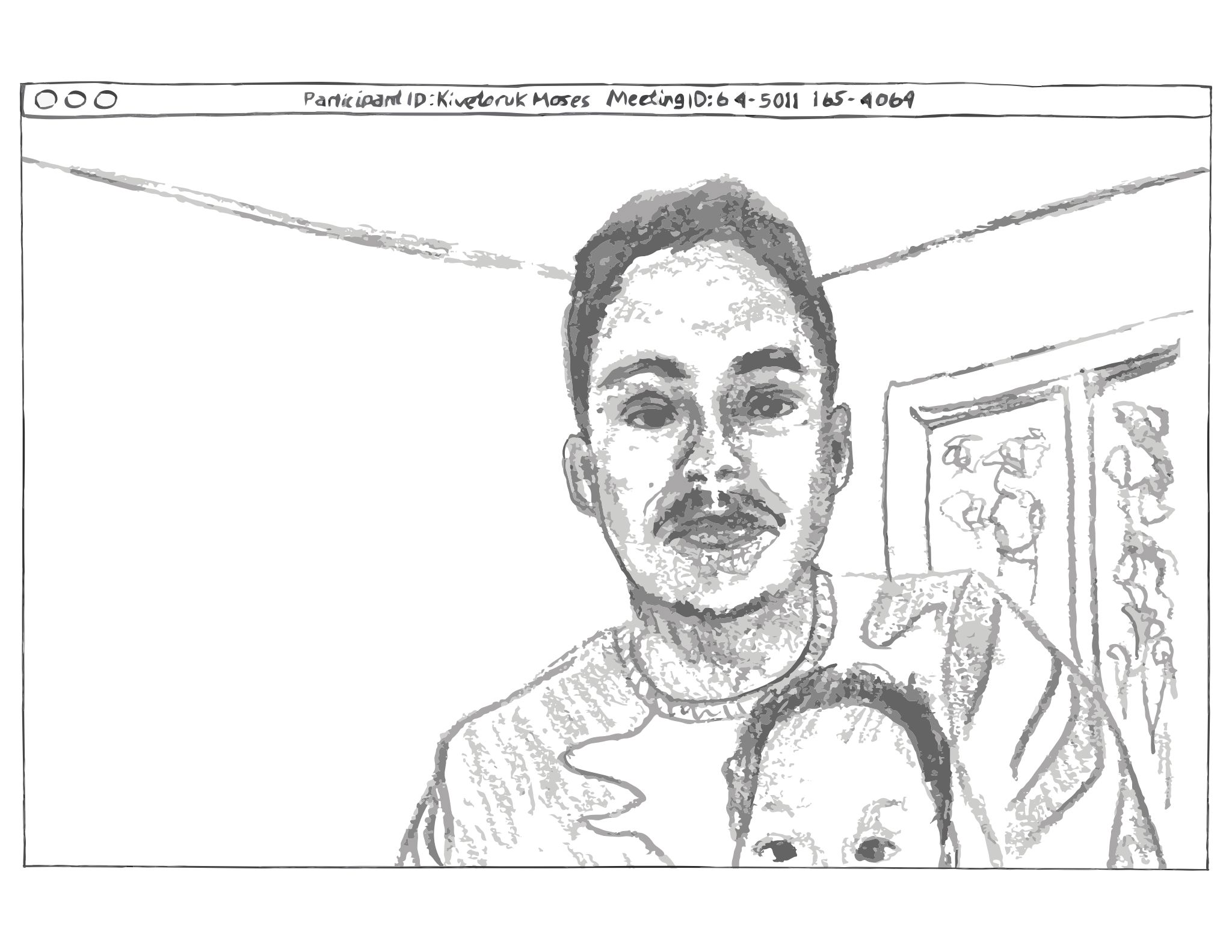 Howdice Brown III is an Iñupiaq filmmaker living and working in Anchorage, Alaska. A graduate of the University of Alaska Anchorage, he has spent the last ten years in the commercial film and documentary industry. Throughout his career, Howdice has traveled from Western Alaska to Southeast, the Aleutian Islands to the YK Delta, and from Norton Sound to the North Slope, working on projects related to culture, art, history and health. He has been a part of three Northwest Region Emmy nominated documentaries, two of which have won:  Kîtch.Kåan: Our Native Legacy (2012), and Cold Water Survivor (2013).

Kivetoruk creates a scene in his work in which Indigenous viewers read from their contextual knowledge, pulling from personal memories of data shared through oral histories. Thus, an essential aspect of the critique of Kivetoruk’s work must come from a collective interpretation. To curate Indigenous artworks, perhaps the best method is to visit.

Melissa Shaginoff: Hi Howdy, what did you think about the work?

Howdice Brown: I hadn’t seen or heard of the artist before, so I was really excited to see these pieces. The Nome region, Bering Strait, is actually where my family’s from. That was exciting to me as well. I’m always trying to learn more about that and document it for myself.

Melissa Shaginoff: Awesome. Tsin’aen, thank you. Well, which piece would you like to look at first?

Howdice Brown: As I was skimming back through this, this one popped out to me…this one just definitely reminded me of my great grandmother. I’m not exactly sure where this is per se that this piece was created, but my grandmother, Lorraine David. 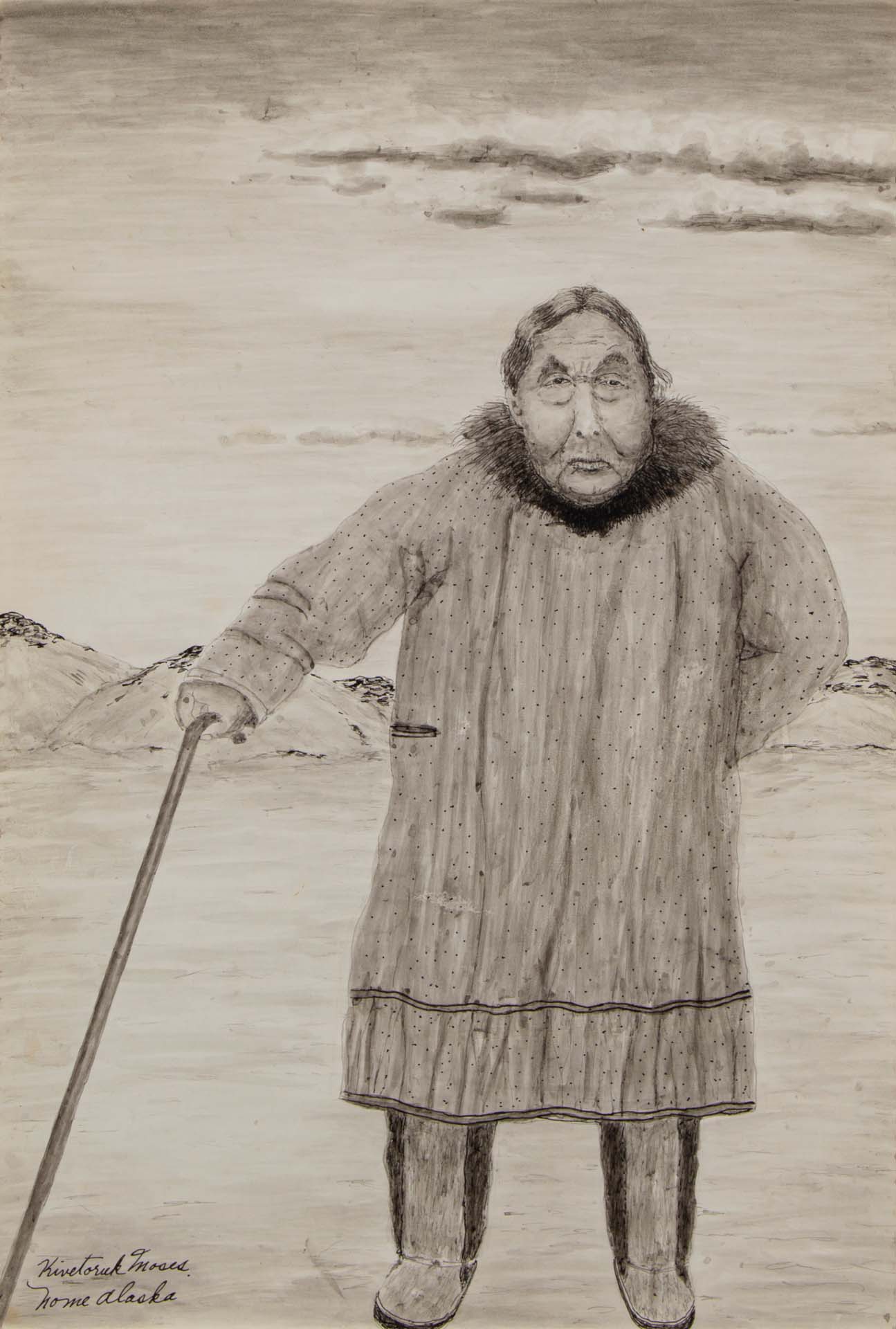 Melissa Shaginoff: What about it reminds you of her?

Howdice Brown: This one reminded me of her; she passed away when I was maybe right before twelve or eleven. She did not really speak that much English or at least didn’t really like to speak English. I remember just her wearing this kind of clothes. I’m sure she wore more modern clothing, but for some reason, I remember her in this way. I guess I also relate that to when I traveled to Elim, which is east of Nome.

I brought my (great) grandmother to Anchorage for a doctor’s appointment and I took a photo very similar to this of her, with a cane, while we were visiting, and she was telling me stories about where she was born in Elim. It is just a certain remembering. Maybe it’s the look of this painting, and it makes me think of seeing her in that community. I never got to see her in Elim. I only got to see her in Anchorage at the end of her life. 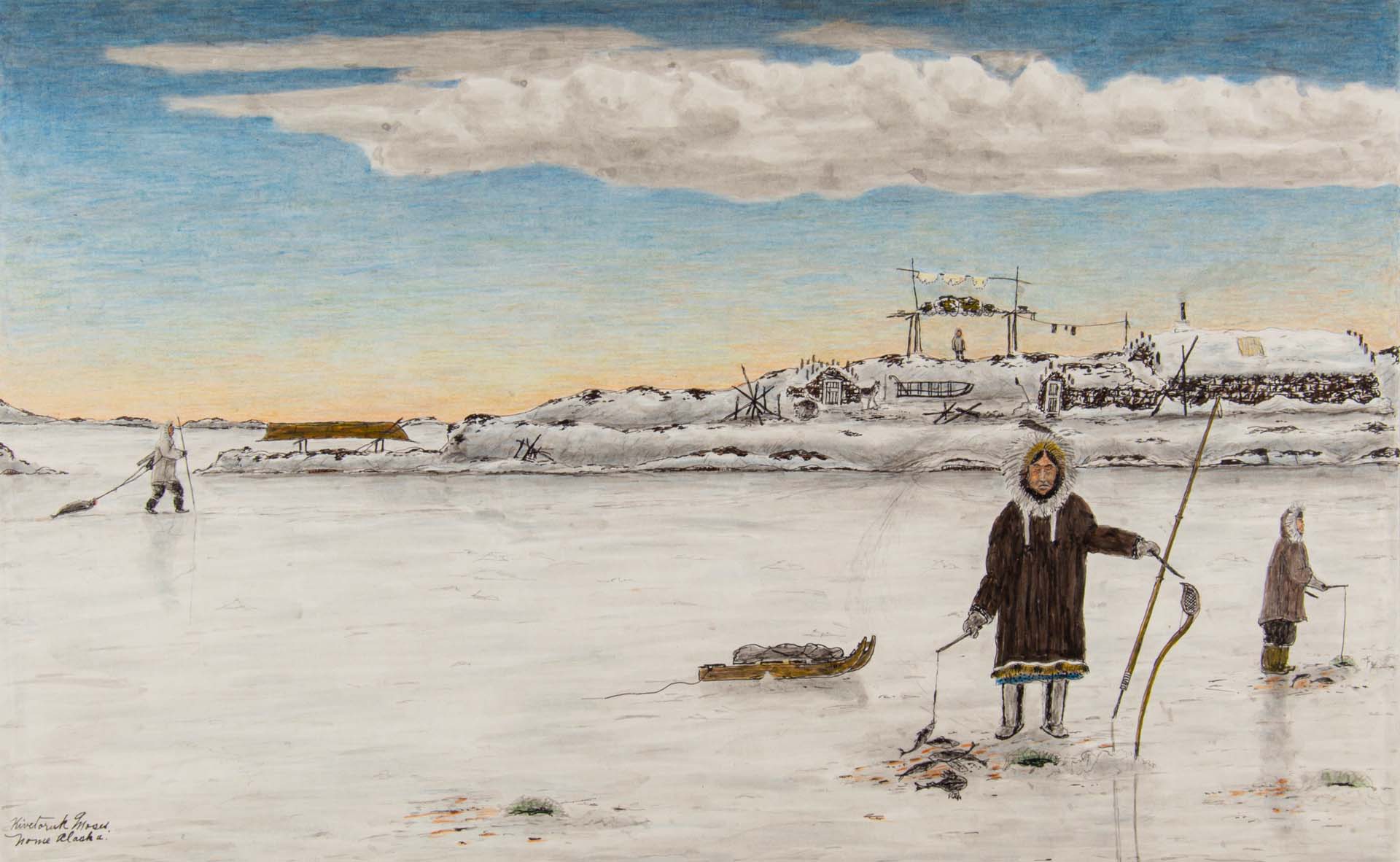 Melissa Shaginoff: So the next one you would like to look at is this ice-fishing scene?

Howdice Brown: I think so. Yeah.

Melissa Shaginoff: I didn’t really look at this one yet before. Wow. Have you been ice fishing?

Howdice Brown: I have, only down here in South-Central Alaska or out in the valley.

Howdice Brown: Really? My dad loves it. He goes all the time. This might be something kind of funny that doesn’t need to make the recording, but because you can only get trout, for some reason, it’s not very exciting for me, because it’s quite a bit of effort for such a small…

Howdice Brown: They’ve got a good system, though. I always have wanted to watch and learn about this type of ice fishing with these types of tools.

Melissa Shaginoff: Do you recognize anything that’s in the picture? These little tools?

Howdice Brown: I do. I don’t know the names, but I remember my dad telling me stories about them actually pulling king crab out of the ice holes that they would dig right outside of Elim. He said they would come out as big as he was. I think there’s quite a few interesting stories that he tells out of his time in the village out there, and I’m like, “Oh my gosh. That was amazing.”

Melissa Shaginoff: Well, so it looks like they use this pole. They keep it untangled by stretching it between these two sticks to dip it in. Then they have this spear as well.

Howdice Brown: It looks kind of like a scoop, possibly to scoop out some ice that builds up there and to keep it clean. I think what I really enjoy about this piece is just the level of detail in the whole image, the reflections on the ice. It looks like morning to me. Everybody’s already up doing these activities to get going. I really like the composition of it. In filmmaking as well…I like the angles and where things are pointing to…It is a part of it if you are following those lines. “Where’s the eye leading?” A lot of times with film, you have to really do that pretty quickly because you’re moving people’s eyes to different areas. This one, yeah, it does feel like there’s the community, and the whole scene, it feels important. Even this guy over here coming back, or this person. I can’t tell if it’s a guy, but this person coming back from a successful seal hunt. It’s just really well composed

Melissa Shaginoff: Yeah. I thought you’d probably pick a piece like this, being a filmmaker and looking at the whole scene and how it’s set up.

Howdice Brown: There’s a thing that people talk about. Neo-noir in film. It’s a different style of filmmaking during early filmmaking or the Golden Age, or something like that. They have a lot more sitting with a scene or even letting it play out like it’s a real event. If someone comes up to a window and they’re buying a ticket to a train or whatever, and it plays out. In today’s cinema, they’d just boom, boom, boom, cut, cut, cut to try to move things along. But with neo-noir, I think they were describing more. The person gets the ticket, and they leave the window…and it feels like it’s just letting it play out, and you are not sure who you are  actually supposed to be focused on, on purpose. Your focus is just everybody.

Melissa Shaginoff: Wow, that’s interesting. Well, is there another one you’d like to talk about, look at?

Howdice Brown: I think the other one I was going to look at had a lot going on in it, too, and is just intriguing to me. I’m not exactly sure what’s all going on with this one, but I think it’s number 58.

Howdice Brown: Yeah. It looks like it’s got the same built structure back as the other piece.

Melissa Shaginoff: Yeah, and it looks like some food is wrapped up. 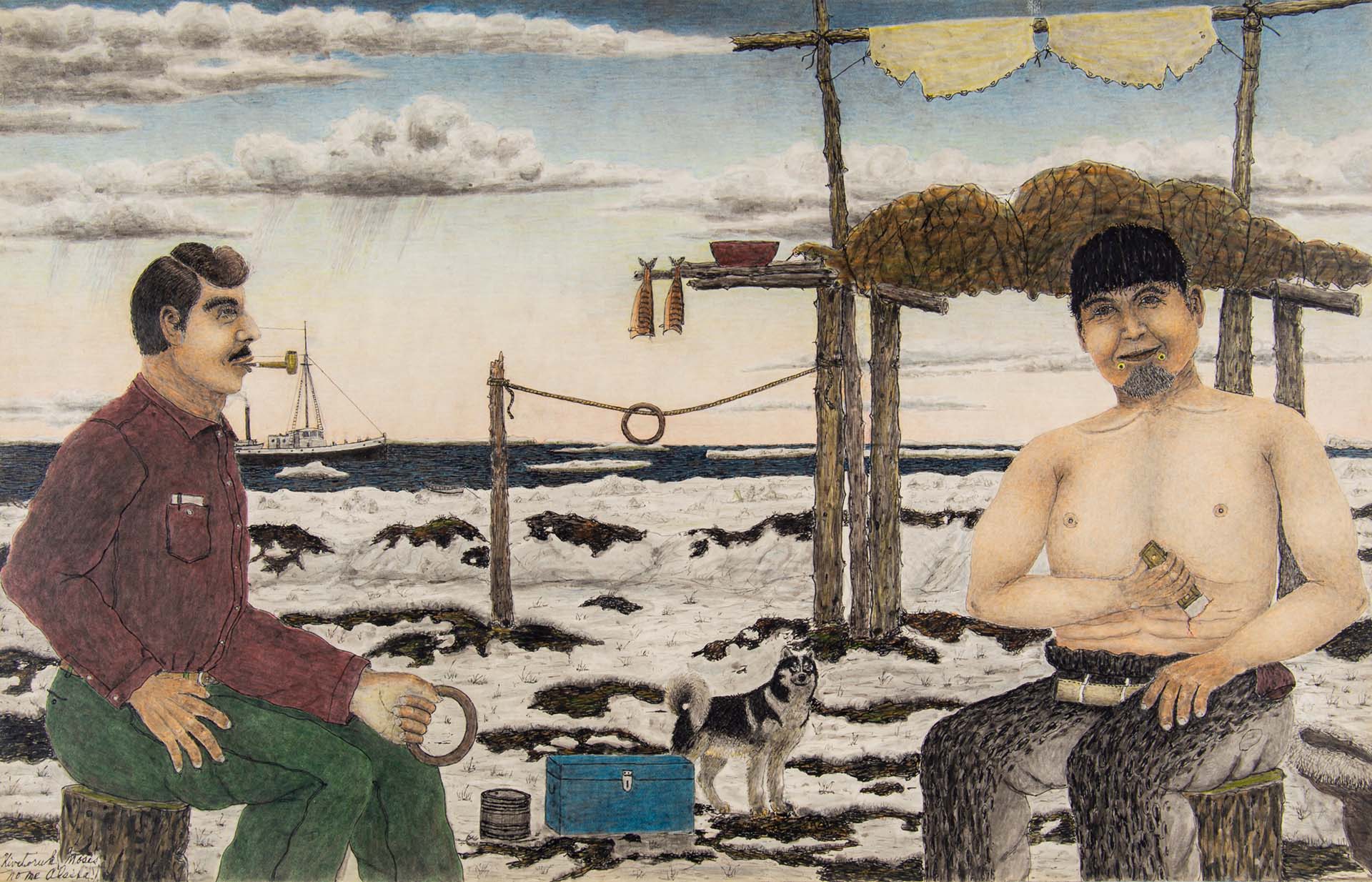 Melissa Shaginoff: Well, and it looks like you have hides that are maybe being winter bleached up here, because you see they still have their stretch hooks. Then whatever this is, is being wrapped up. It might not be meat, but would be lifted up like that so other animals couldn’t get to it, I would think.

Howdice Brown: Even the fish hanging is relatively high and separate. It looks like this person is cutting themself.

Melissa Shaginoff: Yeah. I am not sure what is exactly going on. But it seems like maybe some sort of game or proving of one’s toughness. I’ll keep asking people what they think/know about this scene. Then there are these rings, which I don’t know what these rings are.

Howdice Brown: I just really appreciated the depth on this one. There is a lot of detail, and the depth with the dog, then a depth to the structure, a depth to the coast, the ice, the boat, and then past the boat. There are a lot of things going on, on each layer of this. That was something I noticed on quite a few of these paintings. It makes me just curious too, because I wasn’t familiar with what was going on with the knife. It looks like this person has some of those traditional piercings on the bottom sides of their mouth. Holly has been asking me to get those tattooed.

Howdice Brown: I have so many questions and there are so many layers to this story going in each piece and layers to what is being revealed. The story that’s happening and playing out, even just how the person on the right is a little bit more open too. We would call that open to camera in terms of blocking. You could have them just facing each other, but it is pretty inclusive because of that positioning, the blocking of the man in the seal pants.

I’m just having a lot of fun looking at some of those smaller details of…I don’t know. I can hear someone talking about a story in the way this is painted, “This was happening, but it was this kind of day…” There is also all these other little details included in the scene. But to understand it comes with a certain level of experience and context. I don’t tell stories necessarily like that, but I can recognize its importance when I hear it. I’m just really impressed with every little aspect. I like the rope coming off of the structure back there, the wooden structure. I like how there are two strands coming off on this place. It just feels really tactile or tangible or whatever you want to call it like it wasn’t just put there it was tied, really thoughtful.

I recognize the ship too as a personal note. I’ve got some photos that I’ve collected where that boat looks fairly similar to a photo that I have of somebody. I don’t think I ever got the name of who it was, but it was somebody traveling to Elim. It was kind of a similar boat. I took a photo on the front of it.