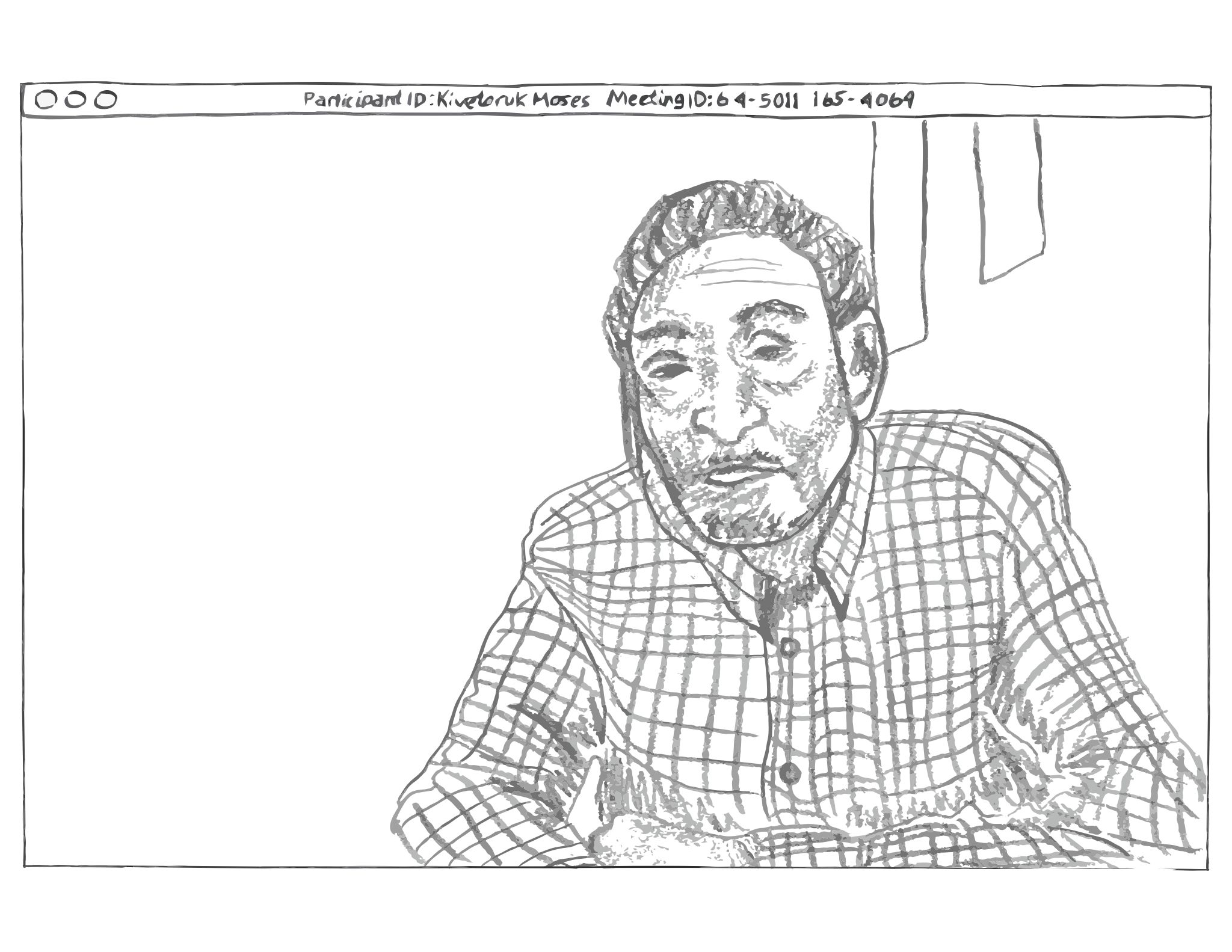 Joseph Senungetuk is an Inupiaq artist born in Wales, Alaska. He attended the local school in Wales until the age of ten, then moved to Nome with his parents and two older brothers. Joseph attended the University of Alaska Fairbanks for two years before going to teach art at Mt. Edgecumbe High School in Sitka. Later, he attended the San Francisco Art Institute. He then worked for the Indian Historian Press and then published a book written by Joseph in 1971 titled Give or Take a Century: An Eskimo Chronicle which details his life as he lived it in Wales and Nome, Alaska. Joseph is an Elder in residence at Alaska Pacific University for the university’s art program and works alongside his wife Martha. 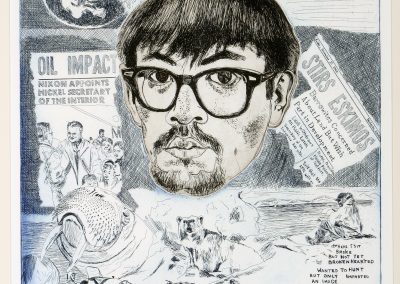 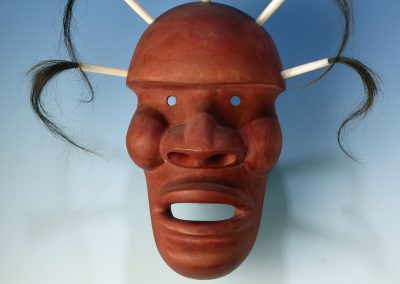 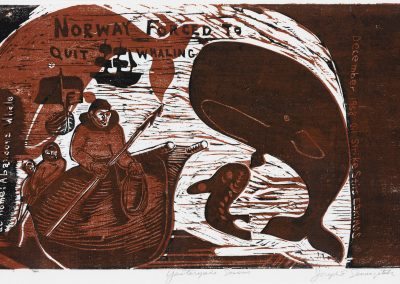 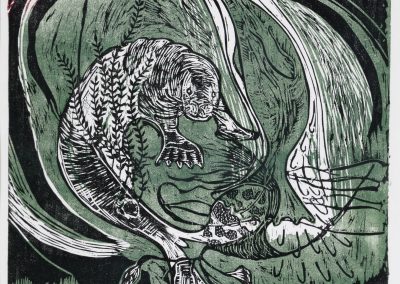 In the mid-century the Arctic landscape was largely unknown to the western audience. An Inupiaq way of life in Nome would, to many, be unimaginable. But as Indigenous people lived and thrived in this environment, Kivetoruk created paintings of life that were as full of Indigenous strength, brilliance, and story. Kivetoruk was, in a sense, a storyteller. The stories he told expressed both his personal memories as a hunter, as well as the fantastic stories of a very real Arctic place.

Kivetoruk’s work represents a nuanced sense of pride to his Indigenous viewers. His work depicts the deep knowledge and history Inupiat people have of and within the Arctic. His scenes of hunting represent the incredible Inupiat technologies that have and continue to ensure their survival, and the resilience they have as their way of life and landscape changes with colonization, settler-colonialism, and climate change.

In recent years the rapid warming of the Arctic has shifted land drastically. Indigenous people, while resilient, have had to adapt to changes, including the introduction of new animals into their communities. 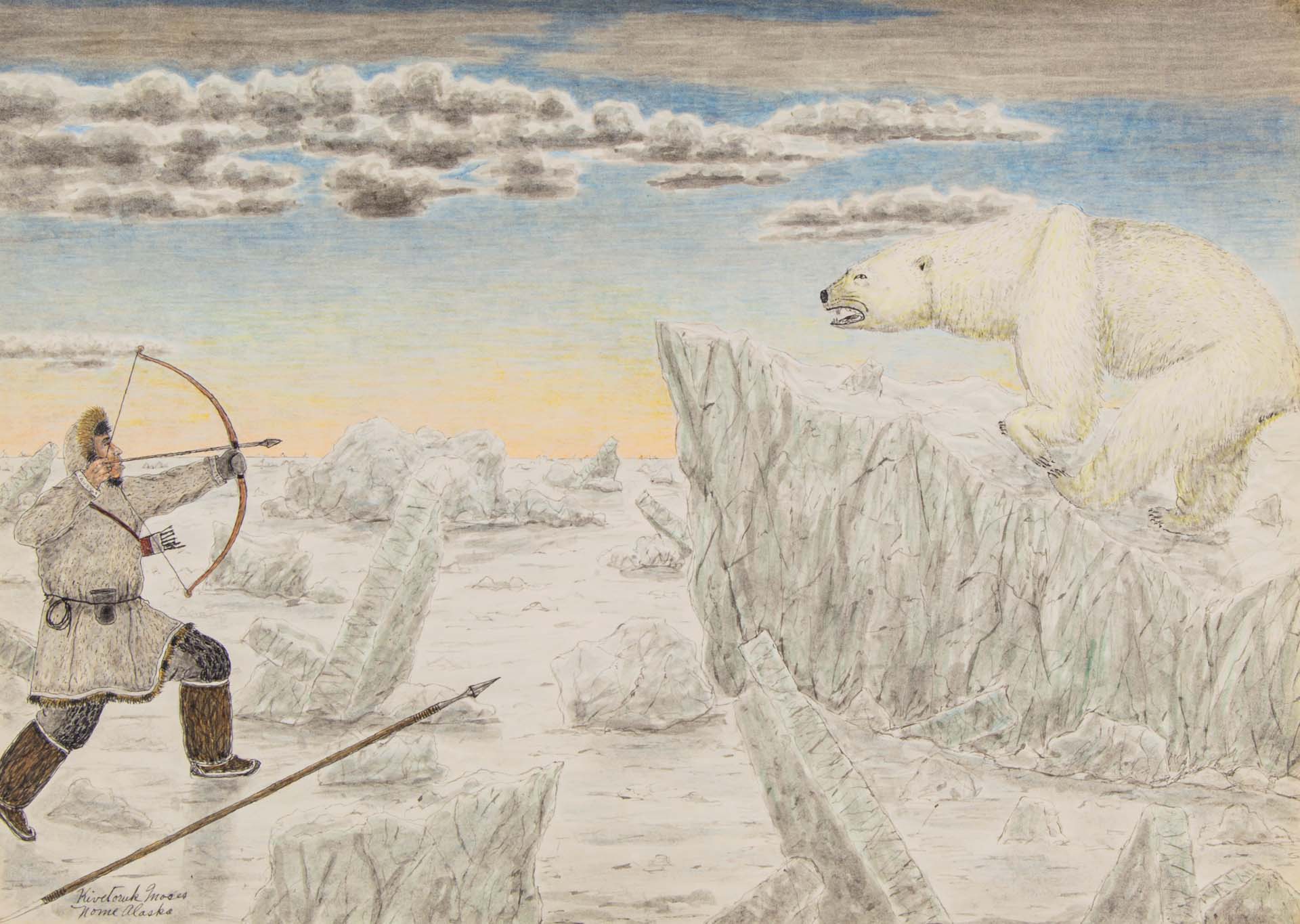 Melissa Shaginoff: Can you tell me about the time you met Kivetoruk?

Joe Senungetuk: I would say I was very gullible to any kind of stories. And when he told his story and he left the house, my Dad turned to me and he said something to the effect of, “Did you ever hear such bullshit in your life?” And the story was that he was carrying only three high-powered bullets or shells for his hunting rifle. And he came across a wolf den, and he moved the snow away from it so that he could take a better look to see what he was facing or what kind of animal was there in that den. He said he counted five wolves, the parents, two adult wolves and three young wolves in that den. And somehow, he never woke them up. And I think that’s part of what my Dad was referring to. This shouldn’t have happened because it becomes just a story, a big fairy tale to my Dad. Because he was experienced as a hunter and subsistence gatherer and so on. Both my parents were like that.

Melissa Shaginoff: Did you grow up hunting with them?

Joe Senungetuk: My older siblings were sent to Mt. Edgecumb boarding school in Sitka to be educated in the western mindset. I stayed with my parents and learned the Inupiat ways of knowing. These memories formed my view of the world. They have sparked my imagination and creative process.

Joe Senungetuk: Back then in Nome, if anything important was happening, the village crier would yell out, she would yell and tell everyone around the village what was happening. My earliest memory is when she was yelling out saying that they shot a moose hide, they shot a moose hide. They just shot a moose not knowing what a moose was. We always heard about either using moose hide in daily work and dress. We knew what she was talking about and yet in my mind I was thinking, well, how could they shoot just a moose hide. It’s already dead. But that was the beginning of the migration of moose up to Wales. 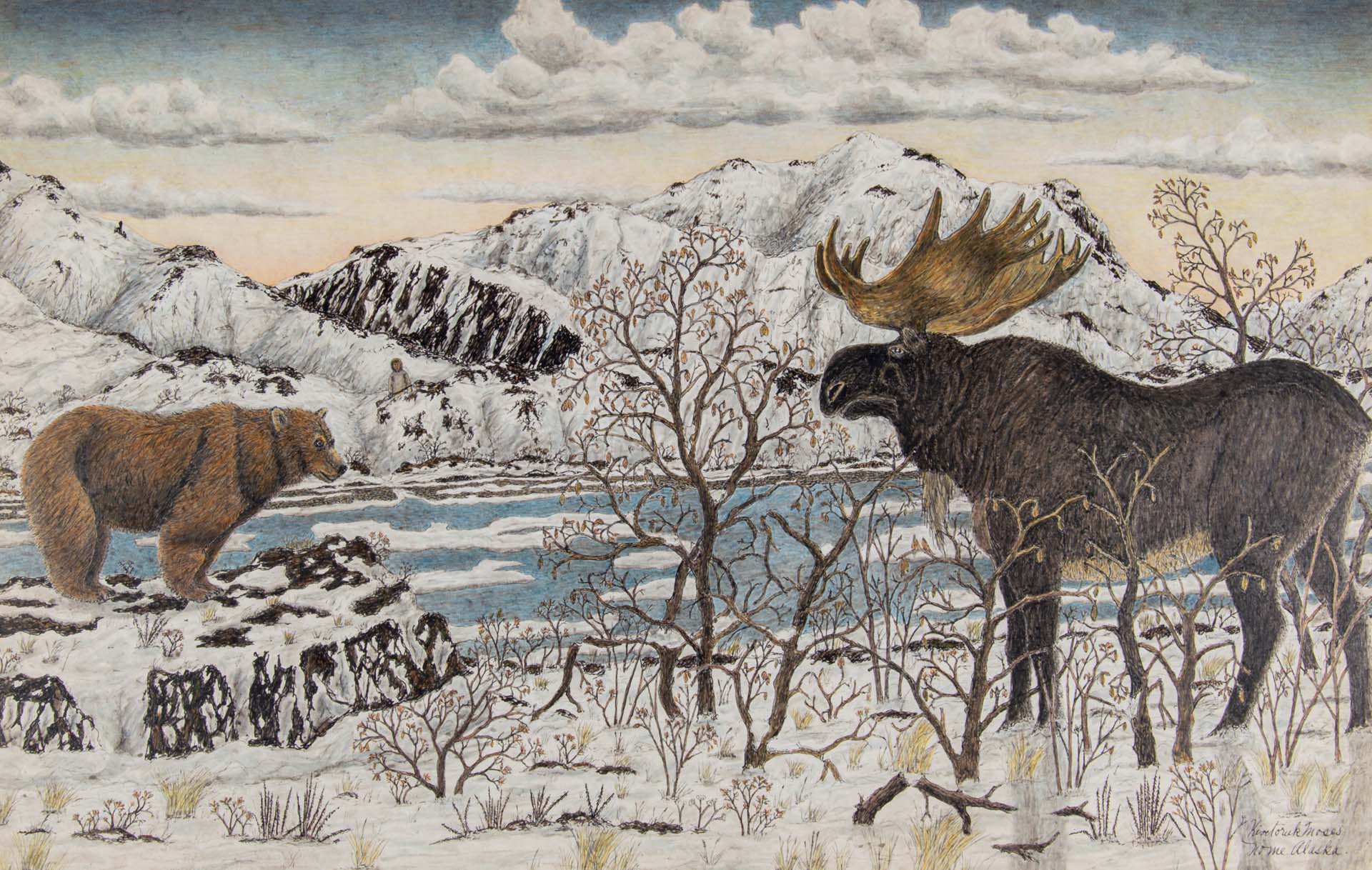 Melissa Shaginoff: Wow, and that was around when you were eight or nine years old?

Joe Senungetuk: Younger, probably about five or six or seven.

When you visit Wales nowadays, we see that indeed there are those little willow trees. We would go up into the hills to pick the leaves off. I remember people talking about putting greens into containers made for holding seal oil and other things mixed together like greens and seal oil; that’s how we preserve the necessary vitamins for our own health. And it’s always been done.

Melissa Shaginoff: And moose are getting at them too. You can see those willows in this scene. That’s a cool story. Tsin’aen.

Joe can you tell me a little bit about this piece?

Joe Senungetuk: Well, those hunting tools, the seal retrieving hook. I’ve seen that used, and the way that they used it was first they let it gather speed by turning it above the head and knowing when to stop it spinning and actually letting the centrifugal force carry it to the dead animal floating on the water. It was never a hundred percent accurate or the only way because we then had retrieving little, tiny boats, dories, for hundred percent opportunities to retrieve the floating sea animal. 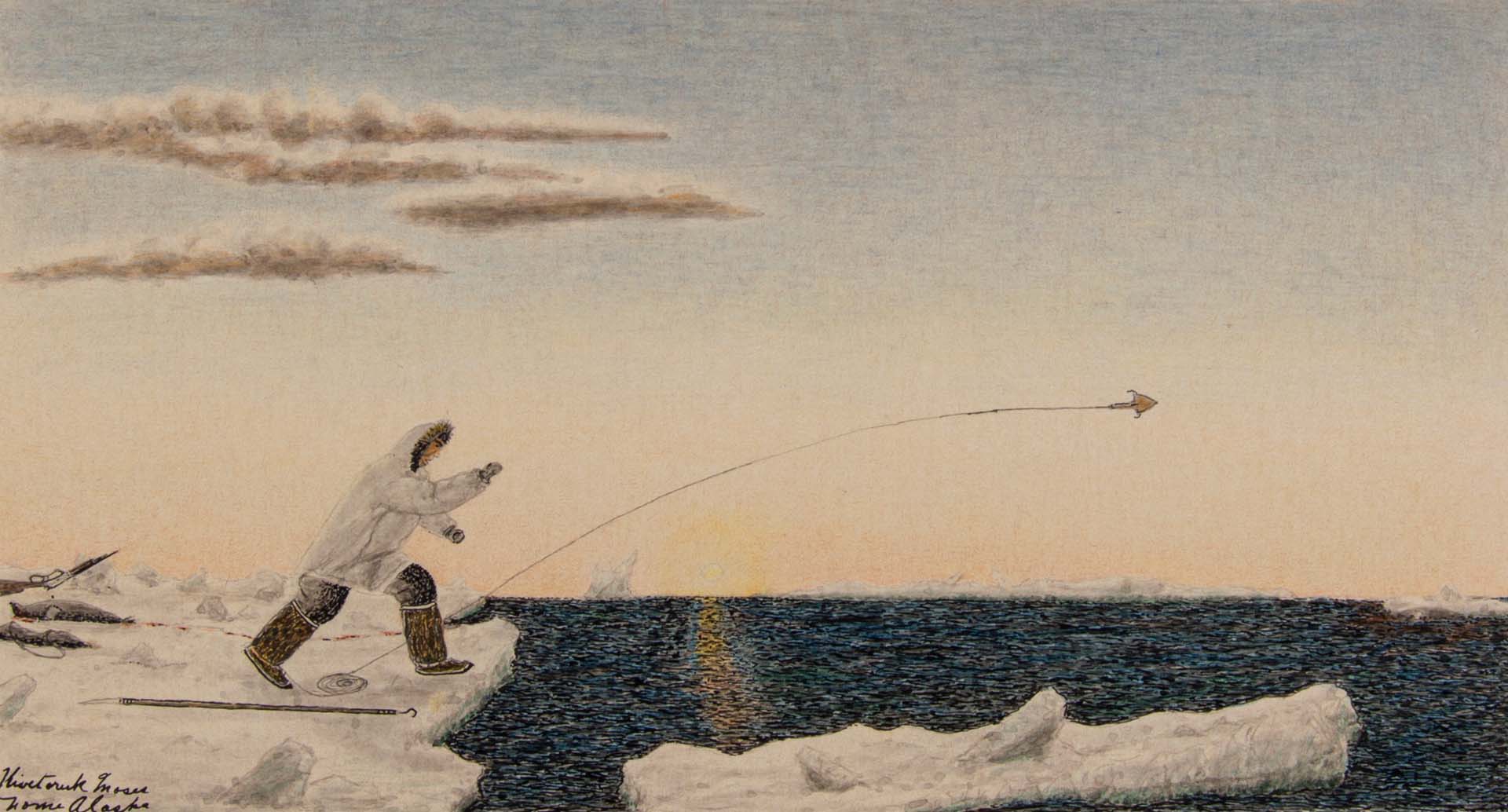 Melissa Shaginoff: Yeah. This image here that I think kind of illustrates the seal retrieving hook.

Joe Senungetuk: And that’s a small seal. There are many different seals and that big one would actually get to be an adult size of around twelve feet, the bearded seal.

Melissa Shaginoff: That’s wild. So you have the seal retrieving hook and the seal poke, right?

Joe Senungetuk: Yes. That is a poke right there, so they would check the ice with these too, but then would it also be to help to pull the seal up onto shore. Later on, I learned that the line is also very important when either throwing the harpoon or the retrieving hook. There’s a leader line that is thinner than the rest of the line so that you could throw it farther but not let it get so thin and breakable that it becomes useless. The line was made out of rawhide; the line was very important in its caliber or thickness between the harpoon and the retrieving hook.

When my father took me out seal hunting the last time that he and I had an opportunity to be together and out ice hunting like that, I learned not only is the thickness of the line important, but every aspect of knot-tying is very important. Every part of the ice hunter’s day out there is important. I had a telescope mounted on a rifle that I was using. He admired me for being so careful in zeroing in that telescope part. And when I did get the seal, I pointed to the little dory that we were using as a retrieving thing. For times like that I was impatient to go ahead and get on that little dory to go and get the floating seal, which was still quite a ways away. My Dad looked in the wind direction and way out the little ice chunks were moving. He was quite expert in reading the ice conditions out on there… He could read it. He could read everything out there on the ice edge. When I made motions that I was ready to go and get on the little dory to retrieve that seal he said, “Just wait a while.” That’s what he said. And half an hour went by and where that seal had been it was suddenly crushed by the wind and the current acting together to push many of the ice chunks that were floating around so that they became like barriers and they made my poor dead seal disappear… I would’ve disappeared if I were out there.