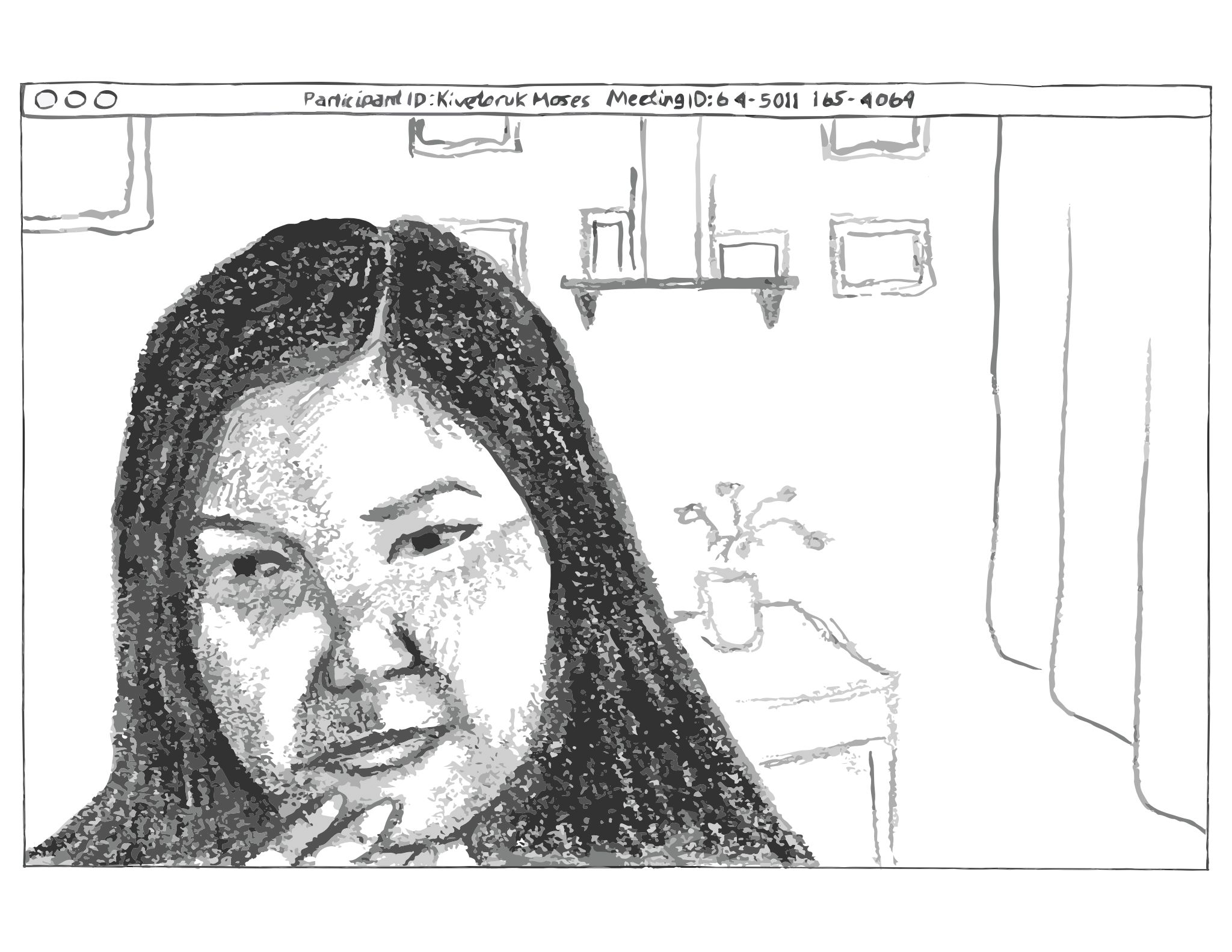 Kathleen Bonnar is Iñupiaq from Nome, Alaska, with ties to the surrounding villages of Brevig Mission and Shishmaref. Kathleen grew up closely tied to a subsistence lifestyle and traditional values. In spite of this, Kathleen felt disconnected from her Iñupiaq heritage. This was especially true when she relocated to California with her family as a teenager. As an adult, Kathleen returned to Alaska to reconnect with her culture and the lifestyle she grew up with. 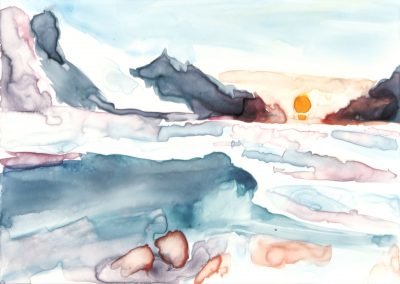 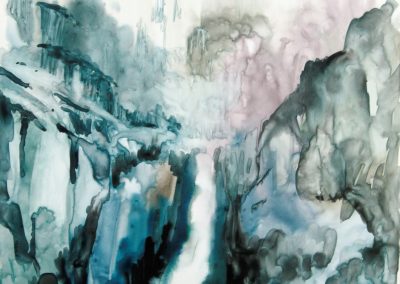 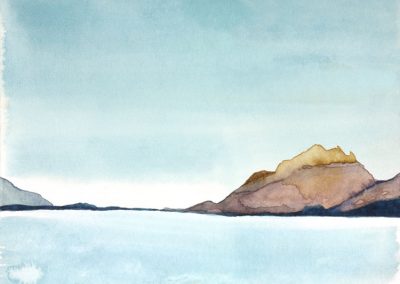 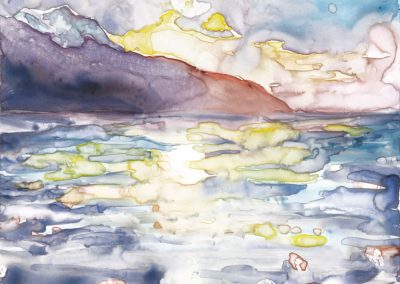 Melissa Shaginoff: Can you tell me about this scene?

Kathleen Bonnar: This particular image reminds me a lot of my grandmother. She practiced subsistence lifestyle pretty extensively and was the primary person in our family that passed on that knowledge. I also think about my grandmother’s fish camp, where my grandmother had a cabin, but she also had these kind of semi-permanent tents there for extended family members to stay in. I think, when I was much younger and this camp was very busy, we might have had at least two or three of those tents and there might have been at least maybe thirty people at camp. 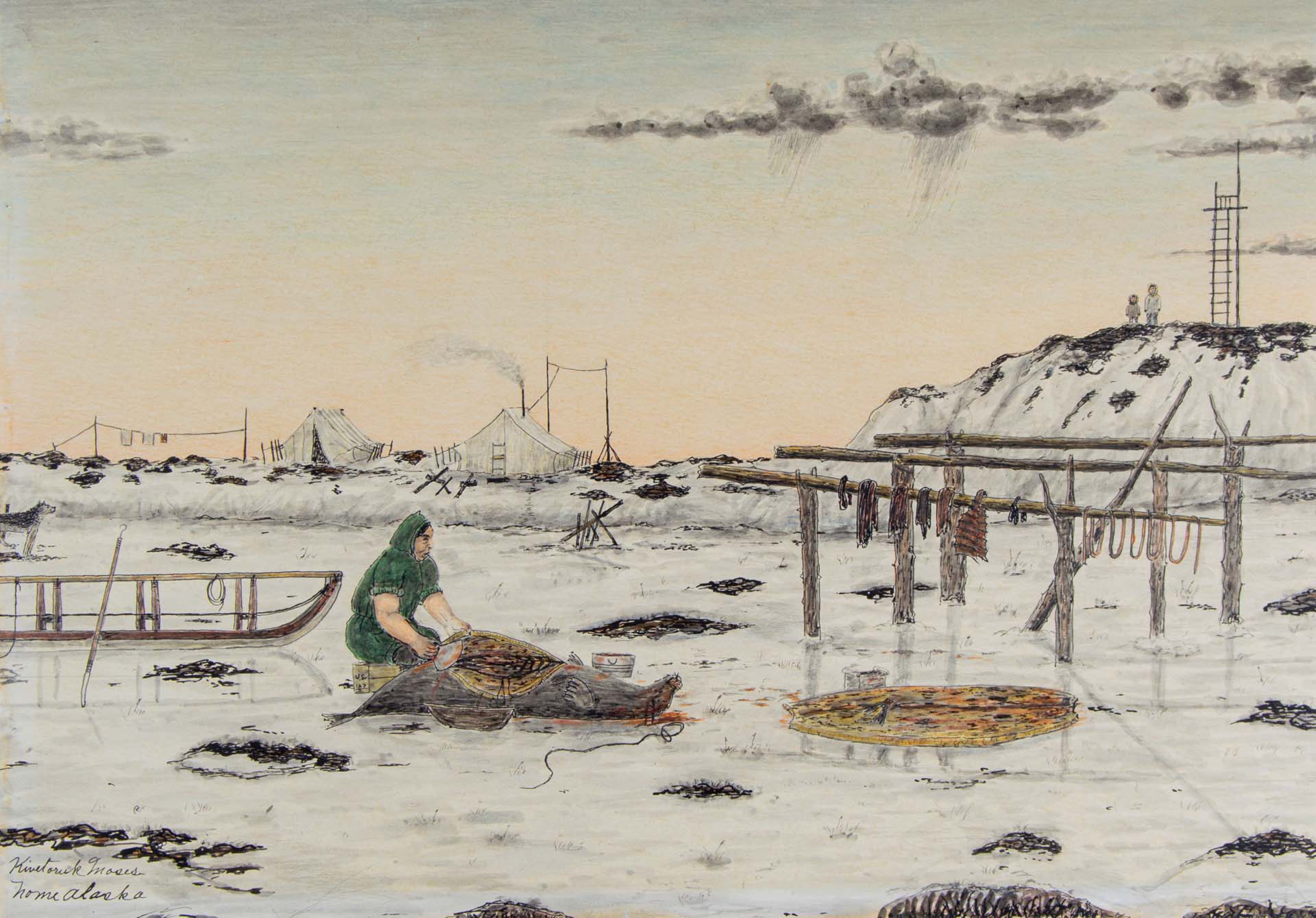 Melissa Shaginoff: Kivetoruk seemed to represent many different subsistence activities in this painting. Can you speak to your experience at fish camp?

Kathleen Bonnar: [Fish camp] was primarily for fishing, but I know my uncles and cousins would have gone seal hunting, and my mom, too, would join them. And they used to have dogs posted outside just like that. I know that my grandfather, who died before I was born, he used to have a dog sled team. And that was his primary mode of transportation.

I can see that the person skinning the seal is using an Ulu, which is still something we use a lot today. That’s a traditional women’s knife. And that’s like something that I used to learn how to skin fish growing up. I also recognize this galvanized tub…this drying rack also looks very familiar. The one that we had at camp was much larger though, and [it] had a lot more fish hanging…this woman is wearing mukluks or [we] call them kamik boots.

Melissa Shaginoff: Can you talk about Indigenous subsistence and how it is unique or different from the western definition of subsistence?

Kathleen Bonnar: Yeah. Well, I think the first thing to address is that this isn’t a hobby. Subsistence lifestyle is completely necessary, especially in remote, rural Alaska where access to westernized food is very limited and very costly. So I think that’s the first thing that people tend to misunderstand, that it is necessary in order to have a healthy lifestyle. And [it’s] also very community-oriented, not ego-centered. I think in most Alaskan Native cultures, and definitely in an Inupiat culture, hunters aren’t meant to be prideful, but in fact, quite the opposite. In order to be a successful hunter, it’s considered that you should be humble. And there are many reasons for that. I think this gets a little glorified a little bit, but we talk about how you use everything or as much as we can of the animals that we process. But that is something that we take very seriously like wasting the gift of an animal’s life is like, I guess, to put it in western terms, it’s considered sinful.

Melissa Shaginoff: Here is the picture, you see a person skinning a seal. Can you talk to your knowledge of seal hunting?

Kathleen Bonnar: My mother was a seal hunter. I’m not too sure on the details, but I think that they would go out in, like, a skiff. So, my mom would probably go out with, like, some of my older cousins or some of my uncles. It’s usually a small group that would go out in a skiff. Someone would be driving the boat and then there’d be people with rifles, like, trying to spot seals, which I know is very challenging. To be a seal hunter, that’s held in very high esteem because it’s very challenging. You’re in this boat which is moving, and you’re trying to get this very fast-moving, very intelligent sea mammal, which you usually can only see, like, their little heads popping out of the water. And like I said, they move pretty quickly. So you also kind of have to predict their behavior because you might spot it and then you have to predict where you’ll see it next in order to get an optimal line of sight for a successful shot.

Melissa Shaginoff: It’s pretty impressive when you imagine it.

Kathleen Bonnar: Yeah. The other thing is you have to be a very accurate shot because if you’re not, then you might deflate the lungs of the seal. And then if you do that, you’ll lose the seal. Also…this is pretty graphic, but they want to, like, shoot their head because it also means that there’s more usable pelt. Much cleaner and more humane shot anyway.