Description: This bowl lacks any information on its origins or maker. When Ted Coe acquired it, he noted: It turned up at the Elkhart Collection, Santa Fe, run by Bob Ashton, who had no idea of its tribal origin.

But fortunately, objects are the key place where social actions and information is encoded. In this bowl, the weaver has incorporated her personal and cultural history into this basket. We only need to find the right tools to read, understand and contextualize the basket to learn more about it. In the following, I will take you through a few steps in creating a pathway to creating a proper provenance attribution of this basket. Here are a few of the more noticeable features that help us understand when this bowl might have been made. Admittedly, I am not providing all of the background information or steps here. For brevity, I am taking you through these steps quickly.

Baskets from Sonoma County are rare and account for no more than one-tenth of one percent of all California Indigenous baskets in public and private collections.

Using documented baskets can help us identify and date this basket. The comments that follow are based on baskets in European, Russian, and American collections that include baskets collected in what is today’s Sonoma County during the nineteenth century. By studying these baskets and their collection dates, we can attribute a date of circa 1860 to this bowl and that it is from Sonoma County.

Attached to the bowl are porcelain beads, manufactured in either the United States or Europe, a type of bead that entered northern California between 1800-1820 and was continuously traded with Indigenous people through 1880. The shape and use of porcelain beads to create the design or pattern on the basket’s surface by weavers in the south of Sonoma County are distinctive when compared to Ohlone weavers’ work. The Ohlone principally used Olivella shell beads to create, in comparison, thick patterning. The use of redbud indicates this bowl was made north of the San Francisco Bay rather than south of it.

The basket is from long ago, made during a period of genocidal misery for California’s Indigenous peoples. A good part of the reason this bowl is hard to identify is because of the devastating effects of Spanish, Mexican, and American colonization. By the 1860s, when this basket was made, the remnants of once great populations banded together, often on a White rancher or farmer’s land as a form of indentured slavery. Introduced diseases ravaged whole villages; others were forcibly taken to Spanish and Mexican Catholic missions as neophytes to be converted and used as labor to build and maintain the mission buildings and tend to the crops and herds. American dominance was first through atrocities by the military and settlers and later the wholesale taking of lands. Some Indigenous tribes were destroyed, others survived.

Surviving often meant finding other survivors, sometimes people who were your tribe’s traditional enemies and other times foreigners. Banding together, however, might be the only route for survival. Within these ugly circumstances people continued to practice their cultures. One means to continuing agency was through practicing basket arts. This was enormously challenging; non-Native land ownership made the harvesting of basket materials increasingly difficult while marshes and lands that once were resplendent with basket making plants were now drained, farmed, or trampled over by cows. US Government assimilationist policies and boarding schools made the weaving and teaching of baskets more perilous. The death of older generations lost from disease and colonization meant a great wealth of cultural memory also was lost.

Consider what this weaver might have endured while making this basket. She was heroic in continuing to make baskets in the face of colonialist aggression. Nonetheless, she asserted her Indigenous agency over her circumstances by creating a wholly Indigenous item and incorporating beads into it. Her incorporation of the beads makes them hers, an Indigenous testimony of strength, emphatically telling the world a story of survival and persistence. This basket is a marvel is it not? 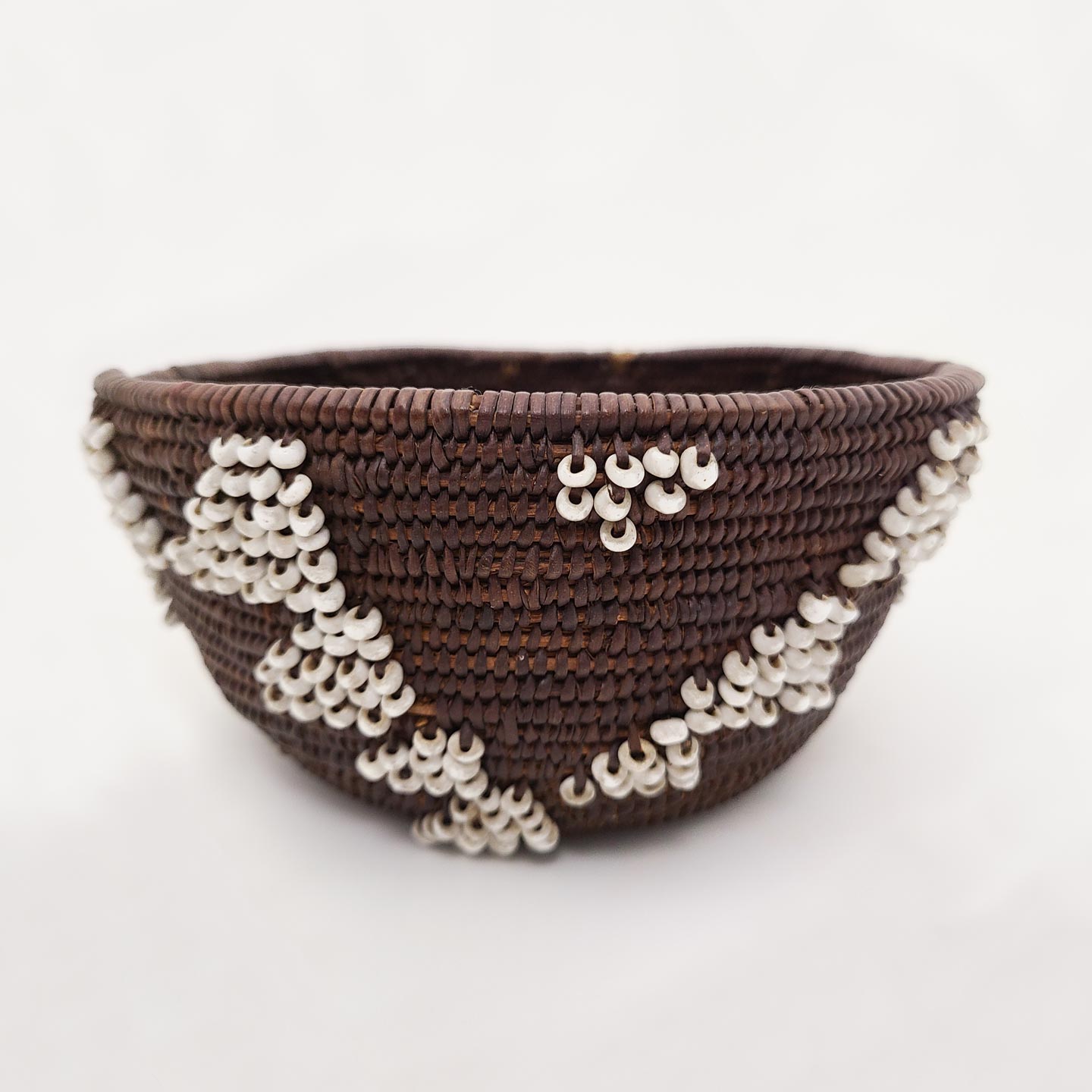