Sometimes there is a need to go into the agrestal wilderness, especially during these fall months. A yearning emerges to venture just outside the home and bring back findings of the earth: berries, mushrooms, seeds, leaves, fruits, and nuts. What might one find? Where were these delicious treats found? Where were these findings brought? Who would taste and enjoy these delicious finds?

Harvesting and gathering required the element of a vital repository: a burden basket. For generations, burden baskets were made in many Native American societies to carry goods and items such as food, personal items, and wood. The harvesting season began around November. Families would collect and store what was harvested in their family plots using such baskets.

In the 1800s, members of the Eastern Band of Cherokee purchased 57,000 acres of property. Today, this land encompasses the pristine mountains, rivers, and forests of the Qualla Boundary which is under federal protective trust and not part of their reservation. Currently, there are about 8,000 members of the tribe who live, work, and raise their families in the Blue Ridge mountains of North Carolina.

Traditionally, the Eastern Band of Cherokee were hunters and gatherers. Using utilitarian baskets was vital for their society to survive and generate community and a sense of well-being. As in many traditional ways of life in Native America, knowledge was held and exchanged among artisans, farmers, hunters, traders, and community builders. Their families are gathered and unified by seven matriarchal clans, who have guided the tribe for multiple generations. These matriarchal clans transfer the knowledge of how to make baskets.

Most artisans have learned basket-making from their mothers, aunts, and grandmothers. However, this basket by artist Agnes Welch is different. In the beginning, while at school, she learned from Cherokee basket artist Lottie Queen Stamper (1907-1987) who was a master artist in traditional Cherokee basket weaving. Agnes became the first in her family to learn basket weaving. In time, she learned how to weave traditional rivercane baskets. She became well acquainted with these skills. It was only later that she learned from her mother-in-law how to make white oak baskets such as this one. Once she specialized in white oak baskets, she became renowned for her basket-making work. When Agnes learned how to make baskets out of white oak, she resumed the matriarchal custom of teaching her daughter-in-law, Carol Welch, who is now one of the most accomplished Cherokee basket weavers. 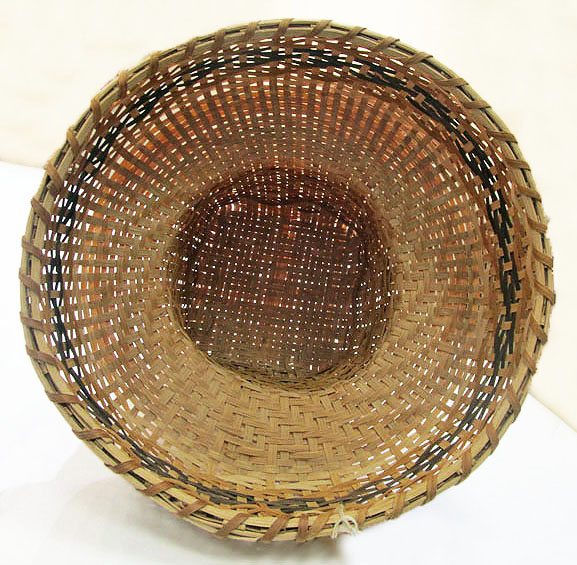 Agnes lived on the Galamore Branch in the western North Carolina mountains. Basket weaving was a way of life for building economic sustainability. To construct her house and feed her family of twelve children, she proudly sold the baskets she made.

This particular burden basket is uniquely shaped. It has a narrow, boxy cylinder bottom and a flat, round, bowl-like top. The 9.5 by 11 inch basket looks like a funnel to separate smaller items from larger ones. This would make sense when storing or carrying smaller fruits like blueberries and blackberries and nuts like pecans, butternuts, and black walnuts separated from larger, heavier, wild onions and apples. The two elegantly built structures of this caramel-colored basket incorporate different designs: the bottom, a diamond pattern, and the top, a simple braided ring with a dyed, dark maroon banner in the middle.  According to Agnes, “the old Cherokee baskets of white oak were hardly ever dyed. They were just woven and left in their natural color to season and age…[Today,] I use natural dyes. Mostly bloodroot and walnut root. Bloodroot makes a yellowish red and the walnut root a dark brown. I put both colors into my baskets.”

Cherokee ancestral lands are like honey with a vast abundance of resources as far as the eye can see. Along the rivers and streams, villagers planted gardens and cornfields that surrounded their homes. Corn, beans, and squash–the staple diet of the Cherokee–were famously known as the “the sisters”. In addition, they would also eat sunflower seeds, pumpkins, and other crops. Eventually, they incorporated other foods from different countries into their diets such as peaches, watermelons, and apples from Europe, black-eyed peas from Africa, and sweet potatoes from the Caribbean. 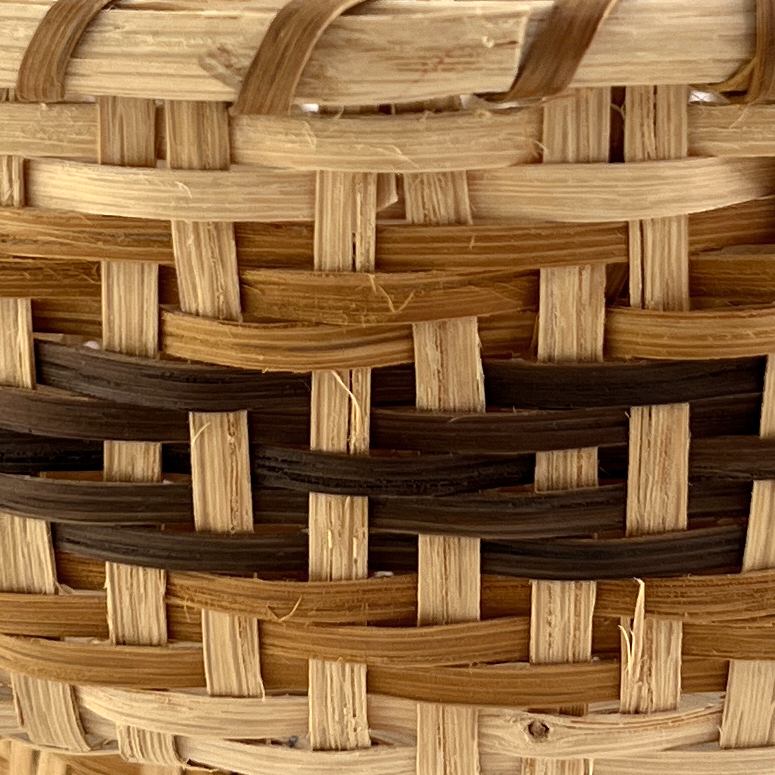 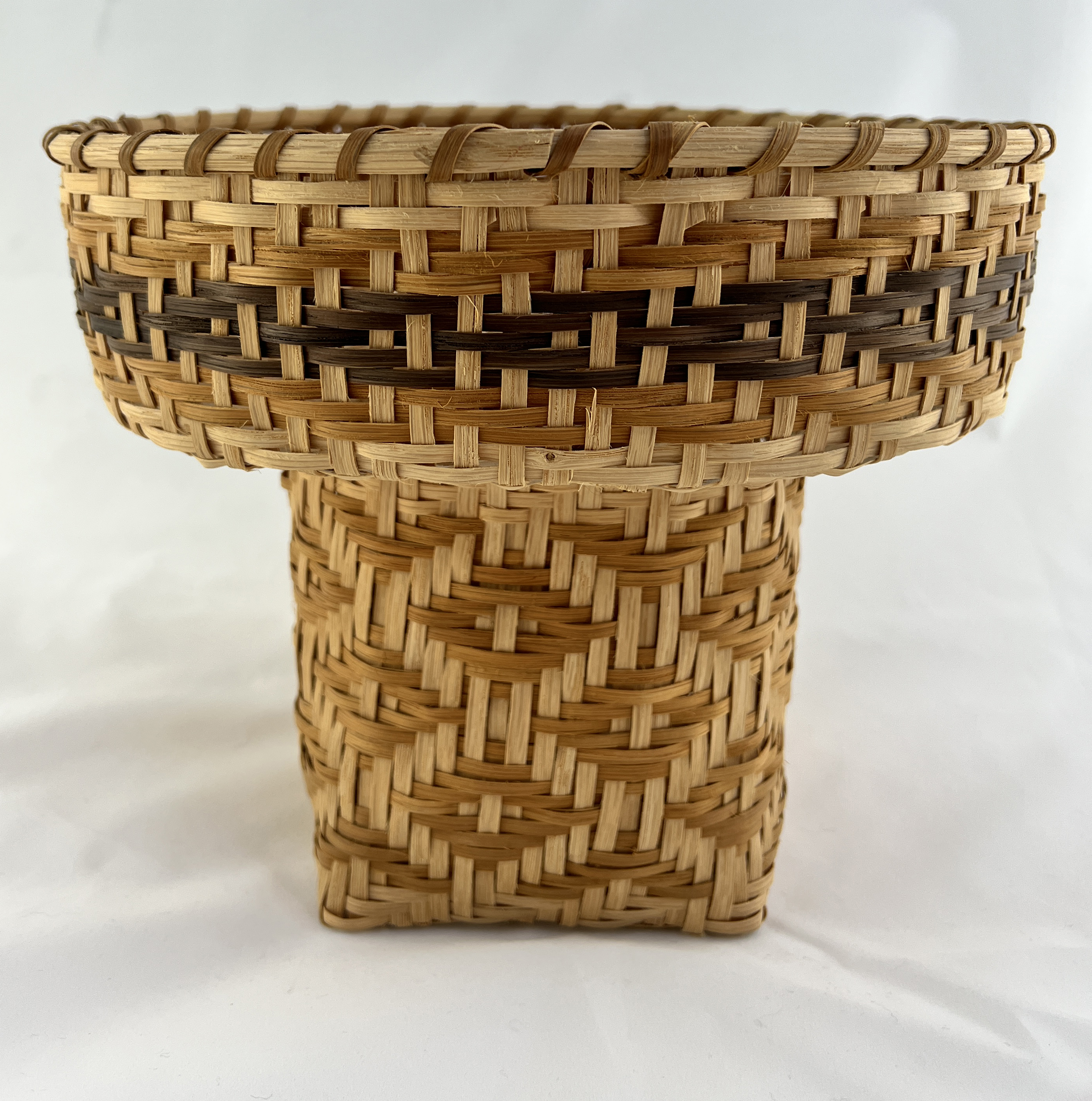