Description: In the last February The Virtual Coe newsletter, we mentioned the importance of the Wixárika (Huichol) shaman and the messages they convoke in healing ceremonies. It is not surprising then that the origin or story of this Huichol tecomate Calabash Container pictured here, a gift from Edward J. Guarino, remains unknown. This mysteriously functioning entity’s story may only be known to the Huichol shaman and how this container/gourd has been used for healing in their Sierra Madre Occidental homelands.

At first glance, one may come across this object and assume it is a child’s toy with its brown tan sheen and juvenile emblem of the painted sun, two eyes and no mouth (maybe due to paint wear flaking off). The container might be thought to be a repository of some sort for child’s play; perhaps for seeds, sand, or pebbles. A small opening at the top is shut tight using a perfectly fit wooden cork seal with blue and pink yarn linking the pieces together. 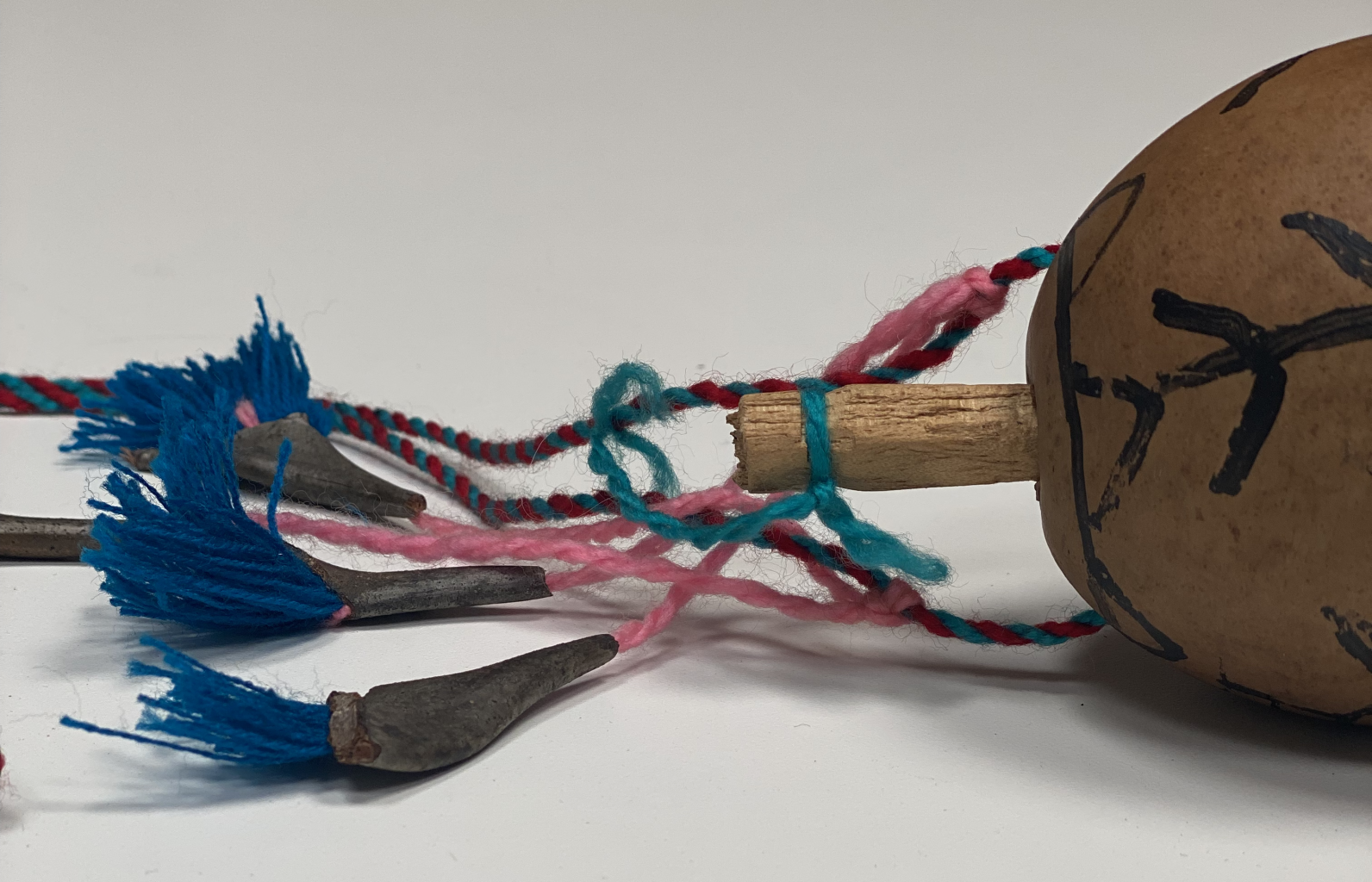 When we lay eyes on its decorative attached ornaments a little longer, the otherwise childish playful concept may shift to the maker’s more solemn, perhaps even magical intent. The gourd is wearable, possibly around the neck or shoulder with a tightly interlaced blue and red yarn. But this is not the only detail that captures one’s interest. Tied to it are interlaced what simply appear to be four shark teeth although in reality they are likely seed pods whose bases are decorated with midnight blue long pompon-like puffs. Having said that, it is not uncommon to see shark in Huichol bead art, paintings, and ceramics.

Let us open the story to the eye of the beholder: you. There could be two explanations for this artifact. The first is when looking at the wooden cork seal, it could be a specific musical instrument for making a rattle noise. The closure piece indeed appears to be broken off, as if there were a long handle at one point in the object´s lifetime. Sure enough, there are similar Huichol rattle gourds or kaitsa in other collections at the Museo Zacatecano, Zacatecas, Mexico as well as the National Museum of the American Indian. In traditional Huichol ceremonies, the shaman is singing while beating his drum, while children sit in a circle around him, each holding their kaitsa and beating in rhythm with the shaman. The kaitsa is used by children at such ceremonies with the intention of guiding the spirits to their sacred origins. In these gatherings, songs and music usually take place.

Shamans lead rituals and religious ceremonies based on songs to practice their spirituality. In The Shamanic Wisdom of the Huichol: Medicine Teachings for Modern Times by Tom Pinkson, everything is a vibration of energy. The Huichol call this energy a “song”, to which every being, object, entity, and lifeform have their own state of vibration or song. (Pinkson, 2010) It is when the song is sung that a shaman is able to enter into the being’s portal to explore their ailments, strengths, and weaknesses and determine ways to convoke healing and keep out harm. These songs are called icaros, “which the shaman uses as a surgeon uses a scalpel.”

Traditional Huichol songs usually incorporate the xaweri (violin), guitar, tepo (drum), and the kaitsa (rattle). The rattles are typically made out of the calabash gourd. The music, particularly during ceremonies, lasts a long time and covers the beckoning of ancestral spirits and deities to accompany the shaman during the ritual. After some time, due to its pentatonic rhythm, the song may seem repetitive and at times vertiginous, but it is precisely this effect that places one into a different state of meditation and in symphony with the universe.

That said, the second explanation is that this particular object could have served as a canteen or guaje. The tecomate fruit comes from the calabash tree. Crescentia cujete is native to Africa, Central America, South America, the Caribbean, and southern Florida. In most of these regions, the fruit has been used for thousands of years to carve utensils, cups, and bowls for household items. In Mexico, a similar jícara fruit is known to be used to carry water. In Mexico, the word jicara, a nahuatlism, is used as a recipient. A long time ago, the jicara was used to measure units, for instance, in prehispanic-made jicaras, gold dust, or pigments jointly with the numbers that designated the amount to be offered to the emperor. This measurement scheme was used until colonial times. 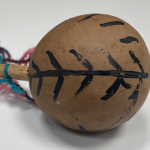 Whether it was a rattle or a canteen—to make either one requires a process that involves the fruit, water, and the sun. The fruit has a hard shell and is grown on a vine which is then harvested to be eaten for medicinal purposes or made into a utensil, bowl, or instrument. For the latter, the fruit is boiled and opened. The fruit pulp is scraped out making sure the seeds are removed. It is then dried in the sun. Once dried, a hole is created in the fruit, where desired. For rattles, a wooden stick is passed through a hole on top and bottom. The rattle noise is usually made by tiny pebbles inserted before closing both holes with a stick. On the other hand, a canteen only requires one whole and a cork. In both cases, no water or pebbles fall or pass through as the stick creates a plug ensuring closure. Once the item is made, it can be decorated by the maker or user. In this particular item, at the top there is one larger hole with a stick tightly inserted and two small holes for the yarn strap. It creates a delicate rattle noise when shaken. One could assume by the looks of the playful sun a young girl or boy may have decorated it. 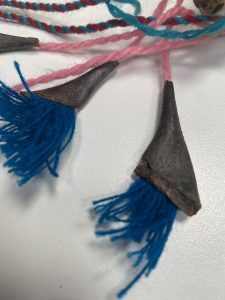 When it comes to healing, Huichol shamans pay particularly close attention to symbols as a way to convoke spirits and energies. According to the Huichol people, the symbolism of the sun, as pictured here, stands for father Tayaupa, guaranteeing healthy agriculture and abundance in nutrition and water.

Now that you have taken a closer look and learned about the calabash fruit and its uses amongst the Huichol, what do you think it was? Was it a musical instrument for child’s play or healing(?), or a utilitarian object for carrying water across the Sierra Madre? 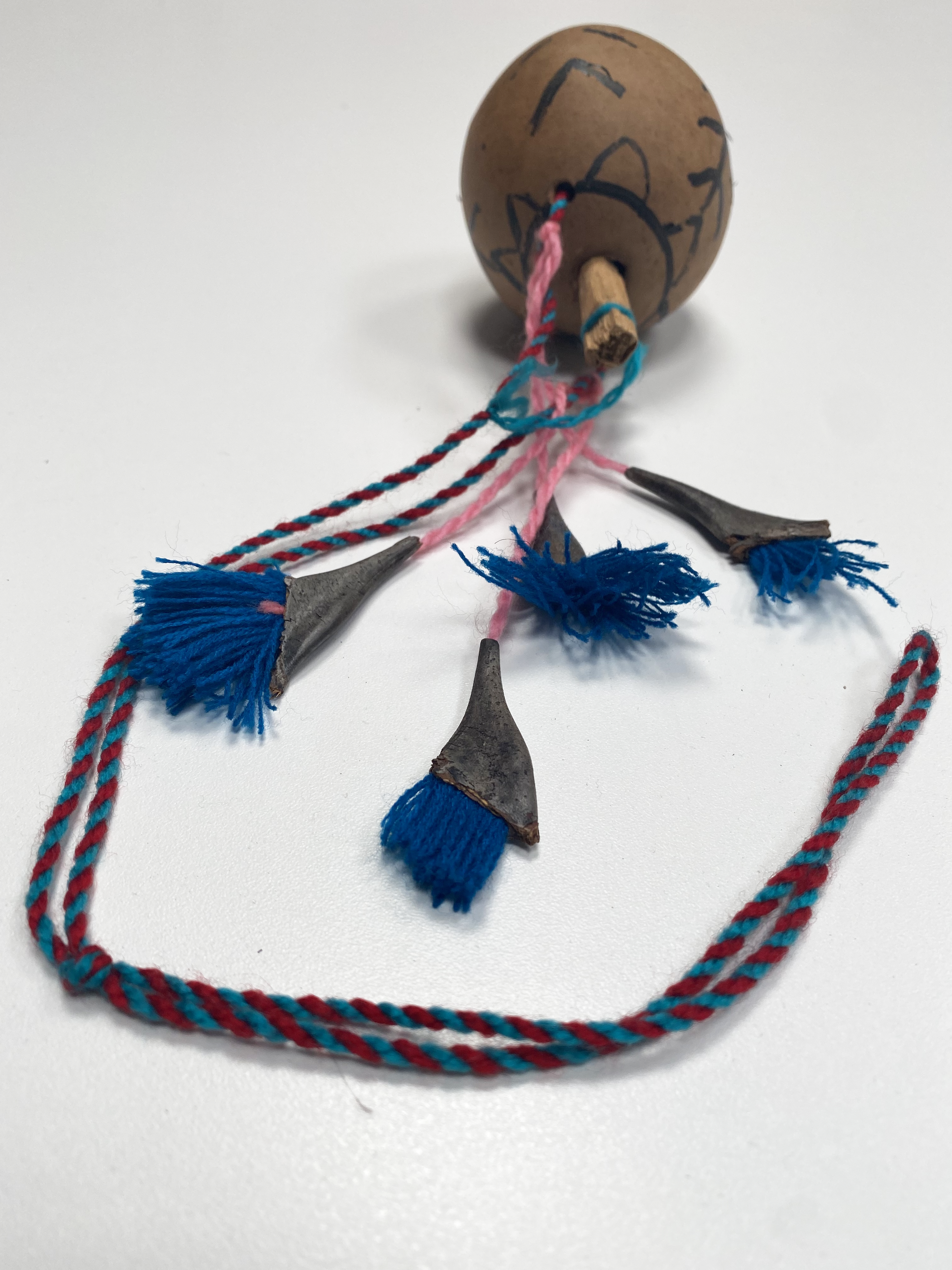