Description: When a baby was born, friends of the family would do beadwork for the baby like baby boots, slippers, hats, and mittens. Beaded baby straps were made mostly by the grandmothers. It was like saying, ‘Welcome to our culture,’ to give a baby beadwork.   —Dixie Alexander, “Skins, Trees, Quills, and Beads: The Work of Nine Athapascans,” 1984 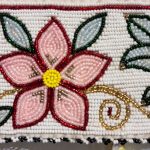 This fully beaded Gwich’in type of baby strap or carrying belt was made in the late 1980s. Devices for carrying babies are known worldwide. While there are a wide variety of forms, as parents, we strive for ergonomic comfort. Carrying our child frees up our hands so we can take care of other business and know our baby is safe and close-by. For the child, it means a privileged perch from which to observe and learn from their surroundings.

In arts centers like the Coe, exhibiting beadwork can be complicated in the sense that articles are most often made to be worn, the curvature and moving of the body or horse altering the aesthetics of the piece. Like most exhibition facilities, we tend to hang pieces on the walls. Baby belts are no different. They take on the character from mother and child as they are worn and used. But once the child is too big to carry, preferring their own mobility—displaying the belt on the wall as a childhood keepsake is the next use of the belt.

The Gwich’in live in their traditional homelands throughout the Canadian Northwest and Yukon Territories of Canada and in northern Alaska. Nonetheless, they fight to protect their Indigenous lands against environmental degradation from oil and mineral extraction and global warming. Caribou are central to Gwich’in lives and existence, “We are the caribou people. Caribou are not just what we eat; they are who we are…Caribou are our life. Without caribou, we wouldn’t exist.”(1)

Ted purchased this strap directly from its maker. Unfortunately, Ted rarely, if ever, traveled with a camera. But fortunately, we have his word pictures of events and how they unfolded in his presence. His story of the baby belt is well-worth quoting at length here. It provides insights into the Gwichyaa Gwich’in, community as well as Ted’s collecting methodology. And his unflinching persistence as a collector.

Ted bought this strap directly from its maker while on a visit to Gwich’in territory. His story about this experience perfectly captures how and why he loved to collect works from artists themselves. He explains, I was told the best way to meet traditional artists was to wait the next morning for the senior citizen’s luncheon program bus to come by, to get on, and to have a $.50 lunch. At the appointed hour, I waited out in front of the B&B, and several times I was vouchsafed a glimpse of a small bus meandering in and amongst the trees going from log house to log house. Finally, it pulled up to me, and I got on. The driver asked who I was, and I told him. He then asked where I came from. Upon hearing that I came from New Mexico, he swung around in his seat and said, “This is Ted Coe from New Mexico. He has a very long walk home this afternoon.” 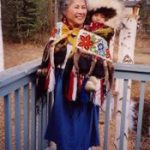 At the senior citizen’s lunch, I met with people who pointed out across from me Margaret John, and said in low tones, “She has a newly completed baby strap—she might sell it to you.” I shyly asked this beautiful elder about it and she said ‘yes,’ she would show it to me after lunch. I think I can say that my visitation to the senior citizen’s center was somewhat of an event. After lunch, we stopped at Margaret John’s home, and not only did I get off at her house, but the whole busload of elders did too and marched into the house probably to defend a fellow elder against a stranger in case I did not prove trustworthy. Mrs. John went into another room and appeared with the baby strap with its elegant tassels and its flowery design against snow-like beads. One elder commented, “well, you’re a bachelor, but you never know….” I forthwith made out a check for $600 and decamped with the belt with best wishes all around.

When I returned to Santa Fe, I received a frantic phone call from Fort Yukon. A daughter, I think it was, explained to me on the phone that her mother could not cash a foreign check at the Alaska Commercial Trading Post, and what was I going to do. My reputation was really on the line and thus that of all strangers from the south. I managed to send the next day by Federal Express, a cashier’s check, to the address given me over the phone, and I assume that all went well because I’ve never heard another word from Fort Yukon.