Description: Clara Neptune Keezer (Passamaquoddy, b. 1930-d. 2016) created this set of doll furniture in the early 1980s. At that point

she had been creating ash splint baskets for over four decades. The Neptune family, rooted in the Passamaquoddy tribal land of Pleasant Point (Sipayik) in Perry, Maine, was known for centuries prior to her birth as leading Wabanaki basket makers. By the time Clara was eight, she had learned the art and significance of basket making from her mother and grandmother. This would lead her down a path of continuance—furthering the practice of ash splint basketry for generations to come.

In the 1950s, when splint baskets were slipping from popularity, Clara Neptune Keezer became deeply involved in the revitalization of the art. She made work and storage baskets but came to be widely recognized for her innovative and delightful fruit and vegetable baskets. In 1993, Clara became one of the 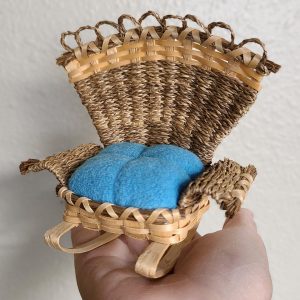 founding members of the Maine Indian Basketmakers Alliance. The work of Clara and the other members was, and continues to be, dedicated to the furtherance of Wabanaki basket making and has led to an expansion of the field—both in terms of new makers and new collectors. It is notable that in the 1990s, when the Maine Indian Basketmakers Alliance was formed, there was only a small handful of (fewer than a dozen) younger basketmakers. However, talk of a resurgence in some ways overshadows the centuries of endurance and connection held within ash basketry.

The Wabanaki were born of the ash tree. First came Glooskap, a bringer of knowledge, and he shot an arrow into the heart of the basket tree, the ash, and when the tree split open from that heart came Man. The Wabanaki first stepped out of the ash tree, and from that moment forward, the ash has remained central to life, creation, and inspiration. The ash tree is particularly suited for basket making; its structure allows for

splints to be pounded apart and pulled off into long strips of fiber pliable enough to be formed into warps and wefts, curlicues and points, but strong enough to hold a day’s harvest on your back. Each splint marks a moment in the life of an individual tree, changing hue and becoming darker the closer they come from the heart.

Pre-contact ash baskets were used for storage, gathering, and fishing. Once Europeans arrived in the Northeast, Wabanaki baskets became popular for use in European homes and for work on fields and wild harvesting. Splints tended to be wider and standardized in form and size. Some were decorated with natural pigments, with splints dyed before weaving or patterns painted on the surface after weaving. Over time fancy baskets, with increasingly elaborate curlicues made from splints of varying widths, came to be widely popular.

Fancy baskets were kept for home use within communities and sold to Victorian collectors. They came in many forms, ranging from sewing baskets, glove and handkerchief holders to wall pockets for holding post 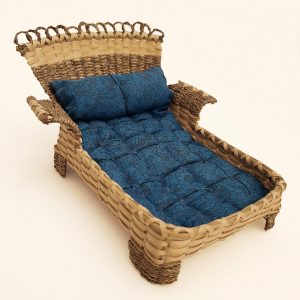 or other domestic items. While functional, these baskets came to be incredibly intricate, with different splint curls passed down within families. Aniline dyes were used to dye splints in brighter colors, allowing for the creation of forms such as berries or corn in brilliant hues.

This particular set of doll furniture is a perfect example of the skill and whimsy of fancy baskets. While the 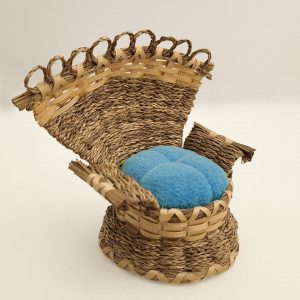 Coe also has a number of other fancy baskets by Clara Neptune Keezer and her sister, Theresa Neptune Gardner, that include various fruits and vegetables—berries, corn, even a pineapple! —these tiny pieces of furniture stand out. They, of course, could be used in a child’s dollhouse, set out as elegant furnishings for little dolls in fancy dresses, but they could just as easily be used as part of a sewing space, holding needles and pins as enticing and amusing pincushions. This connects back to an earlier era of fancy baskets, where form and function reached a peak in the Victorian era. They are a part of the continuing back and forth, that dialogue across time and generations that come through the splints themselves. The delicate ash splints, braids of aromatic sweetgrass, and vibrant blue fabrics connect Clara with past, present, and future Wabanaki basketmakers. 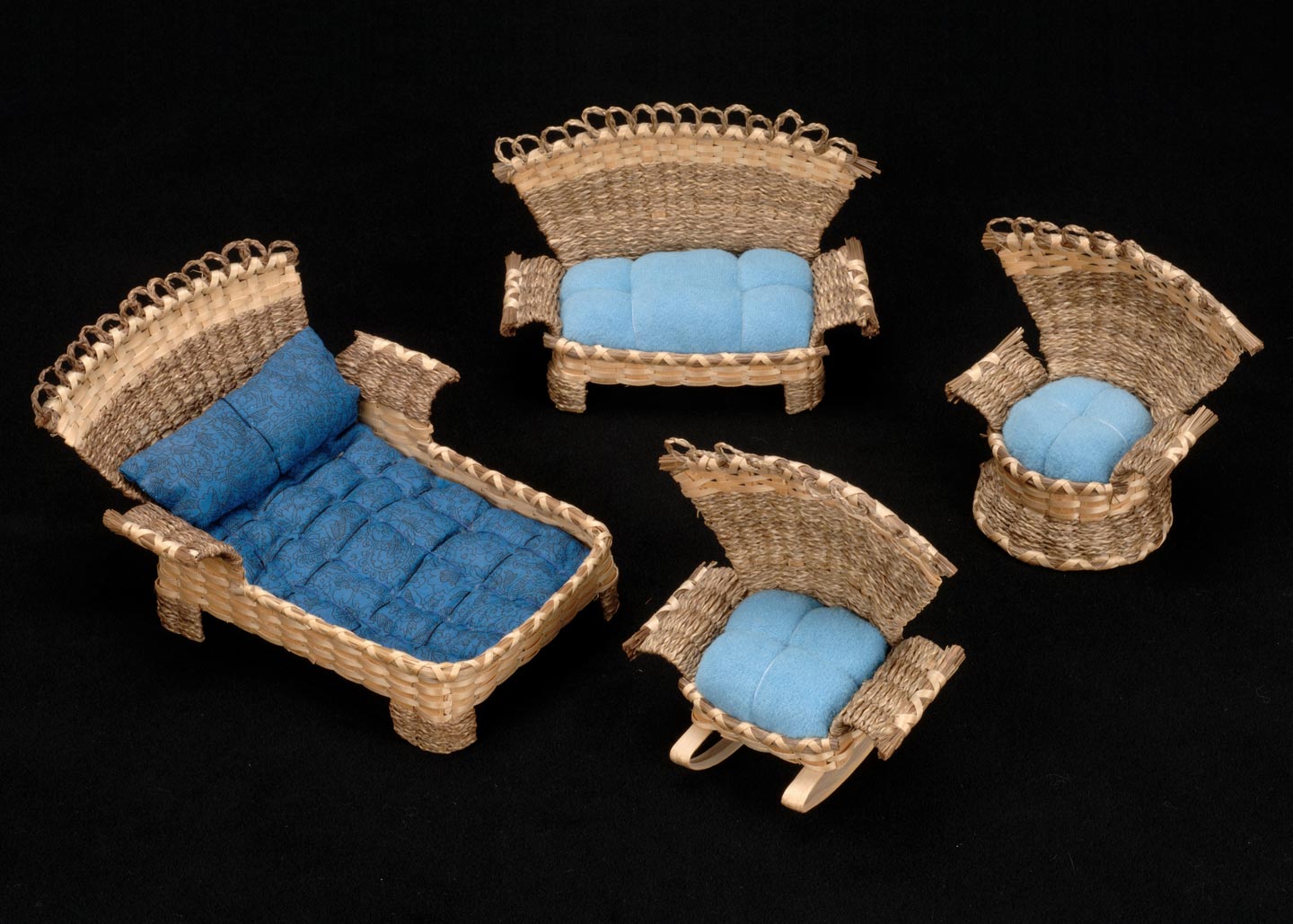