Description: One who follows the track of the elephant never gets wet from the dew on the bushes. —Akan Proverb

When first meeting this palm-sized brass animal, it is hard to grasp the rich and complex layers of history and meaning that he carries on his curved back. One cannot immediately determine who he is–rhino, boar, beetle? But it is likely that he is an elephant, with large tusks and a curved trunk. There is something incredibly endearing about this figure, his hunched back, brushy tail, and droopy ears, all of which seem somewhat far from the chiefly animal he embodies. Yet, regardless of the specifics of his appearance, this animal serves as a reminder of power, wealth, and status in Akan history.

The Akan kingdoms of the Gold Coast of Africa (in present-day Ghana and Ivory Coast) include various groups such as the Akyem, Akwapem, 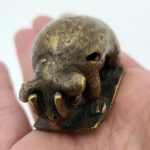 Asante, Brong, Fante, Kwahu, Sefwi, and Wassa, once controlled the extensive gold mining and trade of the ore-rich region. The gold trade was the central form of currency until British colonization eventually forced out the local economy, replacing gold dust with the British sterling pound at the end of the 19th century. For centuries before then, powerful groups, families, and individuals maintained an exchange system around unrefined gold dust. In order to accurately gauge the value of the gold dust, it was weighed on small scales using gold weights like this one.

These gold weights were cast out of brass using the lost-wax process of carving a form out of beeswax and coated with a clay mold. Molten metal is then poured into the mold, melting out the wax and filling the void with the metal form. The results are one-of-a-kind, highly individualized metal objects that served as counterweights in measuring gold dust. On a practical level, the gold weights were highly functional. They were created out of less valuable material, so an individual could have a full set of different weights. Some gold weights have been adapted after being made, adjusting its weight as needed–a leg or arm might have been removed, or the metal could have been filed down.

While the functionality of these gold weights as an economic tool is clear, they, in fact, hold many more complex meanings in their small forms. Earlier gold weights, dating as far back as the 1400s, were often geometric forms with detailed surface adornments. But as time went on, the gold weights also began to take the form of humans, animals, and even inanimate objects like sandals. The variety of forms was not standardized; one person’s chair could weigh the same as another’s bird, each one reflecting a personalized choice on the part of the metalsmith or owner.

The figurative forms typically reflected Akan proverbs, which hold great importance in constructing and maintaining social norms and hierarchies. While the weights were needed to determine the specific exchange value of a set amount of gold dust, the proverbs they told were also needed in supporting the human action of the exchange. The Coe’s small animal gold weight, if we accept the assessment that it is an elephant, could reflect a number of elephant-centered proverbs, many of which focus on the power and status of the animal within the animal kingdom.

As the British colonial powers supplanted the centuries-old economy of the gold trade with their own, these gold weights became increasingly popular as collectibles by Europeans who began to consume and export them in swathes. The British Museum, for example, holds 3,480 gold weights in their collection alone! The complex stories and histories of Akan gold weights, of wealth, power, cultural expectations and hierarchies, and later oppression, colonization, devaluation, and fetishization are a lot to hold within your palm. But, when you pick up this tiny elephant, you can feel the weight of these stories and more—even as you can imagine what it might have countered on the scale. 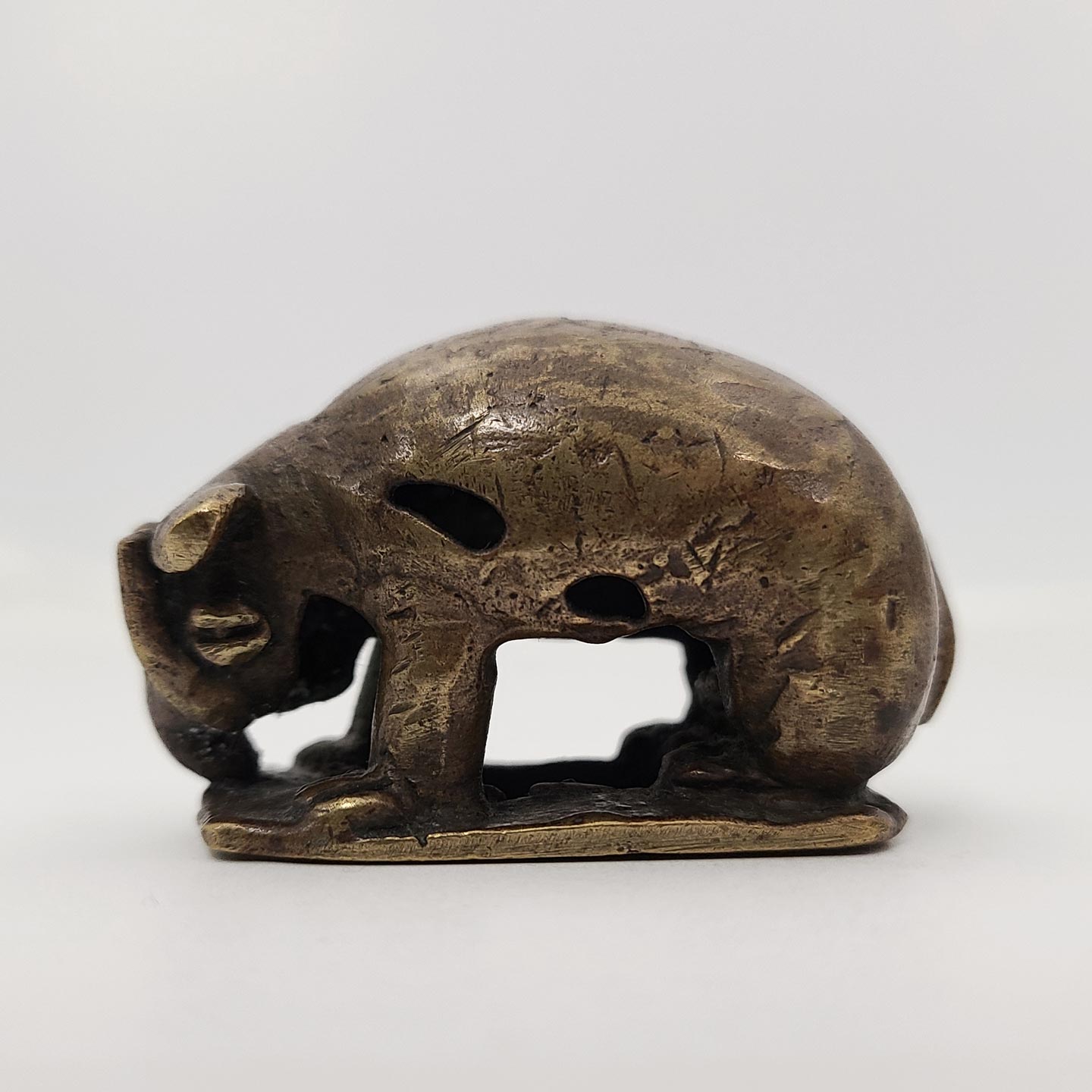