Description: A million memories stored in tombs, graves, and cemeteries, many of which have been raided and excavated over centuries, have been taken out of their homelands and sent to Europe and beyond. With so many lost ceramics and objects separated, we have a limited ability to understand such mysterious desert cultures and civilizations across the expansive sepia terrains of today’s coastal Peru. It is no wonder that in subsequent years the emerging remnants of such vessels and precious objects such as this one are highly regarded and valued by hundreds of archeologists and anthropologists to compose the story we have of these civilizations today. 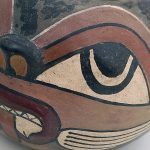 So far, what is known of the polytheistic and pantheistic Nazca peoples (100 BCE – 750 CE) is that they were keen fishermen, farmers, and warriors. Their homes rested along tributary rivers, and their religion was linked to powerful deities, such as the sun and other earthly and underworld spirits. There existed many worlds all at once, to the point that some of their ceramics portray shaman beings and deities known to harness power and forces and able to transit between planes of reality with the aid of hallucinogenic plants.

Today, the Nazca civilization is famous for its mysterious giant carved geoglyph Nazca lines that stretch for miles across the tawny Nazca Desert in southern Peru. Best seen from the air, the purpose of these dozens of lines and images carved into the desert—such as the monkey and hummingbird—are yet to be defined. Could they have been created as religious messages to the cosmos above? Who were they communicating to, and why? Or perhaps they were created for more practical reasons to define water aqueducts that existed below the parched earth or served as an agricultural calendar? Or maybe it was a way to record astrological phenomenon and star constellations? Some say it was to loom large textile patterns of cloths to later wrap their dead.

Many questions remain unanswered. But the story does not end, and on the contrary, continues to be developed.

When it comes to pottery, as seen here with this beautifully painted feline vessel, the Nazca culture was known for their unique sundry colored slip painting techniques, being experimented with beginning around 200 BCE by their Paracas ancestors. It is no coincidence that in this particular vessel of chestnut-colored interiors, one can see a depiction of at least four different mineral-based pigments: black—like their deep ocean seas; brown—like their alluvial soils; red—like the blood that ran through their ayllu lineages; orange—like the reflection of their golden metal masks; and white—like the fog banks from the ocean that would warm their homes during long winter months.

According to archeologists, the variety in colors represented a unique collection only found during the Early Intermediate Period (100 BCE. to 650 CE) and later defined as the Nazca culture. It appears Ted was very fortunate to have come across this vessel in the early 2000s in Sante Fe, New Mexico. The piece was originally from the collection of German-born writer, artist and illustrator Richard Erdoes. Erdoes was an avid supporter of the American Indian Movement and an activist in Native American civil rights.

The majority of symbolic figures depicted on Nazca pottery are now known to represent “mythical beings” or creatures that symbolically represent air, earth, and water, 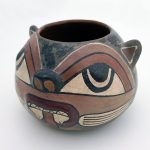 among many others, such as this scarlet-lipped whiskered feline. These mythical nature creatures were part of the Nazca spirituality. A full zoomorphic Nazca geoglyph shaped like a cat was discovered in October of last year—the puma or jaguar is thought to be representative of powerful earth forces for the Nazca shaman. As for the meaning of the mythological feline creatures of the Nazca, not much is known apart from the existence of the spotted territorial feline, perhaps the personification of Pachacámac- “the soul of the world,” or the puma or cat of the water or the lakes, as generous spirits for agriculture. However, what has come to the surface due to the numerous discoveries of cat-like images in Nazca art is the high regard as sacred creatures of the earth as deities to summon fertility and abundance.

The Nazca society survived through difficult climate changes and dry periods. As a response to changing times, through underwater aqueducts and irrigation canals, they developed sophisticated systems to access water originating from the Andean mountains. Although there is little evidence of their political organization or aspects of their everyday life, it is now known that the Nazca culture began to dwindle and be replaced by the Huari culture (600 CE-1100 CE). Yet, researchers have found complete destruction of their forests through agricultural development and the resulting loss of native trees, such as the huarango, and shrubs that protected the earth from erosion. The resulting vulnerabilities to flooding, food loss, and environmental strain led to increasing societal weakness and subsequently to its collapse.

Perhaps these floods have erased fragments of the Nazca Peoples. Still, their unique stories reflected in the ceramics and pottery remain to pierce through the brindled history of ancient Nazca heartlands. It is only in a matter of time as more information is uncovered and terrestrial mysteries solved, sacred objects may be buried at peace with their ancestors once again. 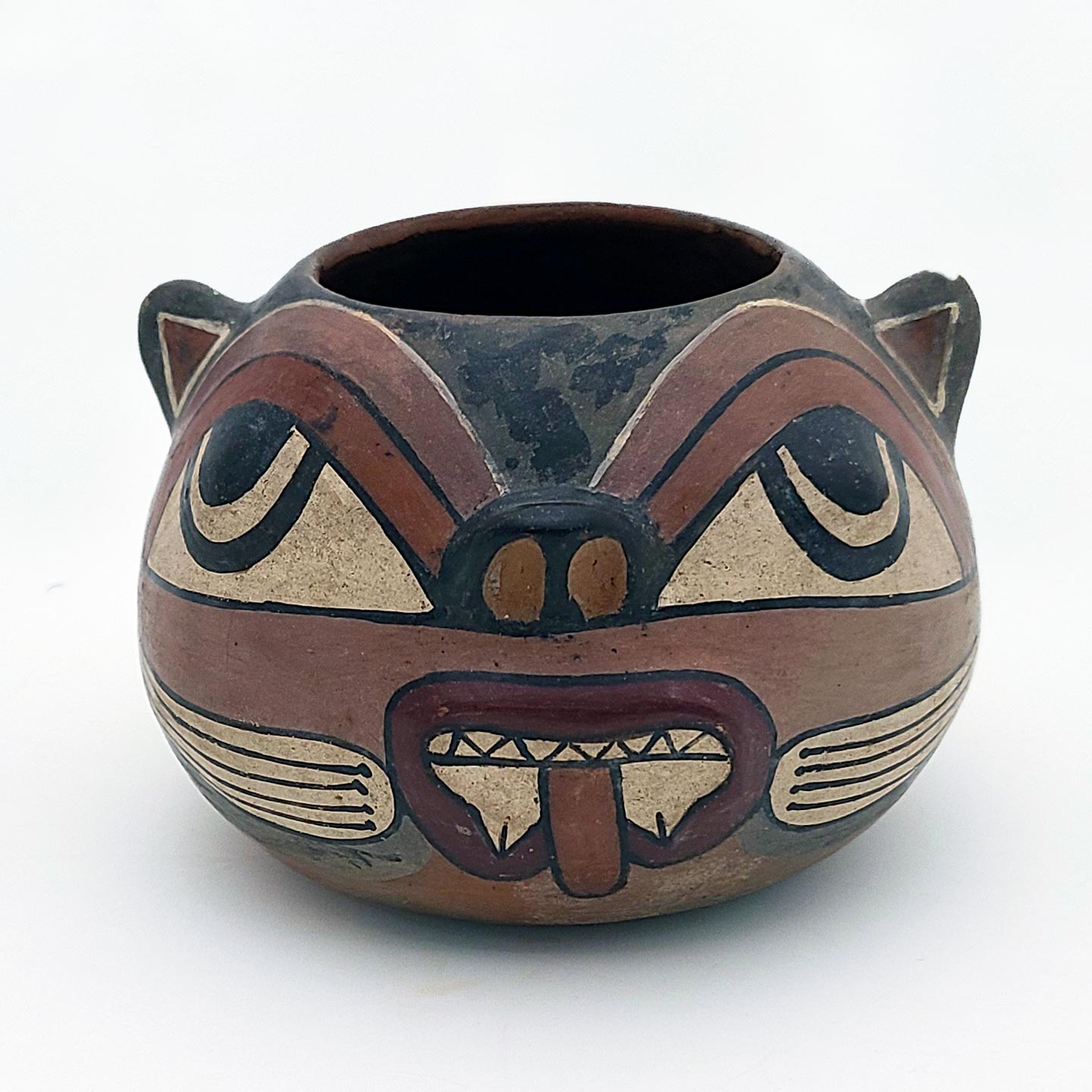