Description: It is an incredible honor to interact with clothing that has been worn. It is something that we perhaps take for granted, particularly those of us who love vintage clothing, estate sales, and loved pieces from the past. Along with the excitement and thrill of being able to step into the past, quite literally, through another person’s shoes (or dress or jacket) comes the responsibility of acknowledging the previous wearers and places and times in which they lived. While the experience of

holding clothing in an institutional collection is in many ways very different from a personal wardrobe, we hold true that these pieces of attire carry histories in their very fabric and stitches. These histories go far deeper than their maker or designer, whether the items are handcrafted Indigenous wear from generations ago or a sweater that belonged to someone’s grandmother.

The Coe cares for a number of items of clothing, some of which were bought new and thus never fully fulfilled their paths as wearable goods. Instead, these pieces were instantly transformed into “art”. These works have much to tell us, but it is the less defined stories present in the worn clothing that often pulls us in. Some might see this as a marker of “authenticity”. They become “real” because of their use. Far beyond this false categorization, however, is the closeness of life present in an individual piece of apparel that really speaks to us.

The style of the jacket itself is part of a long conversation between times and cultures. The Huron-Wendat have lived in the broad area of what is now called the St. Lawrence Valley and the Georgian Bay of Quebec and Ontario. The Huron-Wendat Nation today is centered in Wendake, which is within Quebec City. The endonym Wendat is a collective name meaning “the people” or “the people of the island”, which was supplanted by French settlers who called the group Huron, meaning either “boar’s head” or “lout” and “ruffian” in old French. Before the arrival of the French, the Wendat confederacy was made up of aligned groups of the Iroquoian-speaking 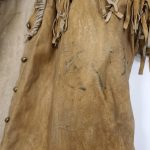 peoples of Attinniaoenten (“people of the bear”), Hatingeennonniahak (“makers of cords for nets”), Arendaenronnon (“people of the lying rock”), Atahontaenrat (“two white ears,” i.e., “deer people”) and Ataronchronon (“people of the bog”). Their established agricultural communities were upended in the early 17th century as the French pressed into their region, bringing along a series of devastating pandemics and increasing war with neighboring nations.

Even as alliances with the French further undermined the stability of the Wendat peoples, the resulting cultural production reflects an inevitable exchange between Wendat and French communities. This jacket, with its military-influenced epaulets and floral motifs, is a perfect example of how Huron-Wendat makers brilliantly adapted to changes in their surroundings. Over time they adjusted their production to satisfy not only their own needs, but the ever-expanding economic pressures from the French, other European settlers, and eventually, tourists. In that sense, it resembles this coat, now in the collection of the National Museum of the American Indian (NMAI). The NMAI coat was acquired by William Ockleford Oldman (1879-1949) who’s business “W.O. Oldman, Ethnographical Specimens” was based in  London sometime before 1919 when it was purchased for the Museum of the American Indian. The similarities in style between these two pieces highlight the strong and ongoing influence of the European military-style of coats and jackets, even as the differences show the likely years that passed between the production of each. The moosehair embroidery, in particular, of the NMAI coat, distinguishes the two, as does the fringe on the jacket in the Coe collection.

The detailing of the jacket that the Coe cares for is beautifully delicate. The sinuous vines on their perplexing coral stems work their way up the front lapel and along the 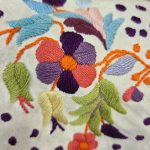 epaulets, sprouting vibrant flowers and leaves in hues not necessarily familiar from the natural world yet just close enough to feel deeply soothing. The white, unsmoked hide that hosts these areas of detailing further heightens the visual impact of the embroidery even as only a few shades of difference mark the contrast between the white and brown. All of this is capped off with the simple drama of rows front and back of movement-capturing fringe.

The marks of wear presented in this jacket, which might in some views devalue the piece, remind us of the life of the jacket and its past owners. There are several small burn holes across the hide’s surface, some pigmentation of the front chest perhaps from an errant pen or marker. The wonderful brass buttons have been crushed in around the waist area, perhaps from the wearer bumping up against something. These all make the jacket less pristine, but they aren’t necessarily the kind of “patina” that a collector or museum necessarily takes pleasure in. They reveal more of the messiness of life lived in a piece of clothing, which is precisely the point of taking time to step into experiencing the materials from another time. 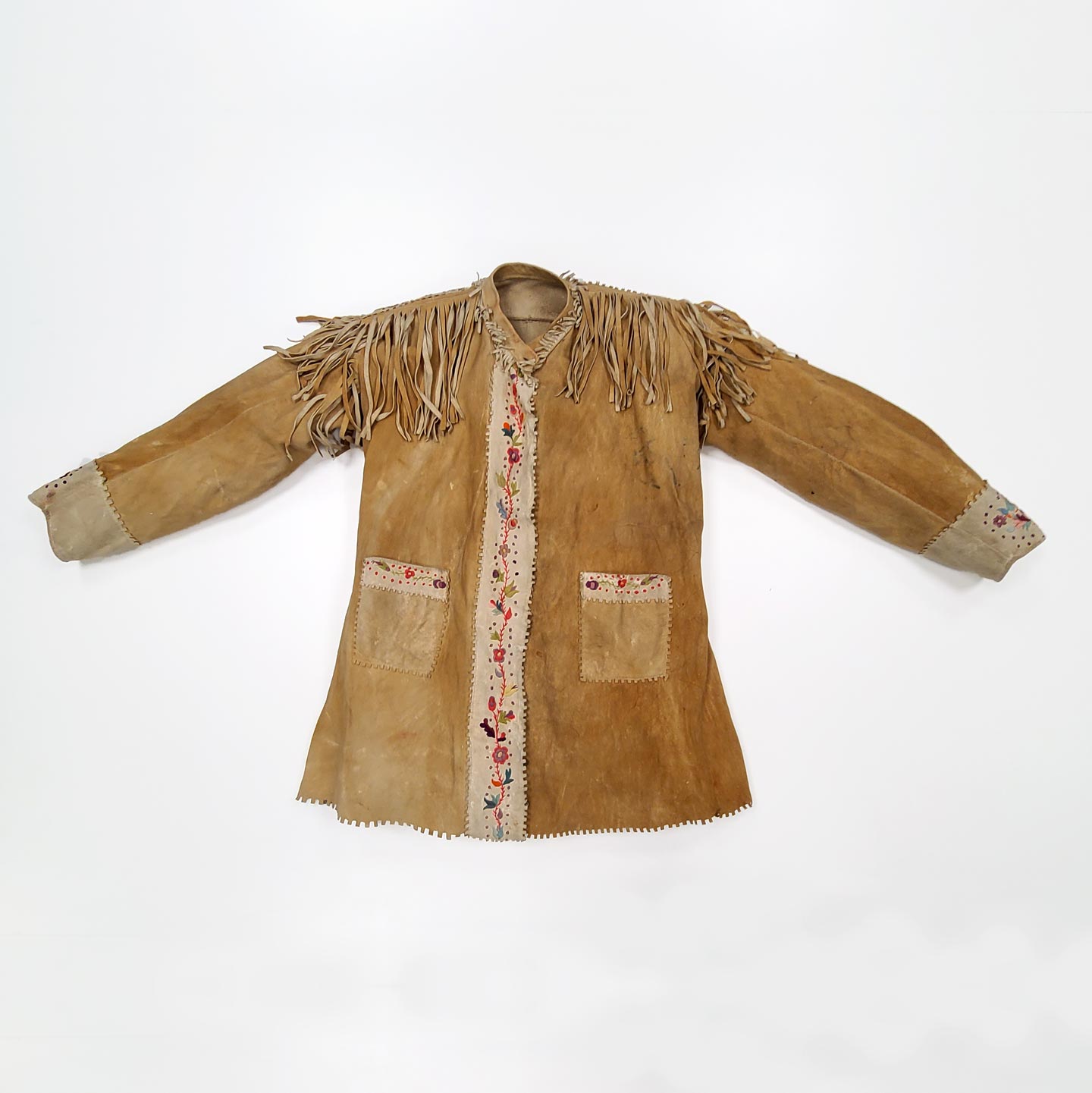