Description: The Zulu Empire was one of the most undermined and unknown empires of today. Despite it being famous for King Shaka Zulu and their famous battles against the British, their power, structure and society were not very well known among historians and the general public due to most of the evidence, stories, and knowledge being transferred and conveyed orally.

What you see here is also known as the Nguni spoon, referring to the ancestors of the Zulu Peoples. According to Zulu storytellers, Nguni lands were originally the mystic lands of the great lakes, as the people journeyed southwards to find new fertile land, rivers and streams, and nutritious pastures for their livestock. With more information and evidence gathered over the years, we know today that the Zulu empire grew to be extravagant, abundant in resources, and soon covered many many miles of territory across plateaus of savannahs, bush velds, and grasslands.

To live in the southern African wilderness was no small thing. With predators lurking, and large terrains to maneuver in keeping enemies at bay, Zulu 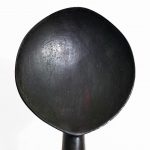 families traveled in large settlements or chiefdoms based on clans, often staying in one location for years, if not generations, using subsistence agriculture and hunting as their livelihood. Often, they would plant native grassland plants like the sorghum, and other carbohydrates like cassava, and maize. Green vegetables and game meat were often eaten during mealtimes along with porridge and Zulu beer or Umqombothi—prepared by the women with their secret recipes. Families would gather in large groups and eat together. Meals would be passed around, along with juices and milk. The spoons used varied in length depending on the dish served and how close the hand would need to be to the meal.

This piece was purchased in South Africa by an American in the 1990s and was later acquired by Ted in 1997. Very little is known of the ladle, other than its Zulu aesthetic presence, and its likely use as a prized Nguni spoon for the preparation or serving of food. Spoons such as this one would have likely been used at meals, as these types of wooden artisanry ladle, mainly made from umcaka wood, were specially carved and used on special occasions. They were considered to be heirlooms to be passed down to the next generation.

Each spoon had its personal holder and was to be used by that specific person only. Receiving a Nguni spoon as a gift was considered an honor. Owning a decorated spoon such as this one, with its repetitive horizontal engraved lines, or amasumpa—a type of raised Zulu carving motif, was highly regarded and reflective of an affluent family.

Common usages of such spoons, depending on its material, size, and shape, were used as kitchen utensils, but others were used for ceremonial and/or tobacco snuff purposes. These latter spoons were usually made out of bone, ivory or horn, and were usually small in size. At times, snuff spoons were worn by men, who often would carry them in their hair, as hairpieces. Nonetheless, these types of spoons were also linked to meals since sharing tobacco was considered an important ceremonial element to major family gatherings and feasts.

Today, their descendants, the Zulu peoples, continue to carry their historical pride in today´s democratic South Africa. The Zulu monarchy continues to exist and is protected by the South African constitution. And so do their foods, gastronomy, and exquisite tastes reflecting the mythical origins of their ancestral Nguni lands. As the Zulu proverb goes, Soyicel ‘ivutiwe—We’ll ask for it (meat) when it is cooked. We wait and see the end.

South African artistry, answering the needs of both utility and style, applied its remarkable approach to design in snuff paraphernalia that doubled as eye-catching accessories. These two thin snuff spoons were worn as hairpins, https://www.1stdibs.co.uk/furniture/folk-art/tribal-art/late-19th-century-tribal-zulu-snuff-spoons-south-africa/id-f_14096471/

Wood spoons – from the kingdom of Swaziland. Description: A fine trio of spoons used by Swazi (and Zulu) peoples to eat “emasi” curdled milk Very well made with good patina.

Snuff, the inhalable form of tobacco, was a scarce commodity, and snuff usage was a sign of wealth. This spoon for taking snuff doubles as a comb, which also acts as a piece of decorative jewelry when not in use 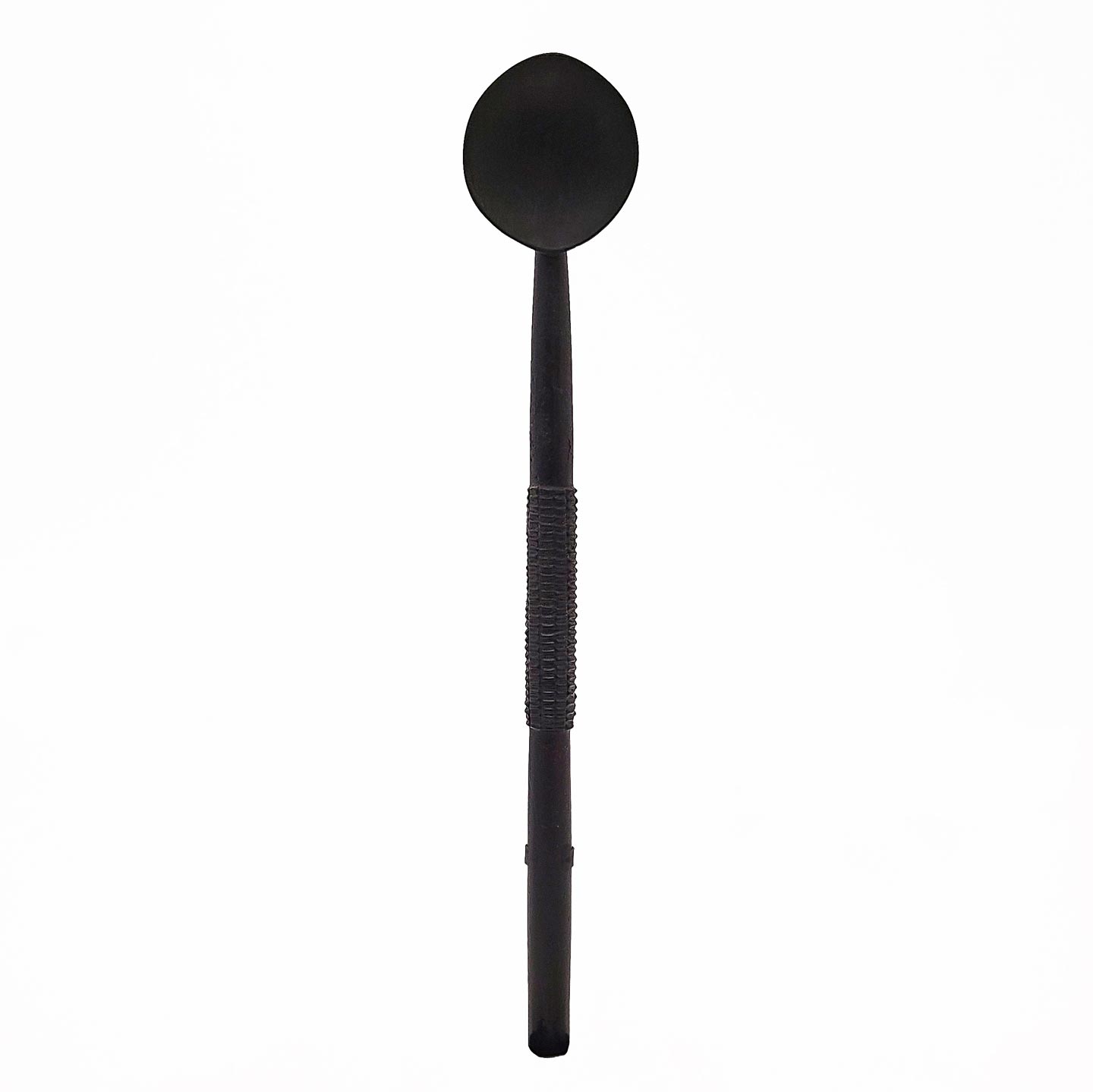