Description:  Is it a manta ray? Or is it a human? Or both?

The Moche valley is an extensive arid piece of land that extends along the coast of modern-day northern Peru. During the Moche civilization (c. 100-750 CE), societies depended on agriculture and an extended sophistication of human-made irrigation and water canals provided by the Moche River. Despite their seemingly consistent access to gold, silver, precious stones, water, fruits, corn, squash, beans, and other foods, sacrifice was usually held to ensure this abundance. In most cases, those sacrificed were the elites, prisoners, or even warriors. Archeologists have identified a political organization of localities stratified by irrigation systems and towns.

The Mochica of the Moche Civilization were known to be a warrior culture, depending on their ceremonial rites to interact with the parallel world. 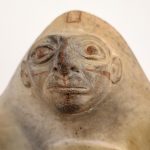 According to archeologists, they were not one homogeneous culture but a conglomeration of many smaller ones. Today, the Mochica and Moche Civilization are best known through their artfully crafted cream and reddish colored ceramics, usually made from molds with a stirrup-spout. The molded pieces were individually painted, which resulted in varied pieces even from the same mold. The glossy surface seen here results from a burnished fine clay particle paint, which was often fired in an oxygen-rich environment.

The Mochica were lovers of the sea—the ocean was only an hour walk from the sacred Huaca de Sol y de la Luna temple mountains. Following what is today the Moche river westwards, one of the sources for irrigation systems, one would cross over large agricultural settlements to reach the ocean, a space in which the gods and spirits dwelled. Here the Mochica would make fishing boats using the reeds found on the marshland coasts.

From the ocean, manta rays surely were easy to catch the eye. Known to venture along coastlines looking for food, it would be easy to spot them or their eggs (also commonly known as “mermaid´s purses”) along the sandy beaches. Those familiar with manta rays will know of their “other” friendly face peering from underneath on their belly, where there is a smiling happy being beaming back at you. Perhaps this piece brought a similar smile to collector Ted Coe’s face when crossing upon this friendly manta ray-man.

Moche ceramics expressed almost every daily life activity as well as all living and spiritual entities of their world. Excavated from the graves of the elites and sacred grounds, archeologists point out that fine pieces were made for their corn beer or chicha, while other excavations have exposed mostly pieces of ritual objects and domestic life.

In constant communication with their gods, they performed Sacrifice Ceremonies, a ceremony only performed by the sacred few or shamans. Although ceremonies provide passage to transform themselves into anthropomorphic deities, such as felines, anthropomorphic Moche art, such as this one, were made to tell a story.

So, gather around, and listen to the voice of the storyteller who is about to whisper to you the story of the face found on the manta ray´s belly. Or perhaps the story of the Shaman who would convert himself into a Manta Ray to swim freely in the Sea. 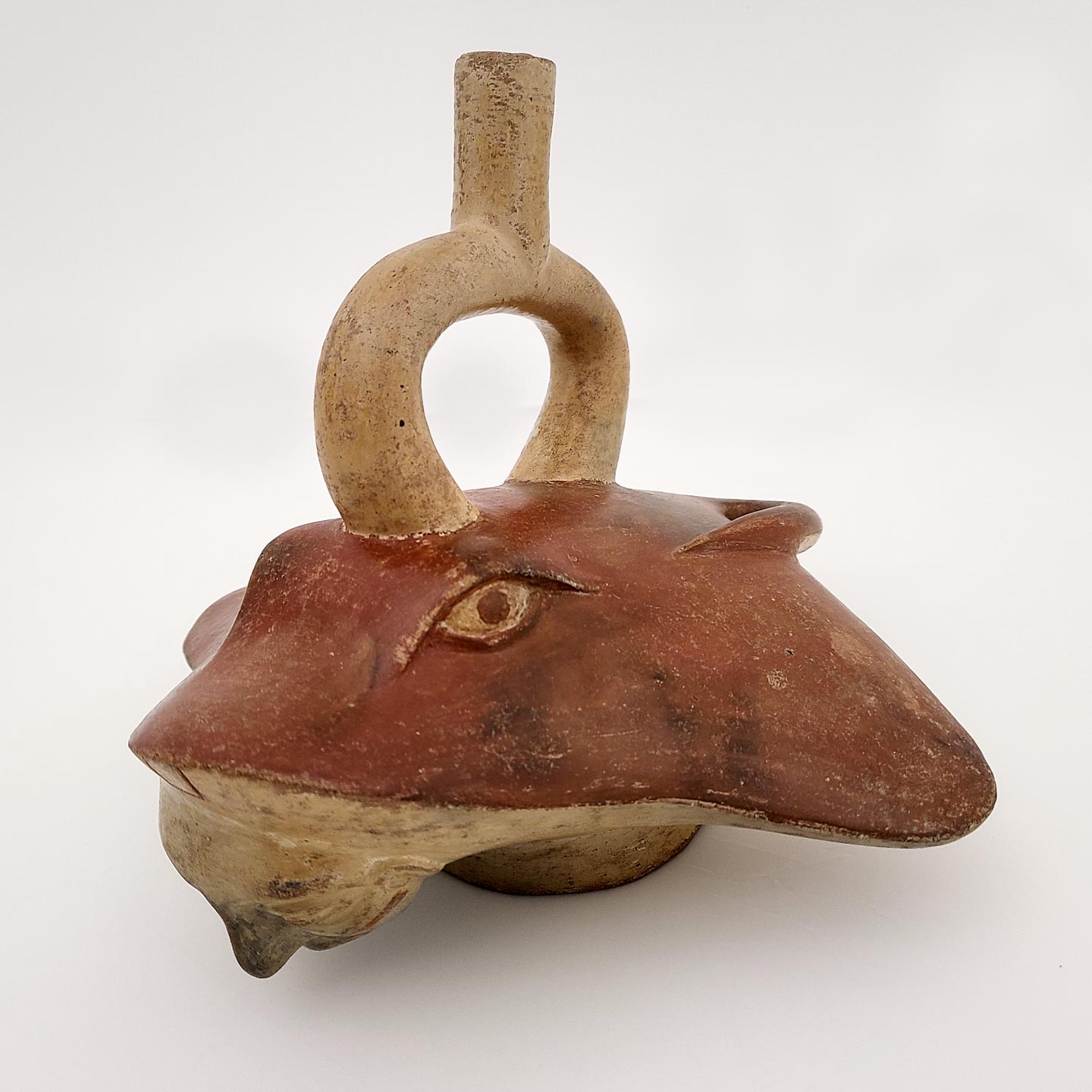