Description:
My grandfather, Rafael Guzman, was originally from Quetzaltenango, in the highlands of Guatemala, a town not so far from where this blouse comes. It is always a pleasure for me to write about Guatemalan pieces.

An unknown artist created this wonderfully embroidered blouse, most likely a Mayan woman weaver, during the 1960s or 1970s in the highlands of Sacatepéquez. Sacatepéquez comes from the Nahuatl word meaning grasshill. Sacatepéquez is known for its textile marketplace in its capital in Antigua, Guatemala. Many Mayan women still wear their traditional blouses in Guatemalan towns and villages. Usually, the textiles are brightly colored and patterned, such as this piece from the Coe Collection.

Exquisitely embroidered, with its fine detailing work, it is the violaceous color that catches the eye. The color of a deep magenta Mayan sunset, flutters of textured colored patterns are scattered throughout. What symbols can you see?

All patterns are linked through rows, stretching from left to right with the name pattern on each row. The scattered colors are soft white, pine green, squash orange, and darker magenta. From the neckline downwards, the artist embroidered a thin striped column with pinks, yellows, celeste, navy blues, and red.

From top to bottom, finely tuned in at its shoulder’s peak, are small triangles set one on top of the other. They are designated as if in a puzzle to simulate an ongoing multicolored chain of up and upside-down pyramids. Looking further down, one sees a dotted patterned layout of small solid circles situated side by side, almost as if the artist sewed a colored beaded necklace. In the next row, one can see the multicolored dynamic horizontal chevron extensions as if dancing to a tune of ornamental willowing trees. Of course, the embroidery creates such finesse in these patterns, so delicately placed, one by one, that their details create imagery of seeds or jewelry. The center of attention, however, is the jagged, sharp zig-zag patterns of white and green, with a lilac purple in its middle, like three sisters standing side by side. Their extended family follows from one side at the top and bottom of the blouse. And then, one can see the matriarch pattern, the central and more extensive and prominent zig-zag pattern across the bosom, with a darker hue to blend in with the magenta-colored background.

Collecting these huipil blouses is like collecting stories and authorship from different lands of Guatemala. Patterns on a huipil traditionally represented a woman’s social or marital status, hometown, and personality. Each woman and region reflects patterns expressing their origin and culture. The weavers link their patterns on these embroidery lines to their place and homeland. According to the story at Coe, this blouse may have originated from San Martin Jinotepeq Chimaltenango, founded in 1825 and located north of the region. As seen in this celebration, the patterns appear in the festivities worn by the Mayan women of the area. Once again, the zig-zag patterns appear in this typical outfit worn by a woman from San Martin Jinotepeq. 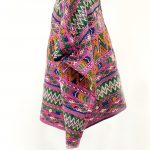 As for the colors found in the weavings, it should be noted that they are related to those of the ancient Maya civilization. For example, according to research by Silvia Ventosa (1985), the motif of the Mayan cross has four arms, each of which symbolizes a cardinal point that dominates the earth. These are related to colors that represent fundamental elements of the Mayan cosmovision: the north would be white and signifies the first man, promise, and hope—the west, black, a sign of the obsidian color, which the Mayans used to make arrowheads. The east, red, symbolizes honey, blood, greed for wealth, and power. The south, yellow, represents the corn of the earth that nourishes. Green is royalty’s color, the royal bird Quetzal, and the talking parrots. The fabrics of Guatemala have blue, red, and white as the predominant background. All the mentioned colors are combined: lilac, pink, orange, lilac, pink, orange, etc.

The Guatemalan dress has an internal language that must be analyzed. The huipil blouse, such as this one, shares a story much more than the geographical origin of the wearer. The fabric is composed of fibers that tell the story of the different trade routes they have traveled or the terrain and climatic conditions that make them possible in their place of origin. And according to Ventosa, the richness of its detailed ornamentation indicates the wearer’s social class, marital status, and age, whether it is an ordinary day or a feast day, their rank in the ceremonies, and the social organization. The decorative motifs show the different natural elements related to the rites of the popular religiosity of the ancient Maya. (Ventosa, 1985)

Before the Mayan weavers discovered synthetic dyes in the 19th century, Mayan weavers used natural hues with a technique uniquely used in their region. Passed down from generation to generation, methods to dye and weave are time-consuming, require a lot of resources, and require skills. Mayan women made tinctures from their natural environment- Sacatepéquez being mostly a tropical forested region. Trees include that of the ilamo species, which produces red and yellow dyes from the outer and inner bark, the Nance tree for rusty red tints, and the Sacatinta plant for blue hues. And what of the purple color? Traditionally, lilacs were created by squeezing snails, or the purpura patula, a marine mollusk, to produce an excretion without killing them. The excreted liquid changes color as it oxidizes when exposed to the air and sun. A more popular purple dying technique is the indigo shrub, used by Mesoamerican civilizations for thousands of years.

Indeed, the creation of such beautiful pieces in ancient times depended on their forests and natural “earth -others.” So often we think that by replacing the “wild” with the synthetic, we are modernizing or incentivizing efficiency. However, if we think about it, the loss of the interdependency and reciprocal relationships with the plant and seed world ends up becoming the loss of traditional knowledge. And, in turn, the loss of forming relationships with our natural surroundings. Mayan weavers revitalize the ancient traditions of looming natural fibers dyed with natural concoctions. These practices produce economic opportunities for young Mayan women and their households and bring the ancestral wisdom of relating with the earth through art and livelihoods. 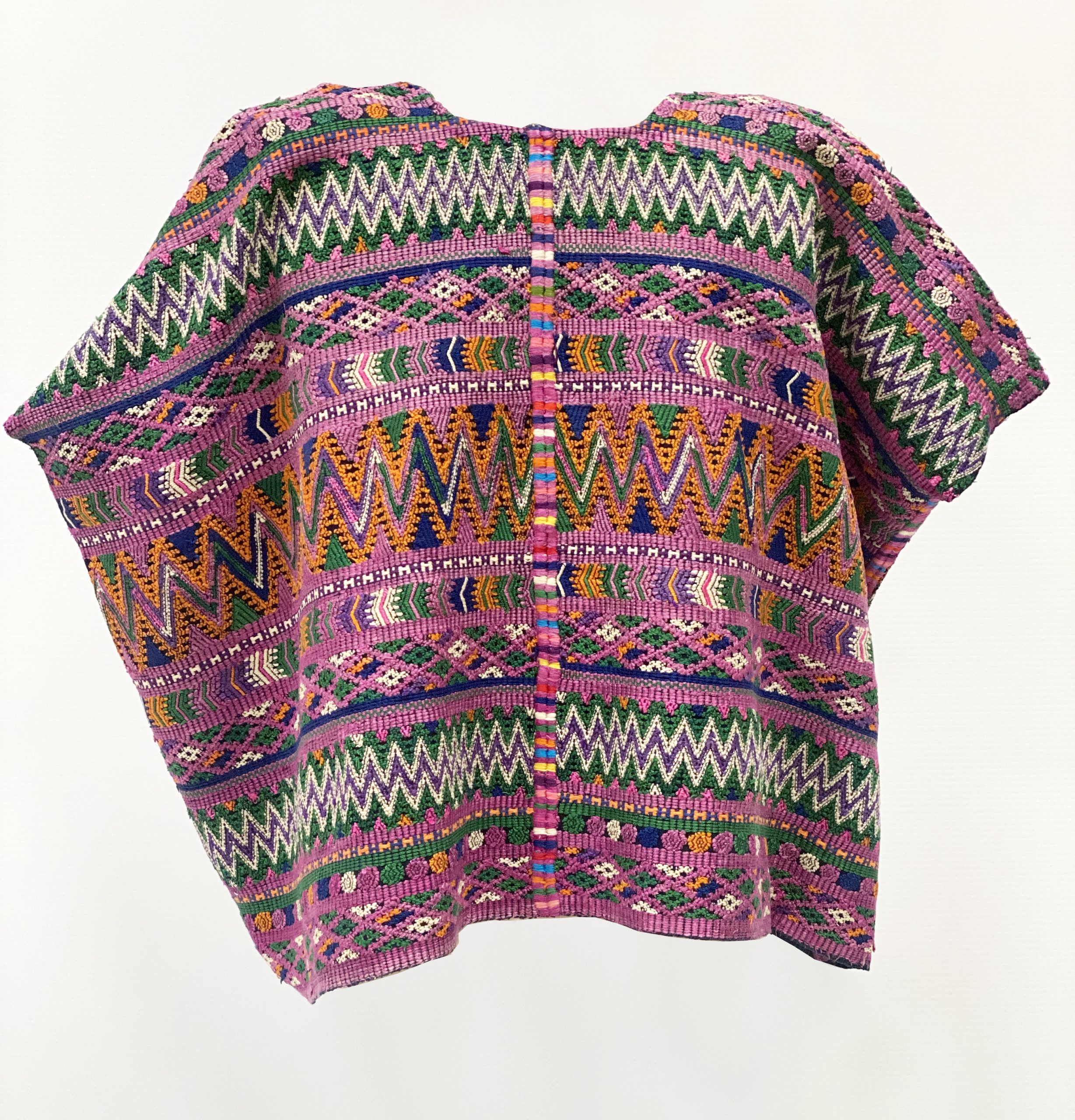 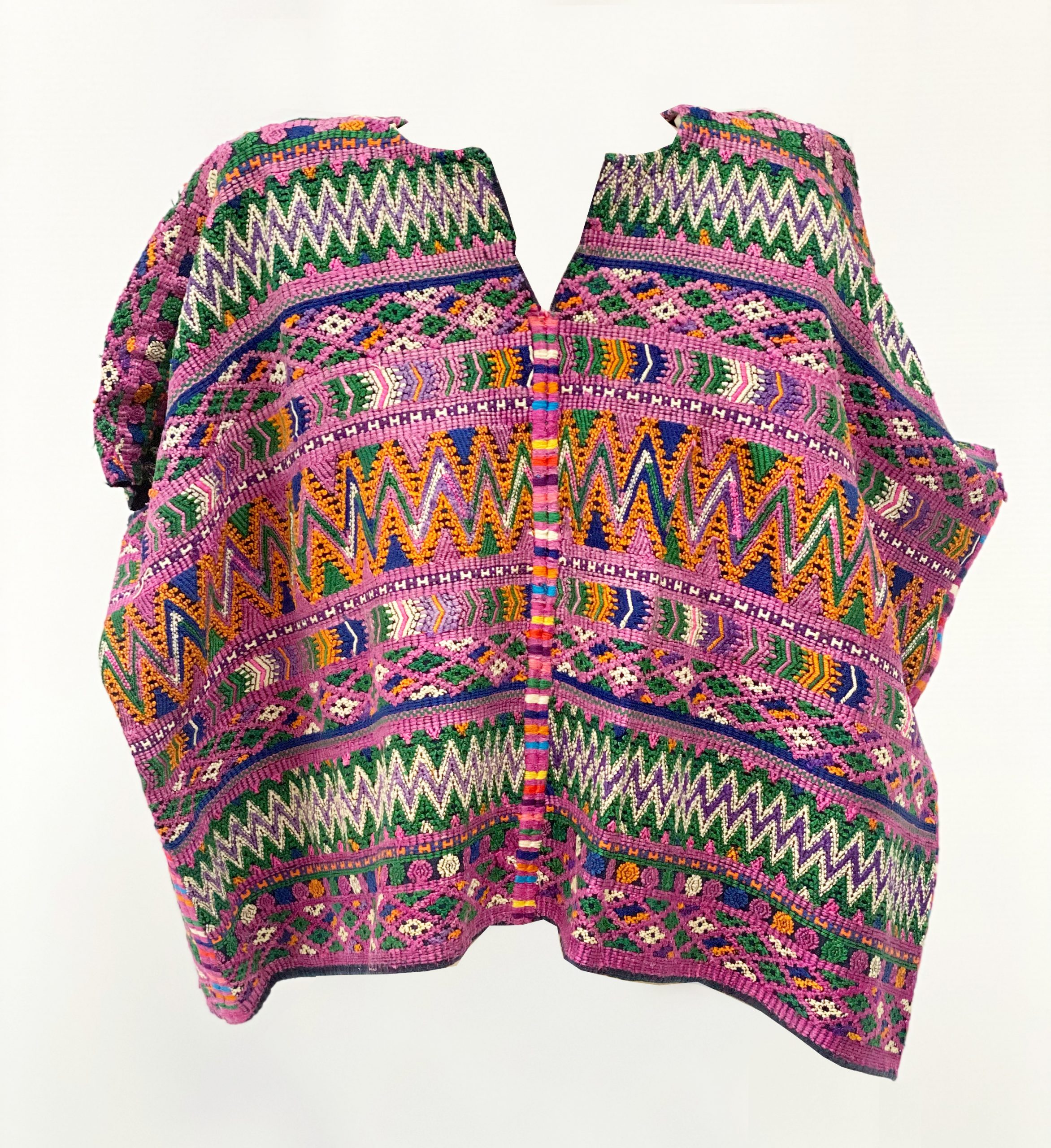