Description: These three bathing beauties created by Seferina Ortiz (Cochiti, b. 1931–d. 2007) embody so many complex layers of history, craft, family, collecting, and even politics. The potters of Cochiti Pueblo have been recognized by non-Natives for their clay figurines since at least the 1880s–when tourism and trains exploded onto the Southwest. While these early figurines, often wryly depicting the very tourists who came to consume them, faded in popularity with collectors over the early twentieth century, a resurgence in such works began in the 1960s in the hands of Cochiti potters who maintained and expanded this form. 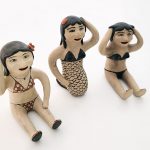 outside market saw these pieces as tourist fare, figurines such as these are deeply rooted in ancient and entirely Indigenous forms that continue to be adapted reflecting the surrounding world. Seferina’s mother, Laurencita Herrera, was a leading artist in mid-twentieth century Cochiti figurines. Seferina’s work was part of that important legacy, and broadly speaking, the very history of the clay that she and her family and ancestors gathered and continue to fuel the work of her children and grandchildren.

These figurines tell a complicated story of subtly commenting upon contemporary social and political issues through the appealing and very marketable form of fun, even funny forms. While Ted’s commentary on the pieces in his collection often focuses on stories of how he came to acquire a piece or a more formal analysis of the work’s design or function, he goes into great detail discussing the motivation behind their creation. He described how the pieces represent a subtle yet pointed commentary on the US Army Corp of Engineers’ building of the dam that created Cochiti Lake and the massive environmental impact that the damming had on the agricultural lifeways of Cochiti Pueblo, as well as significant safety issues around flooding and water contamination.

Speaking more politically than he often did, Ted explained, “Every time I pass Cochiti Lake, I think of ‘here is one more broken promise on the part of the White Man,’ to the Indigenous people of the Southwest, but leave it to the Native sense of humor to drag something positive out of the White Mans’ broken assurance. Seferina has created in her trio of ceramic figurines a satire on not only the corps of Army engineers but on the whole betrayal of Spanish and White invasion of Native land. Hence, these three ‘beach beauties’ sunning themselves on which was once Pueblo farmland.” 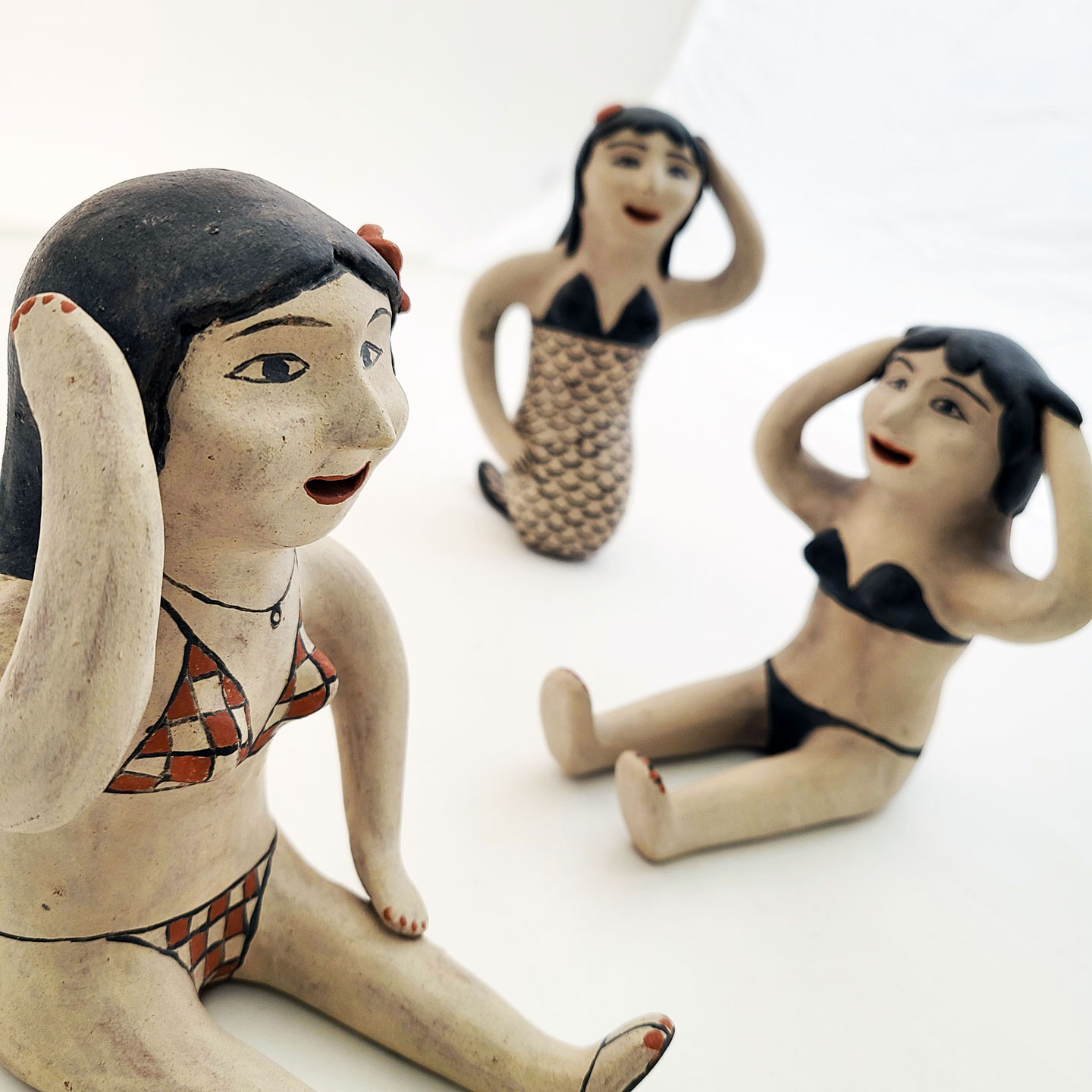