Description: Most of the population in the Fond du Lac Denesuline First Nation are of Dene and Metis descent. There are approximately 2300 members, 900 living on their Reserve, and 1300-1400 off Reserve. It is one of three Dene communities on 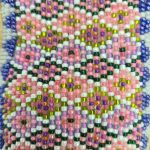 the eastern end of Lake Athabasca in northern Saskatchewan. Fond du Lac is a fly-in community, meaning that it is only accessible by air year-round, with minimal roads even in the summer. Denesuline is a Chipewyan word meaning the original/real people.

Ted purchased this pair of moccasins in August 1993 on a driving trip from Santa Fe. Judging from his purchase records, it appears he drove first to the Great Lakes and then headed northwest and into Canada. Given the August 12 date of his visit to Saskatoon, it is conceivable that he was heading to Crow Fair in Montana. He purchased these moccasins as well as a pair of mukluks (NA0479) at the Trading Post, Saskatoon, Saskatchewan. Saskatoon is 2195 miles from Santa Fe and 700 miles to the south of Fond du Lac Reserve.

He wrote about these moccasins:

The delicately articulated diamonds of which there are several hundred distributed across the upper cuffs and the vamps indicate a great care compared to the rather quickly executed flower designs one finds prevalent. They have a gaiety and a pearlescent character which indicates a type of arboreal warmth… Note how well the “pajama” felt liner on the raised cuffs harmonizes with the beaded designs used to border the cuff. As the shopgirl/owner of the Trading Post in Saskatoon said when I selected them, “this pair really hits it”.

This pair of moccasins is made of smoke-tanned moose hide–after nearly thirty years the, hide still provides a wonderfully distinct and characteristic smell of smoke tanning. This moccasin-style is made of two pieces sewn together causing a raised perimeter seam. This beautiful feature of the moccasins is embellished by the three parallel lines of spot stitched off-white and blue beads above this seam that follow the contour of the sole. The colors echo the flannel pajama lining but are not used on the spot-stitched vamp. The ornamental red felt collar or down-turned cuff is simply sewn to the edge of the ankle opening. This pair of moccasins is aesthetically stunning in its imaginative beading and construction.

Around the Coe, you are apt to hear us say, “objects are stories,” “they are conversations,” “they create conversations.” Embedded in each object is the story of its maker and their relationship to the world around them. But, as objects change hands, new stories are attached, straightforward stories such as Ted admiring and buying these moccasins in Saskatoon. However, there is another, more complex story to be told by the moccasins as well. Perhaps a more personal one because it is of Ted walking away from his meteoric museum career to find himself.

In Ted’s eyes, Northern Canada was worlds away from anything he had known and, further, generally speaking, foreign to his colleagues and friends and fellow collectors of Native arts. Finding this extraordinary pair of moccasins could only further Ted’s belief that contemporary Native peoples continued to produce superior pieces. But as he found out while making the purchase at the Trading Post in Saskatoon, the store clerk made clear that the intention was to sell these moccasins to a First Nations person for use rather than sell them to a collector who would put them on a shelf. But Ted as the undeterred intrepid collector was undaunted by the clerk’s comments. He purchased these moccasins, and being the ultimate educator, he returned to the Canadian north again, and again, searching out and finding Native-made items unknown or unfamiliar to his world, the world of white collectors and curators. This was the world he craved to create, to discover what he did not know and what he might share with others. As he wrote, he relished sleeping outside and in teepees, shaving and washing in gas station bathrooms. It was a long way from Yale and the Nelson-Atkins Museum (previously The Nelson Gallery). As he drove north, the Indigeneity of the land must have become more and more evident to him. It was in this landscape that he found himself.

In 1957, while an art history graduate student at Yale, Ted purchased his first piece of Native American art, a Haida argillite totem pole from Julius Carlsbach, a New York City Indigenous art dealer. In a mid-1960s inventory, Ted lists about fifty Native art objects. His interest reached a crescendo with the completion of the landmark exhibition and catalog, Sacred Circles: Two Thousand Years of North American Indian Art. Opening in London in 1976, the show was brought to the Nelson-Atkins Museum the following spring. Included in the Kansas City venue of Sacred Circles were 700 historic objects, including most of Ted’s personal collection, noted in the catalog as an anonymous loan.

Perhaps most extraordinary during the nine-week exhibition run, every day included some type of Indigenous-led programming–demonstrations, storytelling, dance, and song. Something befell Ted during those nine weeks; he began to think of contemporary Native people and arts in combination with his interest in historic objects and began to turn away from the rarified air of art museums. Within those nine weeks, we have to assume that Ted conceived of his next exhibition project, Lost and Found Traditions: Native American Art 1965-1985. The title, of course, is a bit of a misnomer, there was nothing lost and nothing to be found except from the perspective of a patronizing and still, unaware Ted. The exhibition would introduce him to tens of thousands of miles of travel to meet hundreds of Indigenous people who introduced him to their continued determination in making objects necessary for the continuance and survival of their cultures. For Ted, seeing and knowing the world of contemporary people and arts was a new way of seeing and understanding.

Following the closing of Sacred Circles, Ted took to the road, meeting people and buying the collection of contemporary works that would become the exhibition. Ultimately, after five years spent primarily on the road in pursuit of objects for the exhibition, Ted was given the choice to remain the Director of the Nelson-Atkins Museum or leave his position at the Museum to be the curator of Lost and Found.

The exhibition introduced nearly 450 Indigenous artists. For the most part, these were community-based people who were “unknown” or “anonymous” to the non-Native world. Lost and Found Traditions opened non-Native people’s eyes to some of what they did not know about Native people, perhaps just acknowledging that Indigenous people very much still lived in North America. Further, it helped crack centuries of objectifying and stereotyping that led to the anonymity of Native peoples and the thousands of objects from their cultures sitting on Museum shelves.

Along the way, Ted would often purchase a piece for himself as well as for the exhibition. By the time the Lost and Found Traditions opened in 1986, he had been living in Santa Fe for two years and his life had become driving to see and meet new people and to collect. While his house slowly filled, miles on his truck were quickly added.

His 1993 trip on which he purchased these moccasins represented just such an excursion of meeting people and seeing and buying from the source, one-of-kind Indigenous arts. Upon his passing, his collection became the Coe Center’s core, preserved to help create and continue conversations and narratives that center Indigenous peoples’ perspectives. Our work in these COVID times has been to renew this commitment. To continue and strengthen these stories by linking the Coe collections to Indigenous people and communities. To help Coe audiences acknowledge the Indigeneity of this place and land. 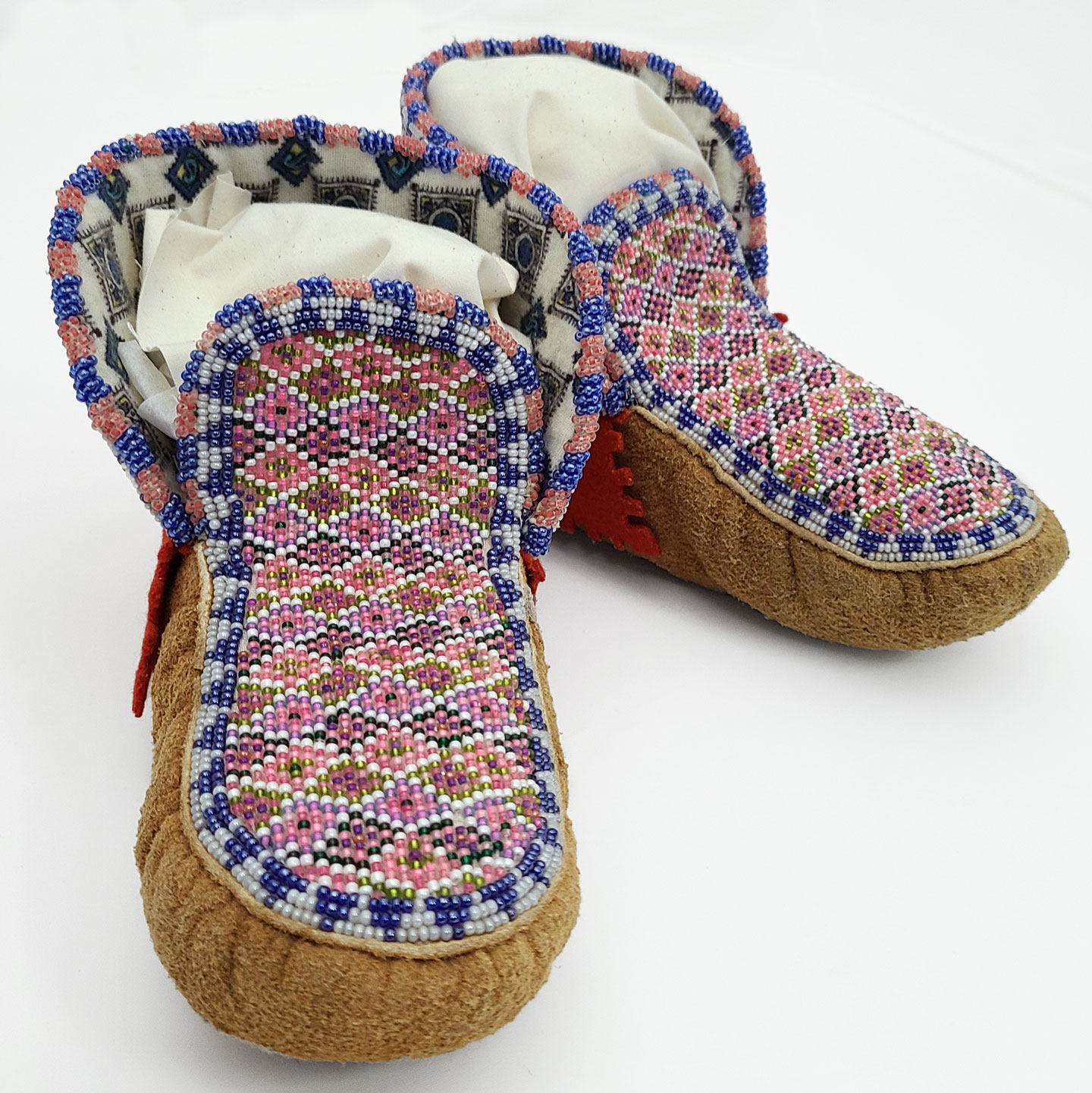