Media: Limestone or chalk with pigment

Description: Visitors at the Coe are often interested in how Ted Coe collected—did he visit and buy directly from makers? Traders? Auctions? Galleries? All of the above. Ted was the non-stoppable collector, beginning in his early 20s. But it was his love of objects that moved him to collect rather than for the sake of accumulating. He choose carefully, with an educated eye.

This Kulap figure is a good example of Ted’s well- trained eye. There are literally hundreds of examples of Kulap figures in public and private collections but very few have the detailing of carving and painting of this particular piece. And the smile is beguiling. By Ted’s recollection, he purchased the figure in Amsterdam in 1953 while traveling with his sister Nancy, noting that after seeing it in a store window he rushed in and without hesitation purchased it and put it in his rucksack where it remained as he traveled around Europe the next few weeks. But one day Coe friend and Board Director Gerald Stiebel while examining the piece noticed a series of numbers that suggested it came from a museum’s collection. Gerald’s research found that the figure was deaccessioned in 1956 casting doubt, by three years, of Ted’s recollection.

Perhaps we’ll never be able to solve the puzzle of exactly when the Kulap figure was acquired. But we only need to look at the figure itself to see its’ intriguing stare and fine rendering and share in Ted’s enjoyment and enchantment with the figure. 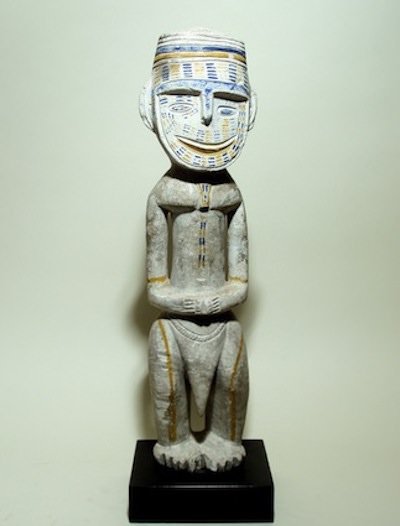