Description: These types of packs have been made with black ash by many Northeastern tribes for centuries for hunting, fishing, and harvesting, but this piece is made from Oak splint. This basket design, with the wide-mouth opening; supportive, weight-bearing straps; and form that molds to the wearer’s back have become widely appropriated—so much so that they are now widely marketed as Adirondack Pack Baskets by non-Native companies small and large, yet the original power of these Indigenous baskets remains strong as Native basket-makers continue to maintain production and use. 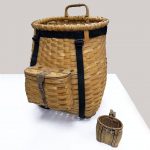 This full-size basket is an impressive example of a typical Pack Basket, with the wonderful addition of a smaller exterior pouch for even more storage and made of oak, rather than ash splints.

If you look at NA0088 you will see how far the form has been adapted over the years. This piece contrasts in form and function—providing an opportunity for us to ponder how it was put to use.

Read more in the 2022 Alison Gusman article below: Abundant Spirits

The Wabanaki Confederacy, “People of the Dawn,” is a confederation of four principal Eastern Algonquian nations: the Miꞌkmaq, Maliseet (Wolastoqey), Passamaquoddy (Peskotomahkati), and Penobscot. The Wabanaki peoples live in areas of abundance on the Northeastern shore, Maine in the United States, New Brunswick, mainland Nova Scotia, Cape Breton Island, Prince Edward Island, and some of Quebec. The historic Wabanaki way of life was abundant—all that was needed for a good life and well-being was upon their reach at their fingertips. They traveled by birchbark canoes to hunt, fish, and harvest. They would gather seasonal berries and roots and collect clams and other shellfish. According to archeological sites, they set up temporary, seasonal camps that included tent-like, birchbark homes called wigwams, meaning “home” in Algonquian-based languages. To let out smoke from the fire inside, Wigwams were cone-shaped and had a hole in the top. Large deer, moose, and bear pelts blanketed the home’s interior space.

The Wabanaki followed the seasons’ changes, and plants, like animals, had their seasons. In spring, sugar maples and yellow birch trees were tapped for sap to make into syrup and sugar. As the weather warmed, Wabanakis harvested and ate milkweed pods and flowers, roots (tubers) of plants such as the Jerusalem artichoke, and the green leaves of a host of flora, including lambsquarters, black mustard, and common burdock. Berries, strawberries, raspberries, and blueberries were among the most favored plant foods and ripened in a series of waves from summer through fall. Each autumn, various edible nuts (acorn, hazelnut, beechnut, etc.) were gathered as they dropped to the ground. Numerous plants and plant materials were steeped to make tea-like beverages: the bark of sugar maple or striped maple, the leaves of checkerberry or wild mint, and the fruit of barberry, black cherry, and many other berry-bearing plants. 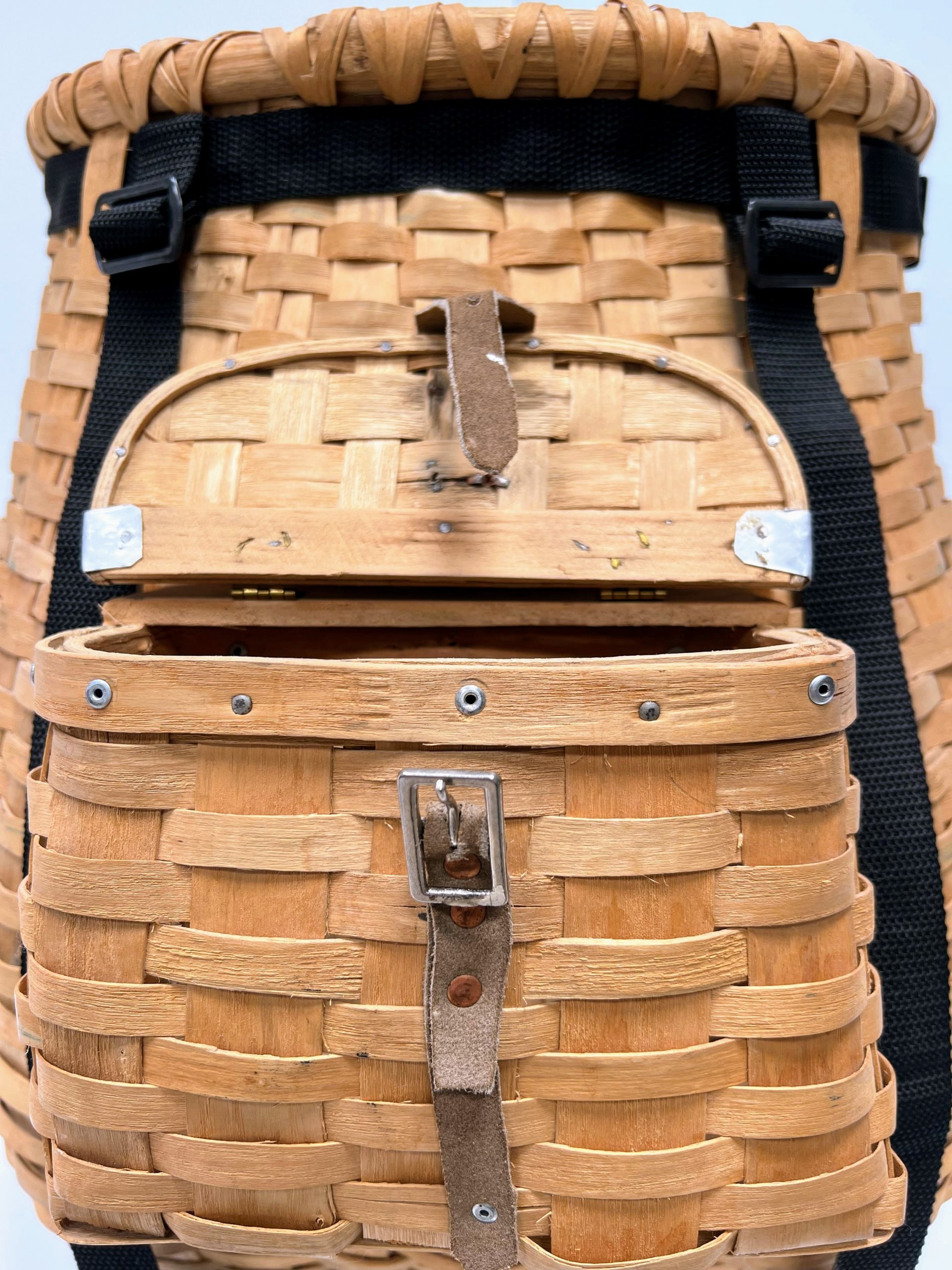 It was no surprise that their lands were greedily eyed by the arrival of Europeans a few centuries ago. The first French to settle in their lands, quickly admired the beautiful landscape and the Wabanaki’s comfortable way of life. The cod fish, for example, was so coveted that French fishermen began to arrive during the early 1500s. Due to its tremendous economic value, the French Navy created a reserve of sailors to fish in the waters. France was essential to the transatlantic fishing industry for much of the 16th and 17th centuries. It sent more ships overseas, harvested more fish than other nations, and maintained a near monopoly of Newfoundland’s south, west, and northeast coasts. They dominated the industry throughout the 16th and 17th centuries.

To finance their industry, the fishermen would kidnap Wabanaki people, including women and children, and sell them into slavery in Europe.. According to historian Margaret Ellen Newell, “the first documented case was in 1605 when an English expedition captured four Wabanakis in what’s now Maine and brought them back to London. Now it is known that captives were key in the successful settlements of the Americas. They were the ones to provide knowledge and guidance to survive in their lands. 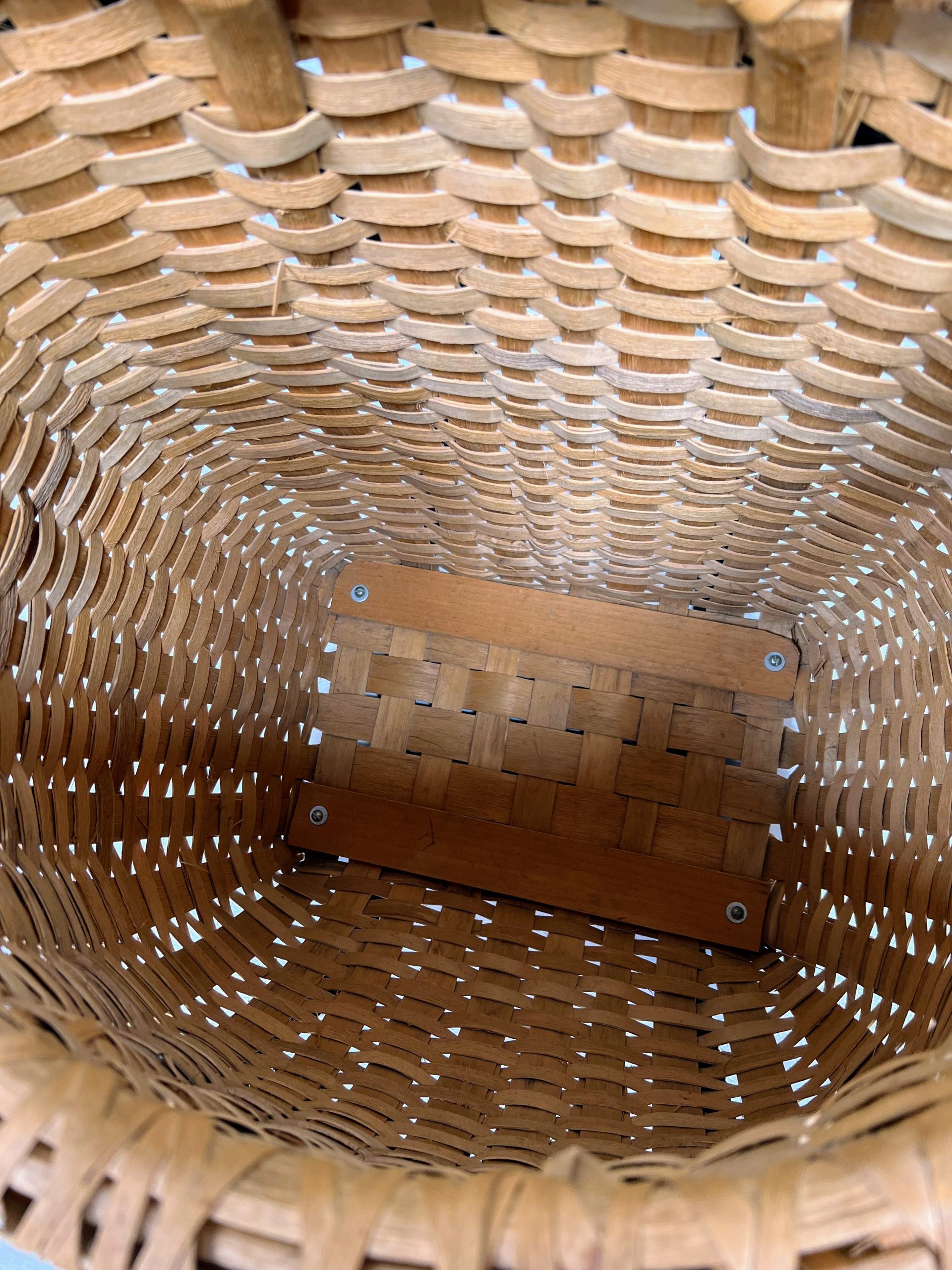 The Wabanaki believe that all life is sacred. However, some plant and animal species are valued more for their use as food, medicine, or to make things needed for everyday life. As you can see with this collection piece, with extraordinary inventiveness as a contemporary object made with modern materials in addition to traditional ones, Wabanakis utilized an array of plants and parts of animals as raw materials to create various items: thread and bone needles, rope made from plant fibers, canoes constructed of birch bark or moose hide, snowshoes framed with ash wood and corded with rawhide, deerskin clothing decorated with moose hair embroidery, and sealskin or moose hide moccasins trimmed with porcupine quill work.  (National Park Service, 2007)

Plants were considered just as valuable and sacred. For instance, Wabanakis used splints from the brown ash tree (fraxinus nigra) to make fish traps. Baskets were made of wood splints and/or sweetgrass.

This particular basket is made of an oak splint. It is believed that Wabanakis selected ash wood even when oak and hickory were available. The major ash species, Fraxinus excelsior, has been affected since the mid-1990s by the fungus, Hymenoscyphus fraxineus, also known as Ash Dieback Fungus. Most recently, the emerald ash borer,  a tiny insect, has rapidly wiped out most native ash species. Therefore, the artist may have opted for an oak splint instead.

Containers and baskets were used to gather fruit and berries, store clothing, maple sugar, and other articles, and carry possessions from one place to another. There has been considerable debate about the origins of this craft. Most Wabanakis say their people have been making wood splint baskets since time immemorial. The 19th-century wood splint basketry grabbed the interest of Maine’s year-round and seasonal residents—and nowhere more significantly than on Mount Desert Island, the largest island off the coast of Maine. Farmers and fishers found uses for a full range of Wabanaki baskets there: from utilitarian laundry, pack, and picnic baskets to “fancy” baskets made to hold everything from combs to embroidery to handkerchiefs and hats. The commercial market for fancy baskets and other Wabanaki goods soared in the late 19th century.

Native tourism operators are adapting by offering a range of authentic experiences to visitors and their communities. “In this reconciliation process that Canada is undergoing, it’s incumbent upon us to teach people who want to learn,” says Cecelia Brooks, co-founder of the Wabanaki Tree Spirit Tours, in 2019. Visitors can take a guided medicine walk through the new Wabanaki Healing Garden at the Fredericton Botanical Garden. Indigenous issues and interest in Indigenous culture have been rising in response to growing awareness. 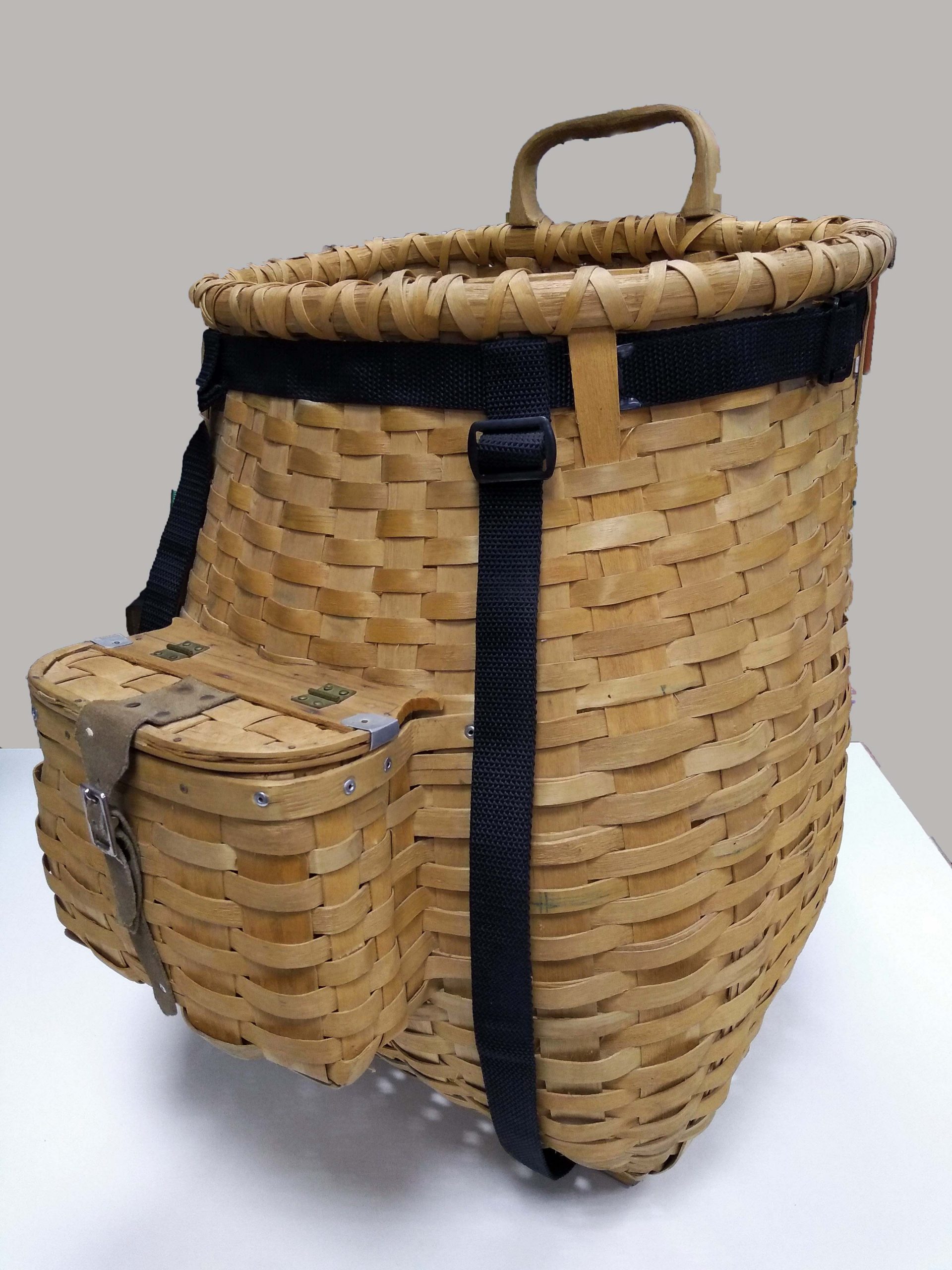 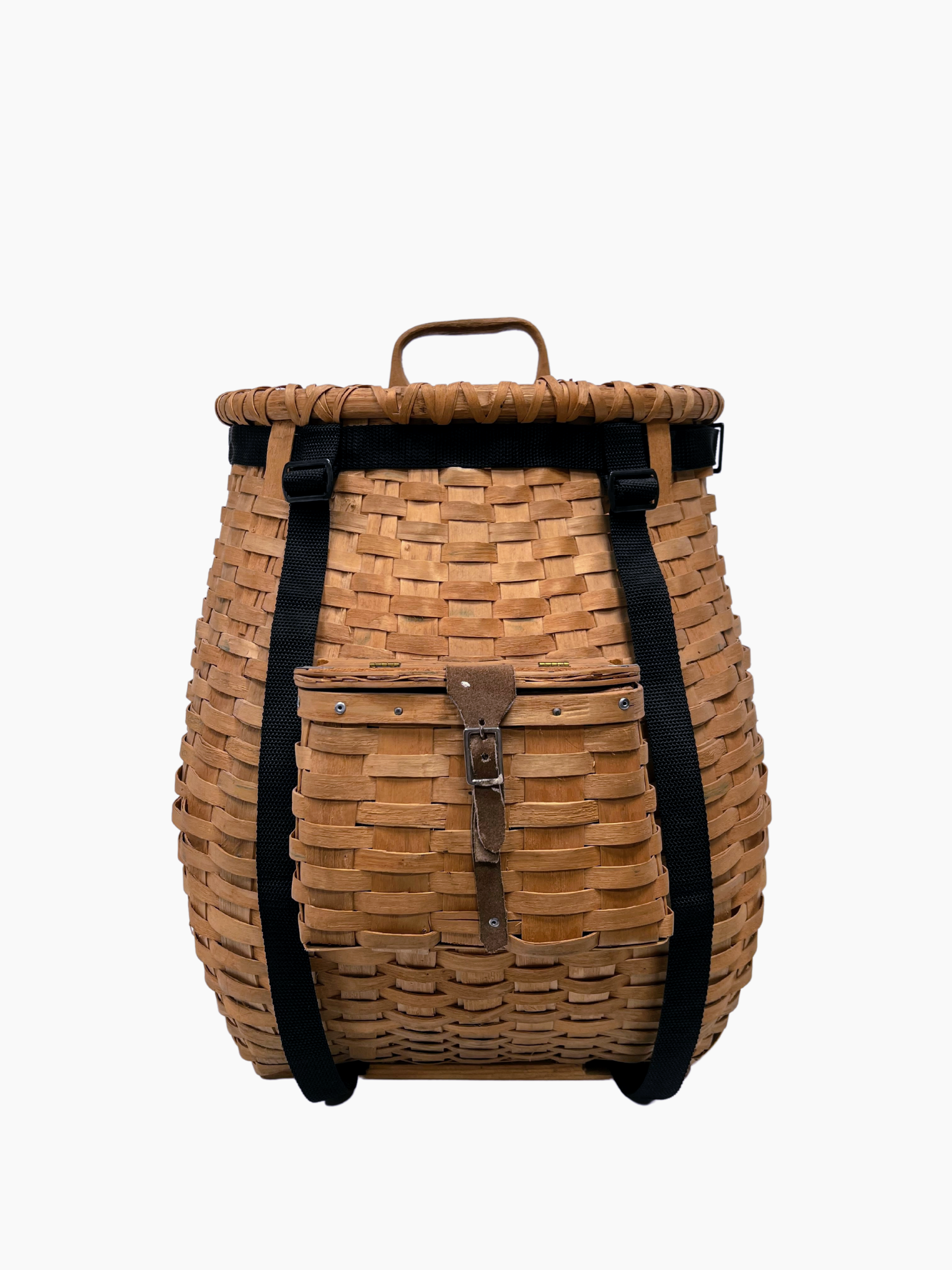