Sculpture of a Haida Woman

Description: We, unfortunately, do not know the identity of this serene Haida woman. Her Haida identity is indicated by her Indigenous face, hairstyle, and some details of her clothing. Her posture suggests someone of stature and wealth. And, she is clearly cosmopolitan, regally holding herself while wearing fashionable Euro-American clothing. Perhaps her name was 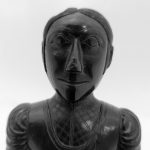 not as important to the carver as her compelling presence that results in an authentic and unblinking portrayal of Haida people as they saw themselves in the mid-19th century–world citizens.

Haida people of the Pacific Northwest region of North America have a long tradition of carving argillite–the grey to black carboniferous shale is exclusively found at the Slatechuck argillite quarry near Skidgate within their territory. A high moisture content makes argillite easier to carve; therefore, it is kept as moist as possible after quarried. It is often wrapped with a damp cloth and stored somewhere moist, perhaps buried in the ground. In its natural state, argillite is often a grey-black or green-black color. The black finish of argillite is usually created by the carver rubbing the carving with oils or polish as it is carved, or he might coat the finished carving with a polish. Other carvers tell us that the natural oils from their skin produce the deep black color. 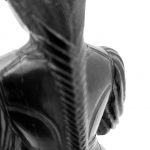 There are two approaches for dating the statuette as being made in the early 1890s. The first is comparing it to other carvings and finding stylistic similarities based on form and subject matter. In the mid-nineteenth century, figures were carved in an older and Indigenous Haida style, while later single figures took on more Euro-American silhouettes. Art historians have also surmised that single-figure forms production began dwindling by 1865 to rise again in 1890.

The second is clothing. The woman’s dress provides a different avenue to help date the figure’s creation. As alluded to above, her clothes are decidedly fashionable and worldly. More specifically, she is wearing 1890s Euro-American style clothing. A fashionable skirt that is the swooping tulip or bell form, snug and smooth over the hips and flared dramatically to a wide hem. She also wears a vest over her waist-shirt or blouse that displays a high collar and high puffs at the shoulder with a tight sleeve.

Whether we enjoy the details of the Haida culture and history and argillite carving, the intricacies of women’s dress in the 1890s, or the sheer splendor and intricate work that created this sculpture, there is something for all of us to marvel at and enjoy. 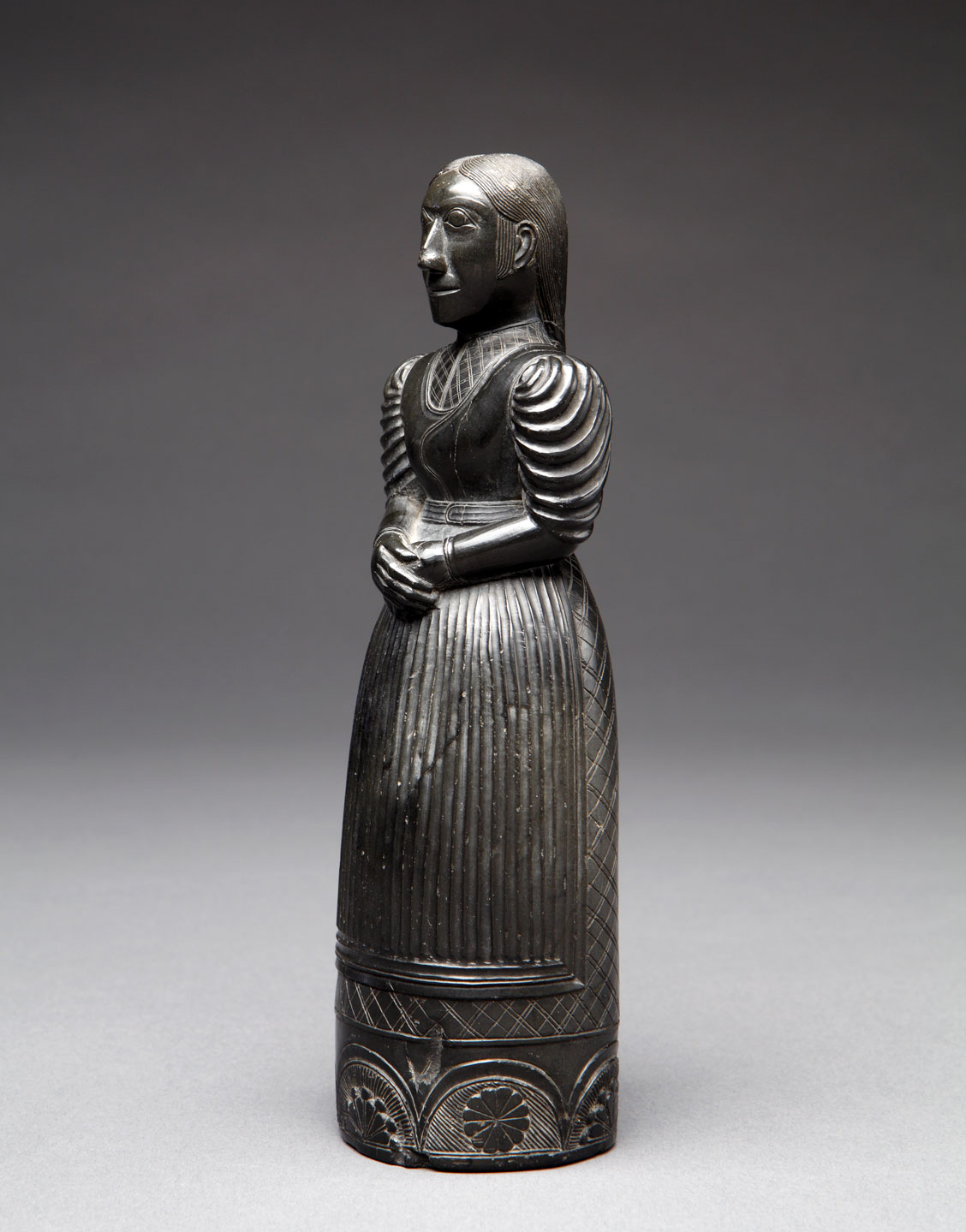