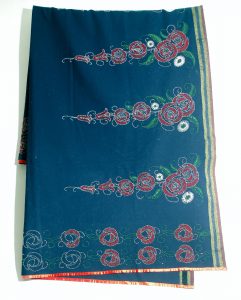 Description: Around 1981, Ted purchased this gorgeous shawl from Osage Councilman Andrew Buddy Gray; the Grays are a distinguished Osage family. Artist and Santa Fe gallery owner Gina Gray (1954-2014) was one of Mr. Gray’s children. Gray was a well-known trader and Osage Councilman from whom Ted purchased eight pieces, today—all in the Coe Center collections.

In 1981, Ted was director of the Nelson Atkins Museum in Kansas City, fortunately for him, that meant he only needed to drive 225 miles to Pawhuska. In 1977, he had completed the monumental project, Sacred Circles in London and Kansas City. It forever changed the Nelson-Atkins and Ted. Ted’s next project was the traveling exhibition, Lost and Found Traditions where he visited Oklahoma Native communities. His visits to Mr. Gray over these years suggest that Gray was one of the thousands of Native peoples that traveled to Kansas City to see the exhibition or was amongst the many people who shared something about their communities with museum visitors as part of the Sacred Circles events at the Kansas City museum. The Sacred Circles programs were held seven days a week for the nine-week run of the exhibition; the programming helping to balance the historic focus of the exhibition.
Shawls have great currency in Oklahoma, they accompany people throughout their lives, shawls are danced, they are gifts and payments, and they tell people about your family and status.
“This blanket shawl departs from the traditional geometrical appliqué design system seen in its Osage variants on many such blanket shawls, however during the 1920s an alternative was to bead large scale floral designs as a replacement… The present example, with its trellis-like stands of gladioli (the trellis idea is particularly suggested by the vertical side borders, which seem to climb) is executed in small, tubular beads… If such apparel was worn today to the Santa Fe Opera or a Carnegie Hall Concert, it would be stylishly in vogue! But the beadwork in this example, for whatever reason, was not entirely filled in along the left upper register. Though not quite completed it must have been, nevertheless, regarded as a family treasure and put aside for future use.” —Ted Coe