Description: Ken Williams, Jr. (Arapaho/Seneca, b. 1983) is widely recognized as a leading beadworker. His work merges earlier Seneca and Arapaho styles and techniques with his own new twist on pictorial imagery—drawing upon Indigenous history, popular culture, and high fashion. Williams was born into beadwork on both sides of his family. Like many artists, Williams began beading as a small child; he was five years old when he started exploring how to bead. He began learning the art form as a small child on Cattaraugus Territory by watching family members and teaching himself by creating small pieces —earrings, pendants, and pouches. As he got older and his skill set expanded, he also spent more time with his mother’s side of the family at Wind River Indian Reservation in Wyoming. Here he was encouraged to invest further in his practice. These early immersions in the beading styles of the Seneca and Northern Arapaho communities are visible in the work that Ken creates today.

However, it wasn’t until Ken was studying Museum Studies at the Institute of American Indian Arts (IAIA) that he began to focus on beading as his primary art form.

Williams credits Teri Greeves (Kiowa), his instructor at IAIA, for pushing him to embrace a narrative within his beaded pieces—to tell a story through beads. In a nod to artists like Greeves and Marcus Amerman (Choctaw Nation), Williams creates elaborate beaded portraits and images, often on the surface of fancy bags or pendants. Ken’s work is part of the continuum of personal adornment, for ceremony, dancing, and even individual expression are part of what makes his work so compelling. Even when his beadwork is displayed in a museum or within a gallery vitrine, it begs to be worn.

Williams remembers when Ted bought this piece from him in 2007. Williams was working at Morningstar Gallery in Santa Fe, and he had just started to show some of his work with the gallery. Ted, a well-loved collector by everyone at Morningstar, came in one day and headed to the small corner case that held Williams’ work. He instantly commented on how excited he was to see this new work. He selected this early pictorial bag, and that began a friendship that both very much appreciated even as Ted came toward the end of his life.

Williams was particularly struck by how Ted approached collecting and artists. Williams recalled that “There was never a feeling that he was trying to buy your friendship, but that he was sincerely interested in the pieces.” Later, when Williams visited Ted at his home and saw his collection, he noted again that “He really appreciated the people that made the pieces.” That personal connection is something that can still be felt in the Coe collection. And there is a similar intimacy held in this beaded bag.

“She’s All That” is one of Williams’ early forays into creating realistic portraits drawn from historic photographs. The title of this piece and its visual, multidimensional play have captivated me for years. By speaking with Williams about how and why he created this bag only drew me in more. Williams recalled that this particular young 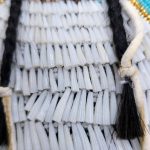 woman stood out to him because he could instantly tell that she was a very important and a very loved little girl because of her full dentalium top. Dentalium, tusk shells of scaphopod mollusks, have been used in North America for jewelry and adornment for centuries. These shells originate along the Pacific Coast and were widely traded. They were, and remain, particularly valued across the Plains. So, the fact that this girl was photographed wearing a shirt fully adorned with precious dentalium is a marker of her importance within her family and community.

For Williams, that love and care resonated out from the historic photograph. In his new rendering of this image, he skillfully evokes those same sentiments and heightens them through his play with depth and dimensionality. The simple intimacy of Ken’s relationship with his subject resonates out through every aspect of this piece. Williams’ incorporation of real hair and miniature dentalium pushes the image off the flat plain of the bag to propel this girl from her lived past into our present. Her eyes look straight out at us, asking (or challenging) us to stay and engage, to think about who she was and what led her to cross the surface of this purse. The use of pink satin, beads, and horsehair not only compliment the robin’s egg blue of the background but perhaps remind us that as powerful and important as this girl clearly is, she was also a child. The honor Ken pays to this young woman reminds us all, whether or not we know her story, to honor both sides of legacy—our ancestors and our children. 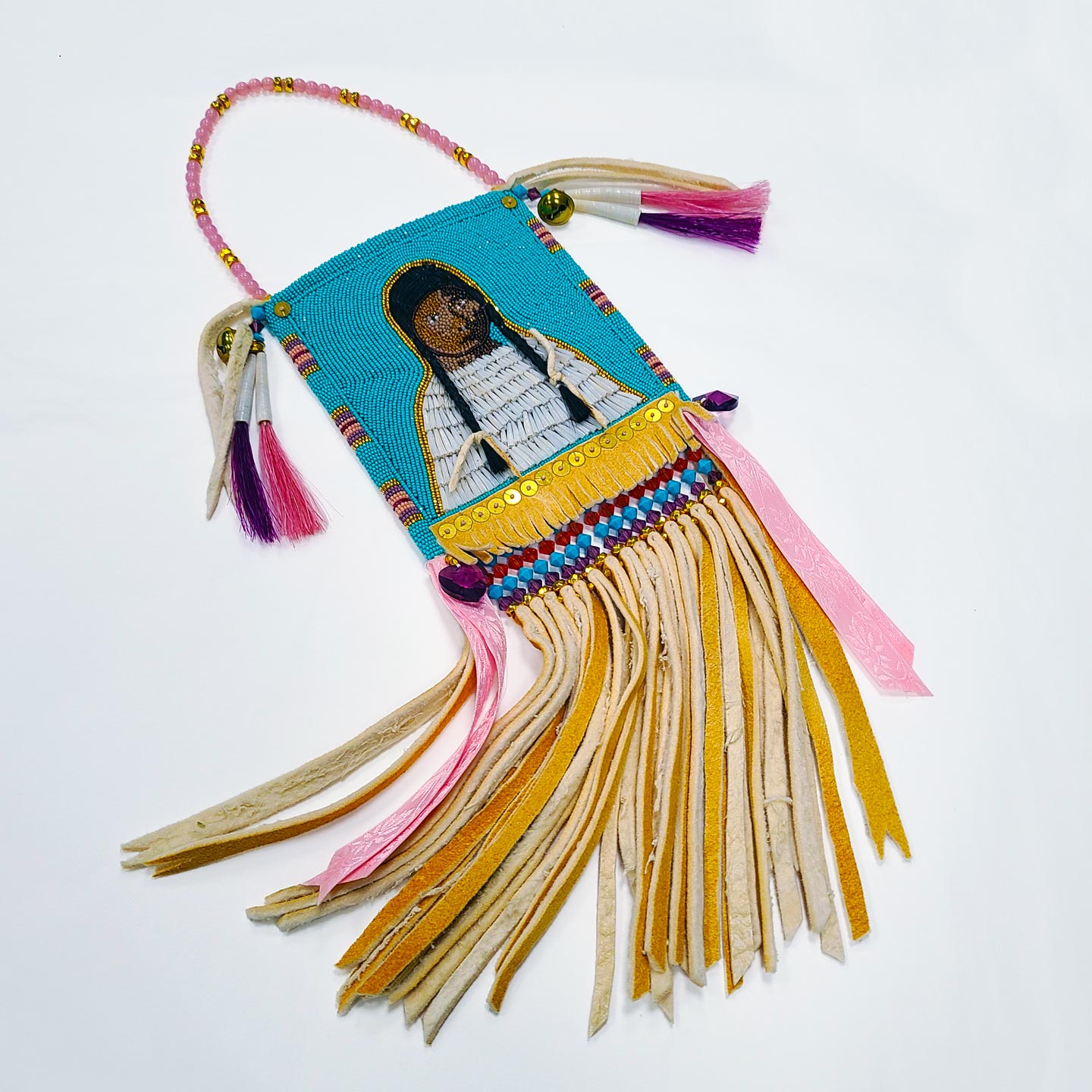