Description: Let us take you back to the Classic period of Mesoamerica lands, where civilizations thrived well over 1,000 years before the arrival of the Spanish. Societies flourished with sophisticated agricultural and irrigation systems, blue or red stepped pyramids, complex calendar systems, hieroglyphic writing systems, rituals, commerce, and warfare. The tropical mountainous highlands of Guatemala, lands of the Maya peoples, can get cool, especially during the rainy winter months. However, during the dry, warmer months, especially along the coast and low-land jungles, it is warm, sometimes reaching 100°F (38°C). For centuries, breathable tunics such as this one pictured, have been ideal for women to wear to maintain coolness.

Early Spanish records of Mesoamerica show a vast, abundant land upon their arrival, filled with crops such as maize, amaranto, tomatoes, cacao, and cotton. Due to its climate diversity, certain regions specialized in specific resources, which were then exchanged with others in other 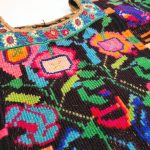 regions to access the plentiful lifestyle – especially for the elites. Cotton, a fiber used to weave elegant garments particularly for privileged women, was a popular crop for trade due to its various usages. The largest diversity of cotton species is found in Mexico. For example, around 3400 and 2300 BC, extra cotton that was not woven for their own purposes in a part of ancient Mexico was sent as tribute to Aztec leaders, which amounted to about 116 million pounds annually. (Beckert, 2014) As in many ancient civilizations in Mesoamerica, plants and plant cycles were central to knowledge seekers, knowledge holders, and creators of medicine and arts. The Maya used every part of the cotton, even to cure illnesses such as asthma, ulcers, and skin diseases. (Roys, 1976) To transition a plant seed to a textile production was no small skill and prized by many.

This unique Guatemalan garment, thought to have been acquired for Coe´s collection in 2007, is a reflection of pieces worn prior to the arrival of the Spanish. The blouse in the collection is a huipil worn by the Mayan women. A Náhuatl word, huipilli, means “my covering.” The textile covering is an interwoven collage of fabrics, bright dyes, and textures. Traditionally, the huipils were made from cotton and agave fibers and dyed with cochineal insects, seashells, coffee beans, and indigo. Upon the arrival of the Spanish, new dyes, patterns, and textiles were introduced and allowed the huipil to develop into the lavish garments we see today. For instance, other materials were integrated, such as silk and wool. However, due to the disappearing skill and costly process of weaving natural fibers, it is not uncommon today to find huipiles made out of synthetic fibers. Yet, revitalization efforts are in place in the hopes of restoring this ancient-old cultural patrimony.

Once only used for solemn ceremonial purposes, the huipil grew to become used day-to-day after 500 C.E.  From an early age, women learned from their mothers, aunts, or other maternal roles in her household the gifts of weaving. According to the Mayan story, the Grandmother Moon, or the goddess Ixchel, taught the first woman how to weave. Ixchel represents fertility, midwifery, and the rain and is famously shown as a young woman with a serpent on her head or an elder woman weaving. It was the goddess Ixchel who beckoned the divine feminine to venture into her womanhood abyss and pull out the webs of life for creation.

Weaving is a gifted relic of immeasurable cultural value and an inherited family household duty that generated women’s autonomy due to its age-old ability to produce currency and economy. Women weavers became highly skilled in time, as their production became increasingly reminiscent of the antiquities of the past. Because of its diversity, women use it to represent identity, clan, and community to which they belong. At times, one can see much of the woman’s story and her clan as she projects herself in an embellished garment of symbolic colors, patterns, and images.

The Mayas engaged in a dynamic relationship with their neighbors, including the Aztecs. In fact, since they traded textiles with each other, it was considered a currency. According to a 2018 publication in the Journal of Anthropological Archeology, “textiles underwent a process of monetization that saw them take on the roles of exchange medium, measure of value, means of payment, and store of wealth” in the late Classic Maya period (A.D. 250). While special spinning tools were being produced, cotton was grown in the Maya low-lands to provide a source of material for the extensive textile industry that composed most Mayan households.

According to the International Work Group for Indigenous Affairs, 6.5 million (43.75% of the population) self-identify as Indigenous in Guatemala, including the diverse Maya Indigenous peoples. Today, they struggle for political participation and to have their voices heard due to long-standing discrimination and marginalization. In addition, as in many other places of earth-based Peoples, their natural resources, including their lands, are being stolen or contaminated as private companies continue to pollute their rivers and groundwaters. Mayan women today in Guatemala are struggling to maneuver themselves out of poverty and become active voices in their communities. However, like Nobel Peace Prize laureate Rigoberta Menchú Tum, a K’iche’ Mayan Guatemalan human rights activist and feminist who founded the first Indigenous political party in Guatemala, Mayan women are ever more empowered to raise their people and reconnect with their community values.

The use of colors and symbols remains key in the Mayan textile garments. As seen in this piece, in particular, vibrant flowers of fuchsia, scarlet, purple, and sky blue are held by dainty green and indigo plant stems and curl or swirl upon reaching the bottom. A delicate neck border is diligently embroidered, paving the way for smaller, more dainty flowers and leaves of a different pattern of red and yellow on a celestial background, as if blowing in the wind. As symbols of life and fertility, patterns of flowers are common in Mayan textiles. Native flowers in Guatemala include roses, lilies, violas, pansies, gladioli, and cactus flowers. Can you tell which flowers these could be? 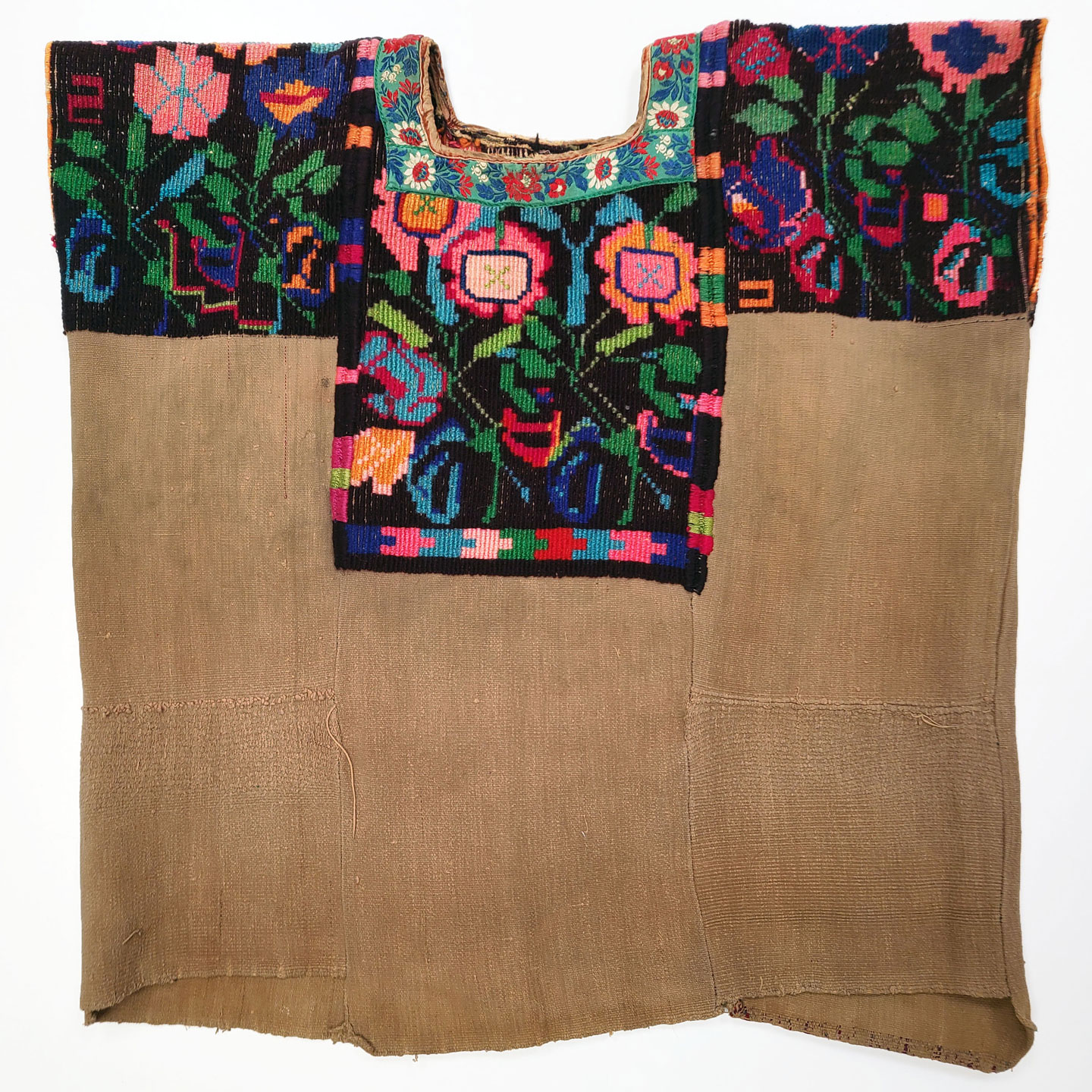