Description: Tibet is often thought of as synonymous with its religious identity of Buddhism, specifically, the Vajrayana, also called Diamond Vehicle. In conjunction, Tantric Buddhism was introduced. Tantric Buddhism is based on a series of highly sophisticated texts in their theological formation and was incorporated into Tibetan practice. How did this religion become so central to Tibet’s cultural identity?

In the 6th century BCE, Buddhism was born in India and quickly spread as it appealed widely to many peoples. Buddhism dispersed in two directions. The first one toward the southeast via the sea, and the second into central Asia, where it was adopted by nomadic groups. It moved eastward along the Silk Road into China, becoming popular by the Tang Dynasty (618-907 CE). Along its journey, Buddhism turned into the Mahayana school and only became more developed as it entered the highly scholastic traditions of the Tang. Mahayana is translated as “the Great Vehicle” with the “archetype of Mahayana practicing the bodhisattva, [a being] who seeks enlightenment while compassionately guiding others along the same path” (Singer 1998, 6). This tradition advocates that everyone, even a farmer, is capable of attaining enlightenment.

In 650 CE, the Tang Dynasty’s Princess Wencheng married the Tibetan Emperor Songtsen Gampo, introducing Buddhism to Tibet (Kapstein 2000, xvii). Before the introduction of Buddhism, Tibet had its own religion called Bon. Tibetan Buddhism was influenced greatly by this pre-contact religion, Bon, which can be seen in the local mythology and the Buddhist contexts written over the core story. The Vajrayana became a devotional practice with heavy importance on chanting and praying to a wide array of Gods and Buddhas in a highly symbolic and representational form.

Artworks were central to this religious practice, as visual representations were used to help an individual meditate (Jackson 1984, 9). Thangka’s are one of the higher art forms with this goal of meditation at its core. A thangka is an intricately painted canvas sewn onto an elaborate scroll and is often protected by a silk covering. These pieces were usually displayed only when used for meditation, at other times being carefully stored. Painters were some of the most elite craftsmen of Tibet. The subjects of these paintings ranged from themes of death aiding in rebirth to better understanding specific stories or religious practices. 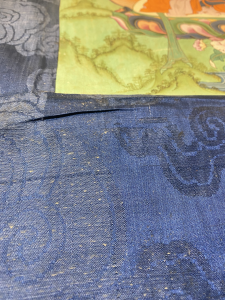 This particular thangka depicts the Guhyasamaja Tantric, one of the oldest written Tantrics in India. This seminar by Dr. Alexander Berzin explains the tradition’s basics and how to begin thinking within this form (there is a written script in “Outside resources”). The Guhyasamaja focuses on practicing of dissolution from death for a proper rebirth. The fundamental use of thangkas is to help understand complex teachings by visualizing them.

Within this thangka, we can zoom in on the practice of learning a religious action through meditation accompanied by the piece. A specific step in the Guhyasamaja Tantric’s process of dissolution is the Three Appearances. After the dissolution of the lower aspects (the physical body, liquids, mental activity, and energy), one reaches the subtlest levels of mind, which gives a certain clarity. The white appearance is luminosity or brilliance. The red appearance is hard to translate but can be understood as stronger light that helps attain clarity in seeing the true existence. Lastly, the black appearance can be understood as the threshold right before complete understanding, after which complete dissolution is achieved. 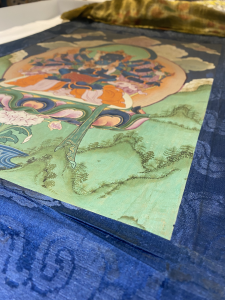 Within this thangka, at the top, white moon appears on the left side of the scroll and a red moon is to the right. They face each other as they also face the central figure of Ahksobhyavajra. Ahksobhyavajrao is painted as a black-blue figure, with his white face to the right and red face to the left. This thangka has the function of assisting meditation. So, we must ask, what does this multiplicity of the appearances within the central divine figure tell us about the teaching? How are these appearances meant to be internalized and used to reach the next step of disillusionment?

While contemplating the history of this piece, I found myself seeing the vast world of Tibet and its religious practices. Within this wonderful painting is advice about how one should best live. All it takes is to sit with the piece and allow it to seep in. To inhabit the same space and to contemplate it in the same way its original purpose asks for is an incredible honor.