Description: Ssanctified ssites stand ssteadily above ssacred ssocieties, circling within sstone ssculptures and elementss of deitiess and ritess… Corrosion of stories and the demystification of truth has allowed it to shed many many layers of skin, like the smiling snakes peering from beneath this Aztec bronze snake vessel. And yet, here it still stands before us all, as a token reminder of the past and the power it once represented.

Standing ferociously within their almighty Sanctuaries, the Aztec civilization was known to have been the last major source of power, before 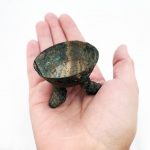 the arrival of the Spanish in the early 1500s. The Aztec culture of the “people from Aztlan,” originating in the post-classic period from 1300 to 1521 in central Mexico, organized themselves in altepetl or state-like units where each had their own ruler or emperor, land base, marketplace, and temple. Out of the many ancient civilizations in the Americas, the Aztecs are known for their fierce military power, art, and cultural hegemony before the arrival of the Spanish. Luxuriously displayed, as if rolled from a tapestry of silk and linen, their center of power rested in what is today the Valley of Mexico.

The founding of mighty Tenochtitlan around 1325 CE by the Mexica was based on a legend of when their god, Huitzilopochtli, an eagle and sun god, guided them to found their new homelands where an eagle perched on a prickly-pear cactus, eating a snake. And so, this sign was sought out for and realized to become the ancient city of Tenochtitlan, whose ruins are found still amongst the Spanish colonial structures that remain today in downtown Mexico City. The flag of Mexico happens to be this vision set forward by the legend.

Who were the Mexica (“Mesh-ee-ka”), and how did they become the Aztec civilization? The Mexica belonged to a broader Nahua pre-Columbian group, where Nahuatl was spoken and whose words we still use today (i.e., chocolate, coyote, avocado). Originally, they were nomadic peoples from the mythical territory of Aztlan, thought to be somewhere in northern Mexico and the southwest of the US. In time, the Mexica heard the calling from their god Huitzilopochtli to settle where they would find the eagle perched on the cactus, and thus they departed on their search for their new homelands. According to colonial records, the migrating Mexica group were rejected by other groups since the Mexica were considered uncivilized and of a lower social status. Finally, in 1325, they came across the sign of the eagle perched on the said cactus on an island of Lake Texcoco. And so they began the creation of their empire jointly with their allies Texcoco (Tetzcoco) and Tlacopan (today, Tacuba), or a Triple Alliance which together formed the Aztec empire. 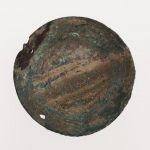 pathways, conscious of the nearby hovering pyramids; its vibrant crowded markets, such as the Tlatelolco market painted by famous Mexican muralist and painter Diego Rivera; the humming of the Nahuatl murmurs echoing throughout the passages and open spaces, and entrusting their fate upon their rulers or gods. You can even see the chinampas floating on Lake Texcoco, where on these sophisticated systems of floating gardens their most precious foods, like maize, beans, and amaranth, were grown and harvested. Fertile soils and the ability to nourish were key reasons why the Aztec society lasted for hundreds of years and why sacrifice and ritual rites were part of their covenant with their deities of sun, fertility, and life.

The Aztecs had many gods and goddesses, many of which were essences of the natural earth spirits. Scholars have identified more than 200 deities, including mystifying Tlalo—the good god of rains and storms, but also behind the destructive forces of floods and drought; father Huitzilopochtli—an eagle or hummingbird spirit and sun god, god of war, and of the powerful city of Tenochtitlan; the reverberant Quetzalcoatl—a feathered serpent, and deity of learning, science and culture, and self-reflection; magical jaguar Tezcatlipoca—a deity of the night, prophecy and fate; and finally the mother serpent goddess Coatlicue—who birthed all of the above, and rules over life, death and rebirth.

The use of the Aztec calendar brought forth from the Mayas was essential to embellishing the gastronomical options for the priests and lords and a tool that served to mark key aspects in life, rituals, and divination. The calendar determined the times of ritual rites of sacrifice, an important aspect of Aztec spirituality and balance. Human hearts and blood were offered, sometimes voluntarily, to their father-god Huitzilopochtli to keep the sun moving across the sky so that life may continue. Could this mysterious snake vessel that Coe so innocently picked up in one of his ventures in Mexico be used to offer the Aztec gods human elements?

Like many neighboring Mesoamerican civilizations, such as the Olmec, Maya, Toltec, and Zapotec civilizations, over generations, the Aztecs inherited gifts of traditions, capacities, and skills that involved stone sculpture and architecture, pottery, and stunning metalwork. These arts often represented living beings, including animals and spirits, created for religious ceremonies linked to fertility and agriculture. 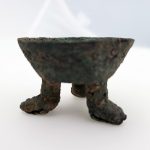 The use of alchemy to melt down, transform, and reconstitute new elements, forms, and beings, was one of these inherited traits the Aztec civilization was especially skilled at. They knew how to mold with copper and were known for their precious gold and silver ornaments.

Yet, bronze, such as the material of this dainty vessel, underwent a different life process. The making of bronze is not as easy as the element suggests, but rather, involves the careful alloying of copper and tin to transition to a liquid bronze state which can then be cast or forged into the desired formation. According to anthropologists on Aztec bronze objects, bronze may have emerged after the arrival of the Spanish, where the methods were taught to the Aztecs. (Phillips, 1925)

This bronze vessel, for example, even though corroded, exemplifies a finely tuned repository, with its sharp edges, smooth lines, and elegantly styled trivet-like stand. What were the characteristics of the hands who held this vessel?

Were they elegant, dainty, like that of an empress, that with a simple gesture of her hand could have anything she wanted? Or perhaps they were rough, blistered, and cut, eager to take on sacrificed lives and speak to the gods? Or maybe even long, lean, and calculating, praying for the collection of prophetic visions?

And where did it sit?

The making of this vessel also had its unique origins. At the time, Aztec artisans who specialized in metalwork lived and worked in their own quarters of the city, had a very special place at the emperor’s palace, and were highly ranked in the Aztec status stratification. Furthermore, such metalworks were made exclusively for emperors, the elite, and masters—the nobility. Hence, this vessel may have been an enigmatic source of beauty, power, and wealth and perhaps held the key to wisdom and riches. Very little is seen today of Aztec metalworks, due to the obsession of the Spanish to melt them back down upon conquest and turn them into coins.

From the conquering of cities to the embellishment of beauty and agriculture, and finally its last fight while being conquered, this object has seen many worlds. It has undergone many transformations, an alchemic being unto itself, perhaps being one of a kind. It has lived many lives and is built on many layers of skin, minerals, dust, and rust.

The Great Market AT Tlatelolco, www.mexicolore.co.uk/aztecs/aztefacts/great-market-tlatelolco.

Pell, Amanda. “Chinampas: What They Are, How They Work, and Why They Matter Today More than Ever.” Upworthy, Upworthy, 1 June 2019, www.upworthy.com/chinampas. 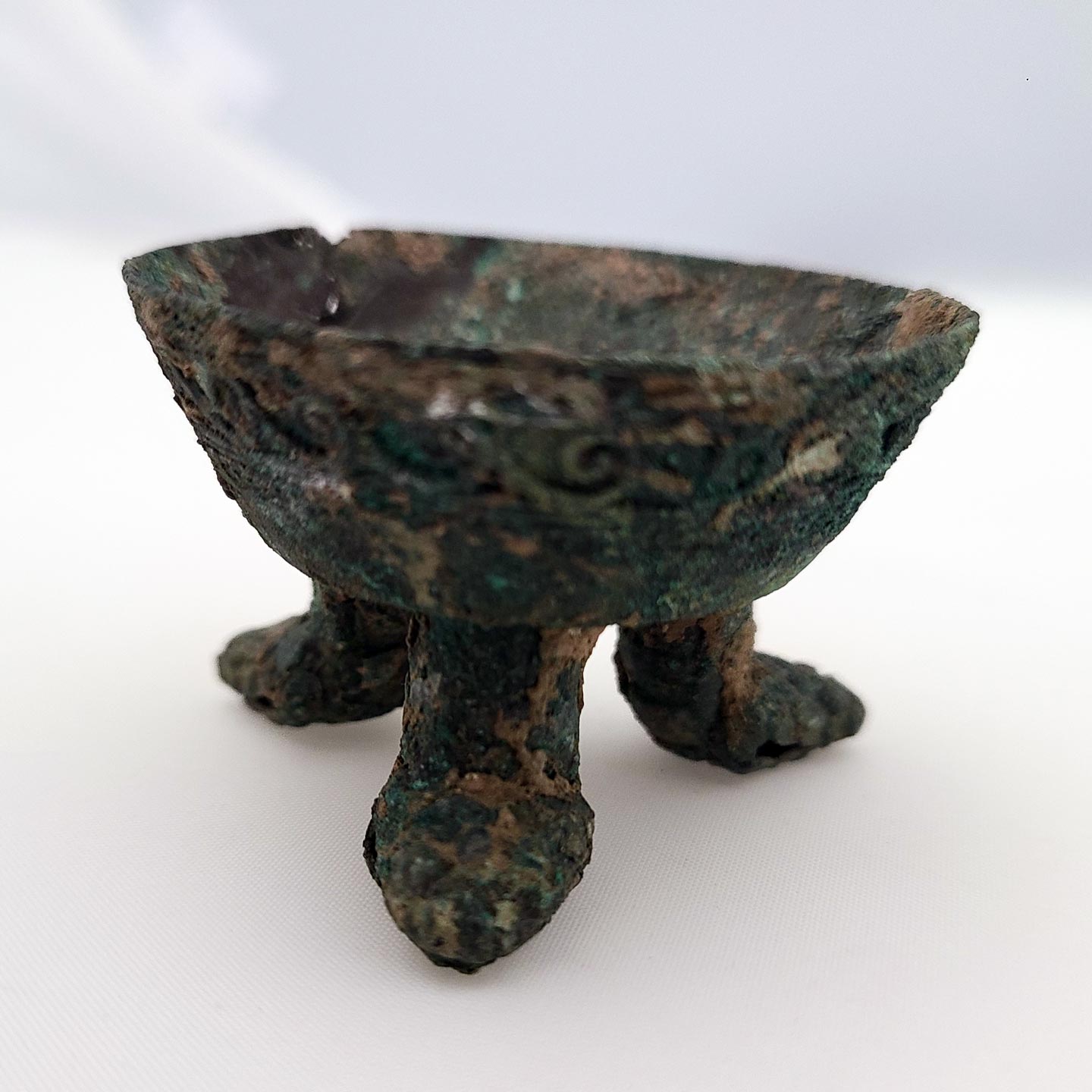