Description: The Coe is incredibly honored to care for three pieces by artist Steve Smith (Kwakwaka’wakw). These pieces, including this painted maple wood bowl, are striking examples of Smith’s early experiments in form and style. Smith has been painting and carving since the late 1980s,

having learned directly from his father. Over the years, Smith’s work has continuously engaged with Kwakwaka’waka and Oweekeno styles of carving, painting, and design. His recent works show how this exploration has expanded—in scale, design, and color—in stunning results.

Here, in “Spiraling Inward” we can trace how Smith’s early works delve into the Kwakwaka’wakw formline style while allowing for space for creative inspiration and subtle shifts in design elements. Formline is the term used to describe the main feature of Northwest Coast two-dimensional design style. The formline is a curving line that undulates between thick and thin as it curves to create the bends or corners of standardized forms. Formlines are bound together across a field to make a final design. The basic shapes of formline are the ovoid and the U-shape, which work together to create balance and flow within an image, often portraying animals in full, partial, or overlaid form. The shapes and lines of formline are generally standardized within individual communities, making artworks from different cultures clearly recognizable to the knowledgeable eye.

“Spiraling Inward” expresses how Smith, at this time, was still using the common colors of Kwakwaka’wkw design, green, red, and black, while 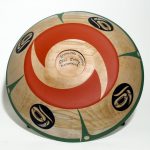 playing with both the negative and positive spaces of his imagery. There are unexpected swirls, elongations, and shapes within his formline. The movement of the green spiral twists its way in, not just from the outer lip of the bowl, but really beginning on the reverse side. This same green appears repeated within the formline design, playing with our eyes and challenging our interpretation of what is positive or negative space, what is spiraling around what.

When I first started coming to the Coe the objects that caught most of my attention were the baskets and shoes. I chose this bowl because also, where I come from, we are known for our baskets and moccasins. I’ve always seen the designs from New Mexico, and I noticed that this bowl is from the Northwest Coast, and I really was caught by the designs. The colors as well make this item very noticeable. I believe that all objects have a story, and the designs in the bowl tell a story that is carried on for many generations. Dynette Chavez (Jicarilla Apache) [The Mirror Effect: Reflections upon our Realities, Hands-On Curatorial Program exhibition MayJuly 2017] 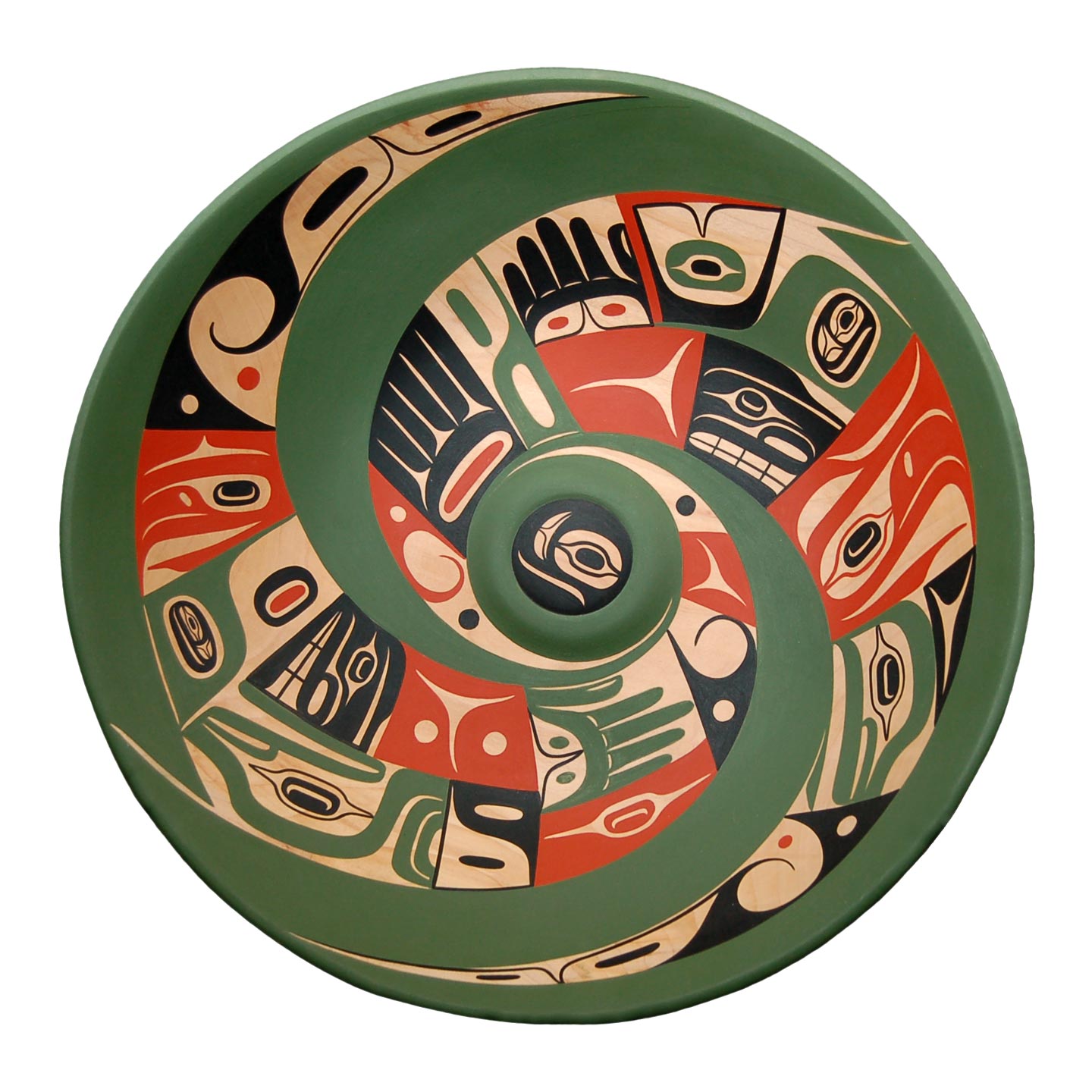