Description: This crown, and other similar crowns, are part of Pan-Indian ceremonialism and are widely made and worn throughout Indian Country by Indian Princesses. The artist Bruce Caesar has a long list of commissions for these pieces. In this crown created by Caesar, the peyote bird is depicted in a feather circle. This bird carries the prayers upward into the spiritual realms. Indian Princess is the term used to honor Southern Plains, young Native women.

In a recent conversation, Bruce told me he had little time to make anything besides crowns for which he has a long order list. The artist Teri Greeves added that every Indian princess in Oklahoma wants to wear a Bruce Caesar crown.

Ted Coe wrote about this crown, Bruce Caesar, the son of the late Julius Caesar, has carried Southern Plains silversmithing to new heights of elegance. In this piece, he applies his sense of invention, exquisite detailing, and command of openwork design to the tiara-type crowns worn by Indian Princesses after their appointment to that office. 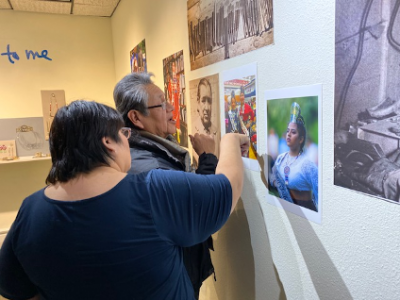 Above image: Bruce and his daughter Krystal counting the number of Bruce Caesar made crowns in a recent Wichita tribal celebration.

Bruce Caesar was born May 12, 1952, in Iowa City, Iowa. He represents the third generation of metalsmiths in his family. Nickel or German silver, a nonferrous alloy of nickel, copper, and zinc, was invented in the early 1820s. Its hardness and ability to take a shine soon made it a preferred metal for many Native American artisans, particularly in the Southern Plains region.

When he was just a young boy, Bruce learned his art from his father, Julius Caesar. Bruce remembers starting to work with metal when he was seven years old. By the time he was nine, he was demonstrating jewelry-making in craft shows with his father. His apprenticeship with his father was long and intense, and he continues to build on his father’s legacy by incorporating lapidary work into his designs and signing his more elaborate commissioned pieces.

Julius Caesar was widely recognized as an accomplished and creative Native American craftsman working in German silver and won many awards for his work. He was a distinguished artist who worked exclusively at his metalwork for almost fifty years. He first learned the craft from Hiram Jake, a Pawnee jeweler, and later studied with Bill Leaf, a Meskwaki metalsmith. Working in both traditional and contemporary styles, Julius Caesar was America’s best-known German silver jeweler. Julius was not only a superlative craftsman but was also a historian and teacher. As he traveled across the country exhibiting and demonstrating his work, he researched and recorded tribal variations in motifs and symbols and then incorporated them into his own styles. Julius and Bruce are credited for the revival and continuation of Southern Plains metalwork. Bruce taught metalwork to his son, Adam Caesar, who is now an accomplished metalsmith too.

Bruce Caesar has embraced the tradition of Southern Plains metalsmithing while finding his own unique interpretations of traditional motifs. The thoughtful, refined designs of his jewelry can be, in his words, “as simple as a sentence that conveys a thought or as deep as an essay that conveys a whole belief.” His work has won many awards and has been featured in major exhibits, such as “Contemporary Southern Plains Indian Metalwork,” sponsored by the Indian Arts and Crafts Board, and in articles in Oklahoma Today and Native Peoples magazines.

As time permits, Bruce offers demonstrations for schools, museums, and galleries. He enjoys teaching young people, and his son Adam has been his principal disciple. Bruce’s work continues to balance tradition with an adventurous outlook toward design possibilities. As he put it, “I’ve never had a helmet or a hubcap ordered yet, but I’m sure in time one will come along.”

Bruce visited the Coe in December 2019 to celebrate the opening of How It Was Handed to Me: The Caesar Family Legacy, organized by Kenneth Johnson (Muscogee/Seminole), which gathered jewelers and jewelry from New Mexico, Oklahoma, and beyond into a complex story of generational and creative legacies. The Coe exhibition was the first to be mounted in Santa Fe that focuses on Plains jewelry created from nickel (or German) silver. 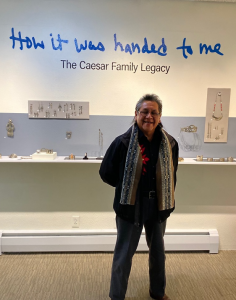 To view a short video of Bruce Caesar describing how it was handed to him, click here.

And watch artist Jhon Goes in Center speak about this piece on Collection Spotlight. 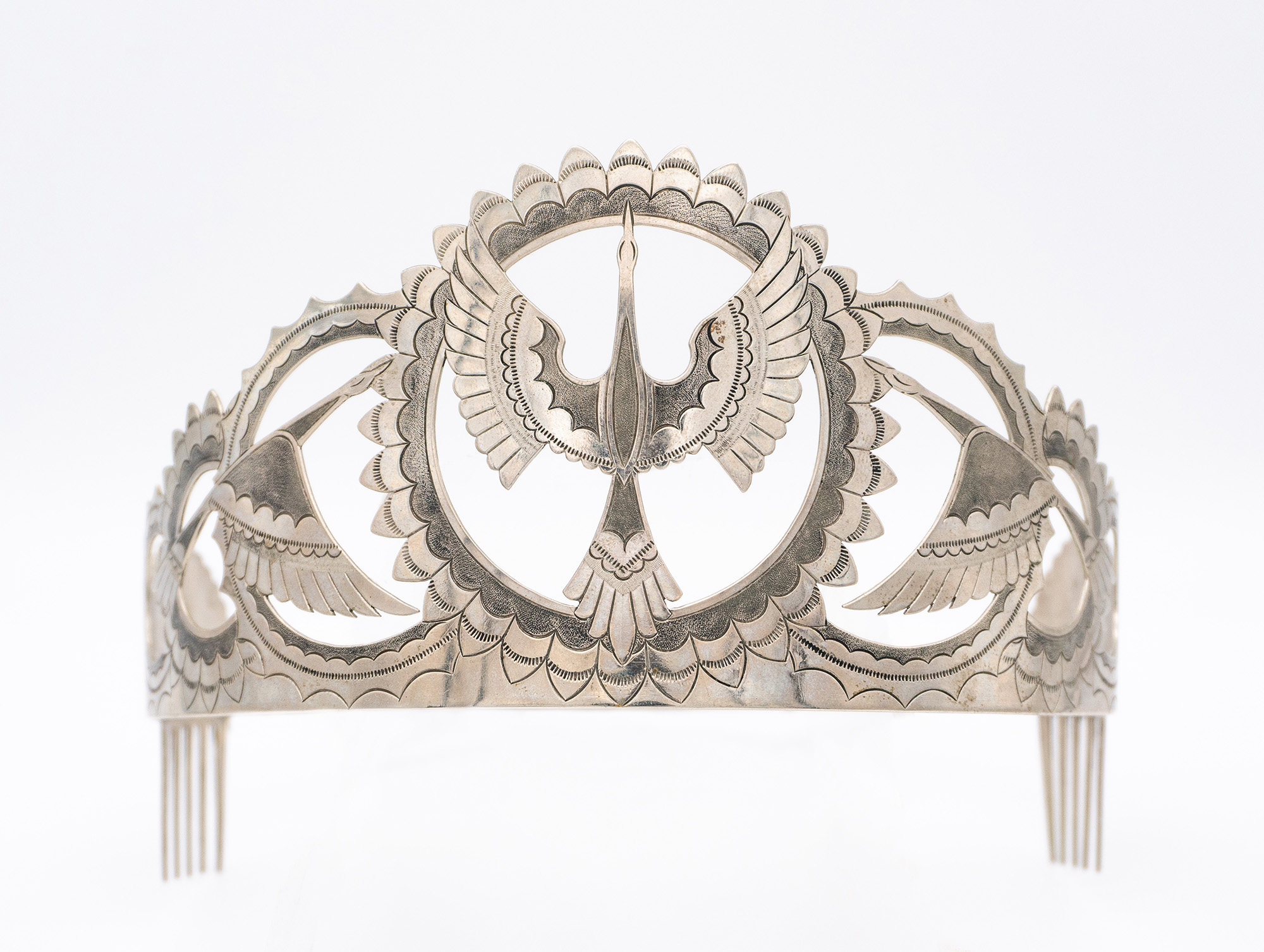