Description: David Frank’s faithful depiction of an Orca demonstrates a close observation of these sea mammals. The whale seems 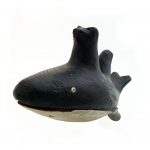 to be suspended in the moment of breaching the ocean’s surface. Unknown to us is whether or not the whale realizes it has a bear hitching a ride on its back. The rattle was made in two pieces attached together, painted, with beaded eyes, and a red mouth. Small pebbles are in the whale’s body. The rattle’s handle sits below the tail.

The bear sitting atop the Orca may likely represent a Nuu-chah-nulth cultural narrative in which a bear transforms into a whale, a story of personal growth and cultural awareness. Frank’s production of this rattle informs us of the strength and continuity of Nuu-chah-nulth people who continue to live in their ancestral homelands on what is known today as Vancouver Island.

One of the Coe’s student curators wrote about this rattle for their 2017 exhibition, “The Mirror Effect: Reflections upon our Realities”: “To the Nuu-chah-nulth tribe from the Northwest Coast, whaling was an extremely important aspect of their identity, culture, and traditions. Whales were a source of sustenance for the Nuu-chah-nulth as well.”

But perhaps this rattle is more than wood and paint, more than a description and of its color and form, and more than a comparison to other Pacific coast rattles. Close looking might help us see the intangible virtues with which Frank made the rattle.

I wrote to a friend to help prepare this article. Here is what he said about the rattle and David Frank. “I remember David Frank from Ahousat…in the Tofino area in the late 70s, early 80s. David was quite elderly then, and known at the time as a canoe builder, though 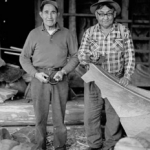 he wasn’t doing any of that work at the time on a regular basis. He’d made one near that time with the help of a young American that I remember seeing…. I didn’t know he worked at Thunderbird Park in Victoria, which would have been after Mungo [Martin] died in ’62, I suppose.” For more about Thunderbird Park click here.

In 1964 Frank was invited to Thunderbird Park to work in front of the public, carving a canoe. Adjacent to the Royal British Columbia Museum, the park remains a popular place to experience the region’s rich First Nations art heritage. The rattle appears to date from his time at Thunderbird Park. While it was certainly an economic opportunity for Frank, more importantly, it was a further extension of an opportunity to express his cultural authority and ownership.

Frank comes from an unbroken line of male carvers. Sharing his unique rattle with visitors, in a space organized by the city, is a deconstruction of these non-Native people’s judgments and misperceptions that led them to believe they were purchasing a tourist object and watching a demonstration to assist with First Nations preservation and retention of First Nations culture. 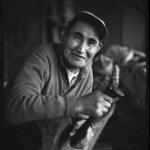 It is a bit of absurdity that a Canadian Governmental entity would, after a century of usurpation of land and resources, now work toward preserving what it so diligently tried to destroy. Moreover, Frank had lived through an era of strict Government laws prohibiting the practice of Indigenous religion and culture. Considering Frank’s own life of having survived these horrible circumstances, it is doubtful he would arrive in Victoria believing the foreign city or its Government would help him understand his heritage and help preserve and fortify his heritage and family. He voluntarily arrived in Victoria and no doubt with the understanding that he would be sharing some of his heritage and interacting with non-Indigenous peoples.

Frank stands on the left with an unidentified carving-partner in the Thunderbird Park carving shed, 1964. Courtesy of Vancouver Public Library. Accession number 88568

Let’s talk for a moment about this rattle’s uniqueness. There is little doubt that it is different than other rattles. As my friend said, the rattle is not a type or style that he is familiar with. What were David Frank’s motivations in making such a unique object? Succinctly, in creating it for the non-Nuu-chah-nulth population, his conceptualization and production of the rattle is a generous act–through the rattle Frank shares insights into his worldview and his community’s relationship with whales. We might suggest that he veers away from creating a rattle that could be more generally understood as Nuu-chah-nulth to preserve and protect his community ideologies and cultural practices from the outside world. The rattle is both an open and closed door to learning and sharing but only as far as determined by Frank’s carving. 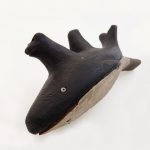 If the rattle doesn’t fit into the Northwest Coast or a Nuu-chah-nulth rattle genre, it makes it easy to put it aside or discount it as tourist art or made for people outside of the Native world. I use the word “discount” in association with “tourist” to connotate the perceived reduction of value, meaning, and significance—an entirely false conclusion. Tourist art is supposed to signify for consumers that the original or authentic use or purpose has been compromised by Native cultural change and by the maker’s thoughts of receiving a cash remuneration. To carry this argument to its furthest edges, some suggest that people who buy tourist arts are buying cheapened items that can be passed off as authentic because the buyer does not know enough about the culture to distinguish between authentic items made for home use as compared to inauthentic objects made to sell. This derogatory classification is further amplified by suggesting money is the driving factor in making things for sale. Clearly, somehow and somewhere in this distinction Indigenous sentience, efficacy and authority are lost.

The distinction of authentic and inauthentic is a non-Native construct that provides a false premise for museums and collectors to obtain and evaluate what is a genuine Indigenous object and through possession of the object, have a role in preserving Indigenous culture. In addition, these so-called authentic objects, once stripped of cultural contexts, meanings, and values, can be placed on a pedestal and pointed to as art defined by imposed aesthetic qualities that anyone can see and interpret as compared to a beautiful and meaningful object that lives within the Indigenous maker’s cultural and artistic continuity and understanding.

It might be more appropriate to provide David Frank control of his artistic production. His thought process is manifest in the rattle, so why is it that outsiders are so quick to label it and dismiss its ascendant qualities?

Perhaps we need to move beyond our assumption that cultural commodification is necessarily exploitative. Consider the point of view that Frank’s rattle, like other items produced for the market, illustrates the processes by which Indigenous people assert control over the Northwest Coast art industry, reshaping it to reflect Indigenous models of property, relationships, and economics. Might we better consider the rattle and Frank as a pioneering Indigenous entrepreneur finding ways to cultivate more equitable relationships with the non-Indigenous worlds?

David Frank’s community, Ahousaht, is one of fourteen distinct, separate, but inter-related First Nations that organized themselves in 1958 through the creation of a Tribal Council, an assembly or congress of nations. In 1978, the Council adopted Nuu-chah-nulth as their name, replacing the misnomer “Nootka” by which European visitors first identified the western Vancouver Island First Nations.

The Nuu-chah-nulth Nations for millennia have thrived on the abundant natural resources of fish, endangered today by commercial fishing, environmental calamities, and climate change. They were the only Pacific Coast First Nation that hunted whales. Whaling was essential to Nuu-chah-nulth culture and spirituality. It was reflected in narratives, family names, songs, and place names. Their dugout canoes were explicitly built to handle rough ocean waters and to tow the heavy mammals back to their villages along the beach. But throughout the twentieth century, Government policies and environmental groups fought to prohibit people from their traditional whale hunts. Today, there is a restoration of the cultural tradition of whale hunting.

In the late 1980s, another Indigenous restoration of traditional culture began, First Nation Canoes. Revitalizing sea-going large boat canoeing and the protocols attached to them play a central role in cultural revitalization and resilience for many Indigenous nations of the Pacific Northwest. The revitalization of canoe culture is most visibly present in Tribal Journeys, a weeks-long paddle, and gathering of Indigenous nations that annually brings together thousands of Native American/First Nations citizens. For more information click on these two links: The Tribal Canoe Journey, An Odyssey to Reclaim Tradition and Territory and Historic Gathering of First Nations canoes takes place in Vancouver.

With the diminishment of restrictive policies and laws and needed militancy to bring about government change, it should be clear that preservation, restoration, and revitalization happen at the bequest of First Nations communities like Nuu-chah-nulth. Our enjoyment of the rattle is only heightened by knowing cultural contexts. The rattle is beautiful to behold and extravagant to hold. Seen within the strength and authority of the Nuu-chuh-nulth community, its beauty is enhanced and amplified. 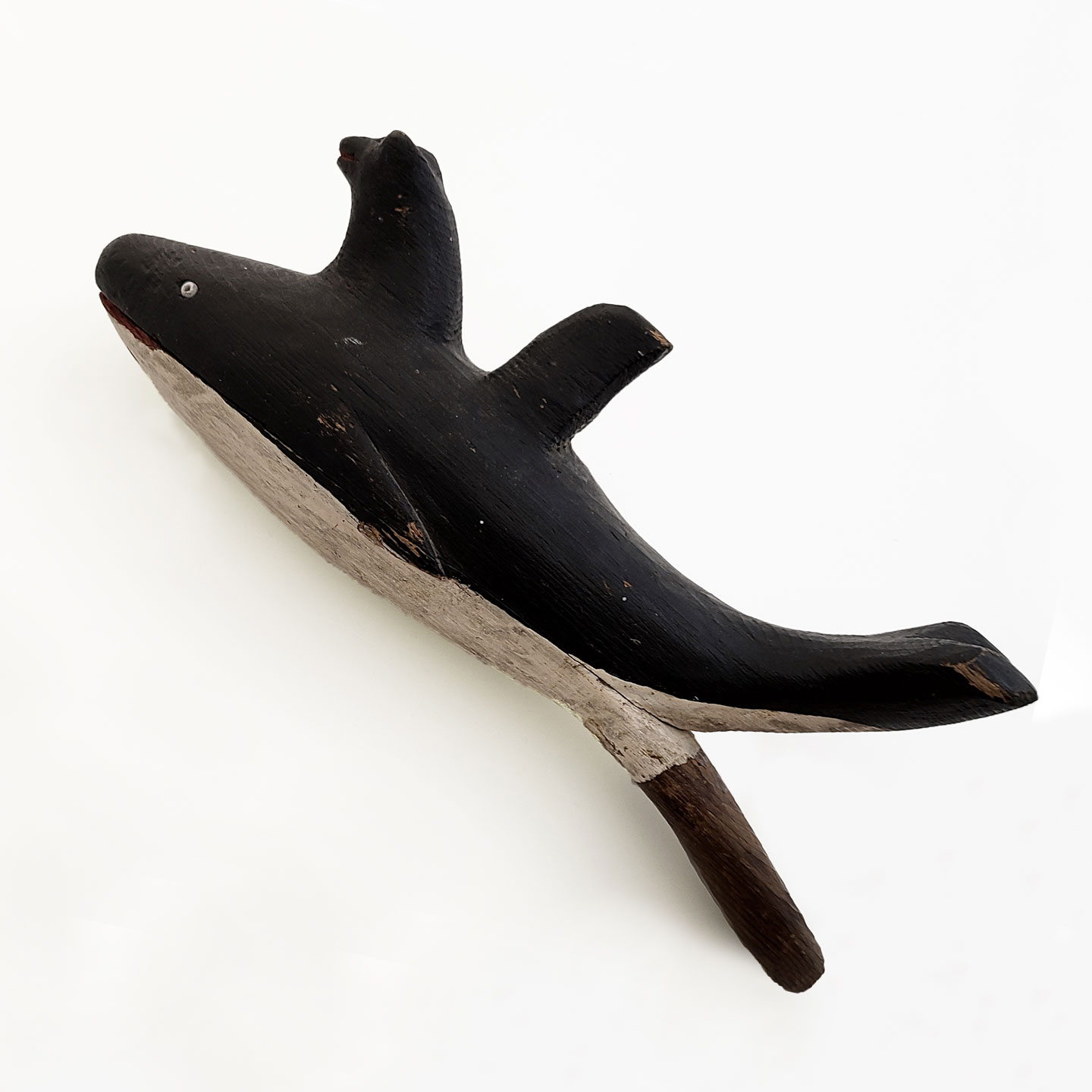